17 developments underway along the Hwy. 290 corridor in Southwest Austin 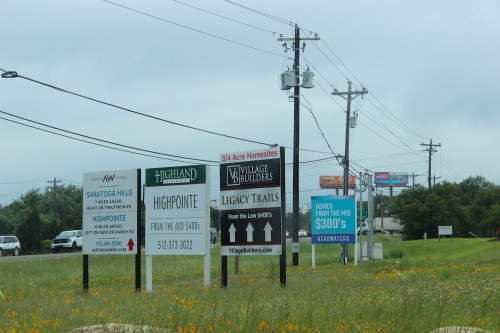 Along Hwy. 290 in South Austin, signs of new and developing housing communities are plentiful.

Signs of development have steadily cropped up along Hwy. 290 between the Y at Oak Hill and Dripping Springs for the past several years, with both commercial and residential developments impacting the community southwest of Austin. Currently, at least six commercial, seven residential and four mixed-use developments are underway.

John Endendyk, a partner at Endland Properties Group, currently represents two sites master-planned for potential development in Dripping Springs with access to Hwy. 290 and also brokered the sale of Big Sky Ranch, which is now under development by Meritage Homes. He said he focuses on this area for a reason.

“The area is very attractive to buyers and tenants due to the great schools, impressive demographics and beautiful Hill Country setting,” Endendyk said. “We do not expect this growth to slow down anytime soon.”

On either end of the 14-mile stretch of Hwy. 290, major changes are planned to accommodate growth. Upcoming construction of the Oak Hill Parkway project is expected to relieve congestion around the Y at Oak Hill. Similarly, the city of Dripping Springs recently received $43 million from the Texas Water Development Board supporting expansion of its wastewater treatment plant, which the city has named a necessity for its growing community.

“When we evaluate projects, school districts are very important,” said Matt Matthews, division president for Freehold Communities, the developer for Headwaters. “Dripping Springs ISD is a highly prized district. That’s certainly something we find as important.”

In addition to the school district, Matthews said many of Headwaters’ existing residents have migrated from South Austin in search of a more natural setting. Headwaters homes lack “backdoor” neighbors, reserving a back porch view of the Texas Hill Country. Natural views are a priority shared by other housing developments in the area, including Saratoga Hills and Belterra.

Belterra Village became a marker of Hwy. 290 development when the project began in 2017 alongside the Belterra residential community. Now, both projects have seen significant progress and are in new phases of development.

The residential development is in the midst of its second phase. The Belterra Village shopping center is at 95% capacity, with plans to move forward with an as yet unnamed apartment complex, said Daniel Campbell, the Endeavor Real Estate representative for Belterra Village.

“I think it’s complementary,” Matthews said. “Even though it’s not our project, we’re working closely with the commercial development to create cohesiveness.”

Smaller commercial developments are underway along Hwy. 290 as well. The Windmill Center, at the intersection of Hwy. 290 and Drifting Wind Run, is scheduled to bring retail space and a 4,500-square-foot restaurant to the area this summer. Similarly, Sawyer Ranch Business Park will offer space suitable for retailers, medical offices and restaurants on Sawyer Ranch Road.

Stand-alone businesses, such as Extra Space Storage, have reserved space along the high-development corridor as well.

What makes the western stretch of Hwy. 290 appealing—views with fewer interruptions, elbow room and a wide sky—has also made it challenging.

Some developments have scaled back plans due to red tape, such as the Live Oak Springs development along FM 1826 near Hwy. 290. Originally planned to include 82 homes, Live Oak Springs was reduced to a proposed 30 homes at the end of 2018 after the Austin Zoning and Planning Commission struck down an environmental variance to build a bridge over Slaughter Creek. Live Oak Springs has not made announcements about progress or a new timeline since the change.

Others have had to significantly adjust their construction schedules. Junction Athletic Complex, an indoor-outdoor sports facility near the Y, was announced by owners to be a month away from breaking ground in August 2017. Now, the project still awaits final approval from the Texas Department of Transportation after receiving approval for a number of variances from Austin’s boards and commissions in March. Located in Austin’s extraterritorial jurisdiction, plans for Junction Athletic Complex faced pushback from neighbors concerned with noise and light that might come from the facility. Others expressed concern for increased congestion and the size of the development.

Matthews said artificial light was an issue for developers in Dripping Springs and its extraterritorial jurisdiction as well, since Dripping Springs is a Dark Sky city with strict regulations in place to keep stars visible.

“Dripping Springs is very invested in how they want their city to be developed,” he said.

Jason Lutz, planning director for the city of Dripping Springs, said meeting Dark Sky regulations is an attainable goal for developers, who are not restricted from placing outdoor lighting but must follow certain rules, such as keeping lights downward-facing. Lutz said he thinks Dripping Springs generally poses less restrictive oversight for projects compared to Austin.

“It makes it difficult for folks to enlarge their homes and businesses,” Lutz said.

Plans are moving forward, however, for expansion of the city’s wastewater treatment plant. Lutz said some businesses may connect to city sewage lines within three years. More widespread extension of sewage lines, however, would likely take a big developer investing in such an expansion, he said.

As for regulations such as Dark Sky, Matthews said these were in fact a draw for Freehold, since they hope to prioritize preservation of the natural landscape.

“[It] has a lot of character,” he said of the area. “It still has that small-town personality we value.”