Veramendi’s commercial development is on the horizon 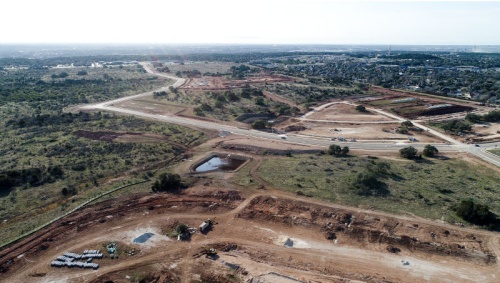 As ground breaks on the first single-family neighborhoods in the 2,400-acre Veramendi master-planned community, its developer—ASA Properties—is moving forward with the second phase of the project.

Construction will begin on commercial office space and a retail complex located on Loop 337 later this year, according to ASA Properties CEO Peter James. ASA is also looking at moving forward on a few storefronts in the next few months, he said.

“We are talking to retailers,” James said. “At this stage we are in confidentiality. ... The whole concept of our retail is for it to be lifestyle retail. It’s definitely going to lean more toward the independent boutique type of retail rather than larger chains. [We are] providing an alternate product to what’s being provided elsewhere up and down I-35.”

“It creates that authentic mix-use environment where people are there from 9 a.m. to 9 p.m.,” Harford said, adding that his vision is for people to be able to park their cars and spend the day shopping, dining and socializing.

“You can actually go to Veramendi and wander a 5-mile trail along the amazing parklands and then come back to the retail and recreate your way through the afternoon,” James said.

While high-end housing is part of the plan, James said the initial release of single-family homes will start in the mid-$200,000s.

“The diversity mix within Veramendi is in our agreement with the city,” he said.

Georgetown resident Lauren Reny is relocating to New Braunfels with her family to be one of Veramendi’s first residents. Her home will be constructed by Pulte Homes and is expected to be completed by September.

“We looked at other neighborhoods, but we learned that Veramendi will have 500 acres of open space, so that will be good for our family because we’re so into the outdoors,” Reny said.

Concerning major infrastructure, Harford said a regional stormwater dam is in the approval phase with the city and state with construction expected to commence in the middle of the year.

“We’re working very closely with [New Braunfels Utilities on infrastructure] all the way with their top leadership and operations guys to make sure that we get those right,” he said.

Additionally, construction is beginning on Veramendi’s second street—Word Boulevard—and work on the development’s center road is expected to begin this year. James said the road will run beside the site for the new Christus Santa Rosa Hospital campus. Although the hospital will not see anything on the ground this year, James said architects are on board to develop the plans.

Howard Payne University is also a major player in the development’s future with plans to construct a new campus. James said ASA will have a better idea on the direction of that endeavor later this year.

The latest numbers show that Sector Plan 2 is expected to bring 9,883 jobs—almost 3,000 more than Community Impact Newspaper reported in December 2017.

Neal Linnartz, president of the city’s 4B Board, said Veramendi will create some primary jobs that will bring dollars into New Braunfels from outside communities, and the medical offices and HPU will likely create higher-paying jobs. He added that Sector Plan 2 is estimated to bring $1.3 million in sales tax dollars to the city annually.

“We’re just excited to have [Veramendi] here as a partner,” Linnartz said.

Beyond Sector Plan 2, James said the future will hold a resort hotel precinct near the Guadalupe River, a town center and emergency service operations.

“We’ll launch sector plans as long as the demand requires, and that will progress over the next 10-15 years,” James said.

More apartments and single-family neighborhoods will be incorporated as the project moves on, as well as a senior-living product.

“We’re certainly looking very closely at the retirement market,” James said. “We want to have the whole mix within Veramendi as part of what we’re providing, and we’re just working on that whole model at the moment.”