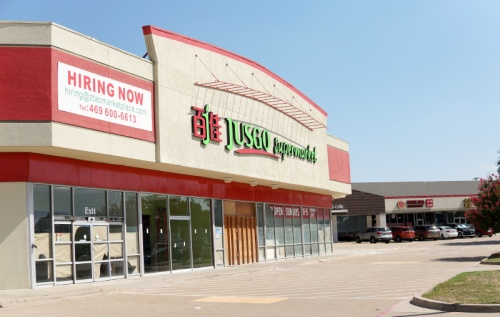 Twelve new businesses have opened at this shopping center since 2017 or are coming soon.

When two shopping centers located at major intersections in Plano quietly changed ownership back in July of last year, a slew of predominantly Asian businesses began moving into some of the vacant storefronts in quick succession. More are poised to open soon.

Acquired by real estate developer Jian “Leo” Liu, the centers are now under the ownership of two of his companies: DFW Chinatown Coit LLC and Asian New Century Square LLC.

Details about plans for the future of the shopping centers, one of which is located at the intersection of Coit Road and Park Boulevard and the other at Custer Road and 15th Street, remain unclear, as multiple requests for comment from Liu have not been returned.

However, the DFW Chinatown Coit shopping center appears to be further along in the number of restaurants and businesses it has opened, and may shed greater light on what is in store for the Asian New Century Square center.

“I’m starting to see a growing trend of having these hubs where everything is available in one place, and it just makes it easier for people to access what’s familiar to them,” Pang said. “To go to another city might not seem like that big of a deal, but it’s kind of like the neighborhood grocery store for some people. ... It just makes sense in Plano.”

And as the Asian New Century Square center is currently undergoing multiple interior construction projects, as well as alterations to its facade, a new flood of businesses and restaurants is expected to come.

Elliott’s Hardware once leased one of the largest storefronts at what is now the DFW Chinatown Coit shopping center—that is, before it accepted an opportunity to relocate to a new shopping center across the street in 2016.

Construction at the former Elliott’s Hardware location for a large grocery store, Jusgo Supermarket, is still underway, and more business owners are still opening up storefronts at that location.

As of this edition’s print deadline, 10 new Asian businesses had opened in that shopping center since 2017, according to a Community Impact Newspaper review of the property.

And the practice of redeveloping shopping centers and placing a supermarket as an anchor tenant is common among Asian-style developments, said William Tsao, real estate developer and Pinnacle Facility Engineering president.

“They prefer to refurbish the existing shopping center, because to them, that regulation barrier is much lower than completely developing a new shopping center,” Tsao said. “Those are the repositioned shopping centers and they all have a grocery store as the anchoring tenant.”

Similarly, when grocery store chain Albertson’s moved out of its location at what is now the Asian New Century Square, construction for another large Asian supermarket soon began. Fresh Mart Supermarket is now open at that shopping center, and seven new businesses are either under construction or slated to open soon.

But there may be more in store for physical alterations of the Asian New Century Square center as tenants continue to sign new leases.

A series of six building permits approved by the city of Plano in June have allowed for the property owner to make alterations to the building’s facade. Some exterior construction at the Asian New Century Square center has already begun.

But Tsao said one of the main attractors for potential new tenants in the Asian-style shopping centers is a focus on providing plenty of food options.

“If you have an anchor grocery store, likely you are going to draw in a lot of restaurants,” Tsao said.

David Cho, a new tenant at the DFW Chinatown Coit shopping center, said he made his decision to sign the lease in part because he hoped he could tap into a specific client base.

“[PC gaming] is a really popular business that is going around Korea and China,” Cho said. “I was focusing primarily on those ethnicities, because they are more aware what kind of business this is and what to expect, so I guess that’s what my primary target was.”

Cho, a Carrollton resident, said he had considered opening his business, GG EZ Gaming Cafe, elsewhere in North Texas, but landed on Plano because of the visibility of the shopping center.

“The location itself is a busy intersection,” Cho said. “I’ve been visiting here for about 20 years now, so I kind of have an idea which place would be an ideal location for my business concept.”

And with similar developments opening up elsewhere in North Texas, such as a shopping center located at the intersection of Legacy Drive and US 75, or Carrollton Town Center, Pang said she wishes her family had similar opportunities when they first moved to the U.S.

“I’m Taiwanese-American myself,” Pang said. “My family had a restaurant growing up. That’s what brought us to the U.S.—to help expand my aunt and uncle’s restaurant business.”

According to the 2016 American Community Survey, the percentage of Asian-Americans living in Plano is more than three times higher than that of the state of Texas. And because Plano has a higher percentage of Asian-Americans than other parts of the state, Pang said, it makes sense to have Asian-style developments in multiple locations throughout the city.

“All of this is so wonderful to see,” Pang said. “We were kind of off by ourselves when we first started our restaurant, and now you are starting to see these mini Chinatowns. I think it’s the closest thing that our cities will ever get to [having a] Chinatown.”

Correction: A previous version of this story mislabeled some countries including China and Japan as Southeast Asian. In fact, those countries are most commonly referred to as East Asian by the Council on Foreign Relations and other sources, while Southeast Asia refers to another region of countries that includes Vietnam, Thailand and others.