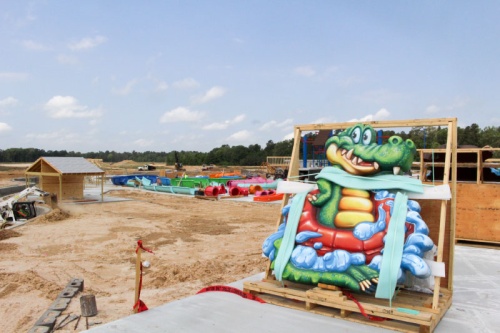 Construction on Grand Texas, Montgomery County’s first theme park project, made strides in May as developers prepare for the opening of two key attractions on the property following years of development.

Montgomery County was chosen as the location due to the lack of family activities in the area despite an abundance of communities with families, Grand Texas CEO Monty Galland said.

“If your family comes from out of town and you live in The Woodlands, where do you go to have fun in Houston?” Galland said. “You go to Kemah [boardwalk], but that’s a long way to go when you’ve got a great population here. We can be that destination.”

“You can’t just put out a cookie-cutter place anymore and expect people to come,” Brock said. “You have to cater to them, have exceptional customer service and be at a reasonable price.”

In addition to these attractions, Galland said development of Sportsplex—an area of the property consisting of tournament-quality sports fields and multiuse areas—will begin in September, and the development of the Grand Texas Theme Park—which will feature five roller coasters, dozens of rides and live entertainment—will begin in 2020.

Moreover, Galland said roughly an additional 1,000 jobs will be created by the numerous retailers and restaurants in the Grove Factory Outlets, which will be located on the east side of the park along Hwy. 59. The developer of the outlet mall has not yet been announced, but Galland said a developer should be confirmed in June.

Commercial development at Hwy. 242 and Hwy. 59 also continues, with a 104-room Best Western Hotel slated to open in late 2018 as well as an upcoming 12,000-square-foot medical office building. Marriott Fairfield Inn has also been confirmed as a future tenant within the development, Grand Texas officials said.

Kelley Mattlage, East Montgomery County Improvement District’s director of communications and community development, said the district is excited about the number of jobs Grand Texas and nearby developments will create.

“It’ll bring not only seasonal, but year-round [jobs],” Mattlage said. “[There are] plans to expand Grand Texas into a theme park, retail [and] hotel—it’s really exciting to see this kind of development.”

Mattlage said the district helped Galland find a site to open Grand Texas and is helping the park advertise for employees but has not provided any tax incentives. She said the district’s board of trustees approved an incentive package in 2015, but Galland did not accept it.


Growing the tax base

Along with the jobs the development is projected to create, the park will also function as a source of property tax revenue to Montgomery County and nearby Splendora ISD, officials said.

SISD Superintendent Jeff Burke said revenue the district receives from Grand Texas’ property taxes could help SISD manage the debt it has accrued from construction projects; however, SISD’s total revenue will not increase much because of the state’s funding formula.

“Districts, [such as] Splendora ISD, receive less in state aid when more taxes are collected by the district,” Burke said.

Grand Texas may not increase SISD’s total revenue, but Montgomery County Judge Craig Doyal said the county will benefit from its property taxes. He said the park is also likely to attract other commercial developments to the area.