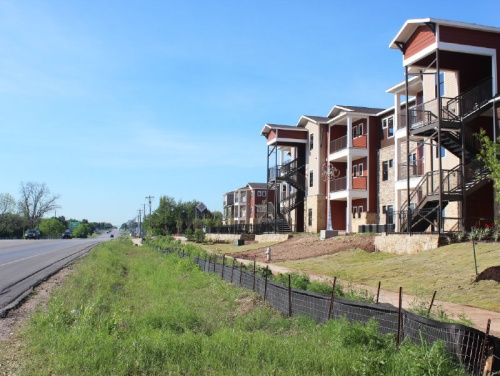 Residential development, like La Madrid Apartments, and commercial development continues along South Manchaca Road at the very end of the Austin city limits.

Development is booming along the South Manchaca Road corridor, which runs from south of Slaughter Lane to the unincorporated Manchaca community at the southern end of the road at FM 1626.

Recent and anticipated future development will bring close to 850 new residences to the corridor–a combination of single-family homes, townhomes, tiny homes and apartments by multiple developers.

Commercial development is also on the rise, with multiple businesses setting up shop along Manchaca Road to take advantage of the recent growth.

La Madrid Apartments, an under-construction community developed  and co-owned by O-SDA Industry owner Megan Lasch, is anticipated to be finished in May or June. Lasch said she purchased the vacant property in 2014, when much of the Manchaca corridor was still undeveloped.

“When we first came out here to purchase that land, we felt this was way out away from the city with nothing around, and now there are things everywhere,” she said. “We had a shopping center open next door two years ago, and now [Manchaca Crossing] is opening.”

Nicole Whiteside, an associate artistic director at Blue Lapis Light, said the dance company relocated from Oak Hill to 10331 Old Manchaca Road in 2015. A main reason for relocating was that the dance company utilizes natural spaces in its performances and art pieces.

“We liked the property [on Old Manchaca Road] because it was natural and in an undeveloped area, but that’s now all changing,” Whiteside said. “Hopefully people around here can accept us as an oasis among the other [more developed] properties.”

La Madrid Apartments will feature both market-rate and affordable housing units. Lasch said the project was partly funded through a partnership with the city of Austin’s general obligation bond program. Wolfpack Group also co-owns the property.

“There’s definitely a need [for affordable housing] in the area with a lot of the growth we saw,” Lasch said.

A second affordable housing project called Manchaca Commons Apartments designed by LDG Development will break ground in the coming months. It will be located less than a mile south of La Madrid Apartments.

MileStone Community Builders, an Austin-based residential developer, is currently developing four communities within a 4-square-mile area near Manchaca Road. Each community is at a different stage of production.

The three MileStone sites that are currently in production, which began in 2014 with Searight Village on Slaughter Lane, will add 320 residences at build out. That does not include the additional home sites at the proposed Summerow community, which has not yet broken ground.

A tiny home development called Constellation ATX will begin offering its 79 lots to residents this summer. Residents lease lots as space for their purchased tiny homes, which are typically 280-400 square feet and can house two people, developer James Stinson said.

Lasch said the location is convenient for residents working either in downtown Austin or in Hays County. New businesses being built in the area also offer additional amenities to the community that were not present previously, she said.

Henry Ross, who has lived in South Austin for 15 years, said he noticed the increased number of residents along Manchaca as well as the number of thriving businesses in the area. As a former restaurateur, Ross said he purchased the undeveloped property at 10701 Manchaca Road, Austin, with the prospect of opening his own restaurant. He is currently looking for a business partner to begin a project tentatively called Henry’s Corner.

“I saw that Moontower Saloon down the street had done such a fantastic job in the area, which encouraged us,” Ross said. “I saw an opportunity to build a cool full-service restaurant and bar. Something a little more upscale.”

Shelly Weiser, who opened The Hive in 2017, said she picked her location because she heard about the area’s anticipated growth and because the property allowed her business to be flexible. As the needs of the growing population change, Weiser said she can change aspects of her business to reflect it.

Compared to the hectic lifestyle found in Central Austin, she said South Austin is more “laid back” and for people who “still want to go out” but without the hassle of downtown.

Wafa Rivera, developer of the Manchaca Industrial Center in the Manchaca community, said the location was selected because the cost of development was reasonable and space was available compared to areas closer to Central Austin.

Chip Kidd, a real estate agent representing numerous properties in Manchaca, said developers are now looking at the area due to availability and because Austin has been pushing its presence and resources further south in recent years.

“Historically, development in Manchaca has been slower because of a lack of utilities,” he said. “Little by little, [the city of Austin] is expanding the city limits, and with that they are expanding the range of utilities. Utilities are on the horizon in some areas and some are already available. ”

Kidd said current transportation projects, such as the widening of FM 1625 and the construction of the SH 45 SW toll road, will bring more people to Manchaca as well.

“I would hate to see everything about this area get redeveloped, and I’m hoping along the way the developers will still somewhat keep the history of Manchaca,” Rivera said.

Austin corridor mobility spokesperson Mandy McClendon said growth on the southern end of Manchaca Road is a factor that points to area roadways needing infrastructure improvements. With funds secured through the 2016 mobility bond for preliminary engineering and studies of transportation corridors in Austin, the city is in the process of determining which areas should be addressed.

“Along Manchaca we recognize the development and growth potential and that the needs of the roadways are going to change with the community,” she said. “Our goal is to improve mobility and connectivity across all corridors.”

McClendon said improvements such as added turn lanes, traffic signals, signage and infrastructure for other modes of transportation could be proposed.