These Katy area developments are progressing in 2018 Katy Boardwalku2019s lake and walking trail are under construction near Katy Mills.

contribute today
Many of these commercial or residential projects were announced or in progress last year. Here is what is happening now.

Reina said the city will finish its work by March, but the rest of the boardwalk district is still in the planning stages. The Katy Boardwalk will have shops, dining, two loft-living apartment complexes, and a hotel and conference center on approximately 40 acres. KDW President and CEO Keith Dalton said he would likely have updates about the hotel in February.

2. As of Jan. 4, all corner spaces at the future Katy Asian Town were rented and major construction was complete. The shopping center, located at 23119 Colonial Parkway, Katy, will feature Asian restaurants and retail, including an H Mart grocery store and TONYMOLY cosmetics. The site broke ground in January 2017, according to broker RE/MAX United. No opening date for the 16-acre project was given while signs hanging at the site as of Dec. 19 included Tea Top, Mala Sichuan Bistro, 92 Haus Korean BBQ and others.

3. A new 37,000-square-foot, 900-seat Alamo Drafthouse movie theater is under construction at LaCenterra at Cinco Ranch. The project broke ground in May, and Dustin McMillian, marketing and brand manager for Alamo’s parent company Triple Tap Ventures LLC, told Community Impact Newspaper in early January that no official opening date was planned yet, although the project will finish this year.

4. Construction is on schedule for Marcel Plaza, a 10.7-acre shopping center on Westheimer Parkway between Roesner Road and Saddlespur Lane. Work began in March, and the project is about 90 percent complete. Jimbo Homeyer, land and lease acquisition representative for developer the Marcel Group, said the site will finish in April or May, encompassing more than 80,000 square feet of retail. Tenants include 9Round Kickboxing, a dance studio and more, Homeyer said.

5. University of Houston intends to break ground on its new Katy campus this spring after land acquisition slowed the construction timeline, according to  Mike Rosen, executive director of media relations for the UH system. The 46-acre project will open in the fall 2019 semester in the northeast corner of I-10 and the Grand Parkway. The campus will cost about $32 million and host about 2,000 students from the UH flagship and UH Victoria campuses.

6. More tenants were announced for Katy Ranch Crossing’s fourth and final phase in December. The retail center is located at the corner of Katy Fort Bend Road and I-10, and it is part of a mixed-use site encompassing office space and a 318-unit luxury apartment complex. Property Manager Ed Friedman of Freeway Properties said most of the final  construction for the 1 million-square-foot retail center would be complete by mid-February. Taco Cabana, Navy Federal Credit Union and GlowZone, an indoor physical challenge course, will open this year, according to Evergreen Commercial Realty President Lilly Golden.

8. Goya Foods is on track to finish the expansion of its Waller County processing center in April. Located at 30602 Goya Road, Brookshire, the 380,000-square-feet building, which opened in 2014, will add 324,000 square feet. The new space will hold a production warehouse, distribution warehouse, production office and auxiliary buildings. Once construction is complete, Goya will eventually hire 30 more workers.
Evelio Fernandez, vice president and general manager for Goya Foods of Texas, said most of the facility’s workers come from the Katy area. The Brookshire site produces more than 1,000 cans of food per minute and with the new space, it will add 31 truck docking doors for a total of 54, spokesperson Mayte Sera Weitzman said.

Fernandez said the property has as much as 350,000 square feet on its southern and eastern sides for another expansion.
SHARE THIS STORY 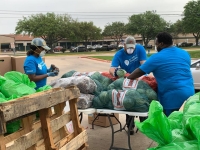