Katy homes expected to keep their appeal despite Harvey flooding 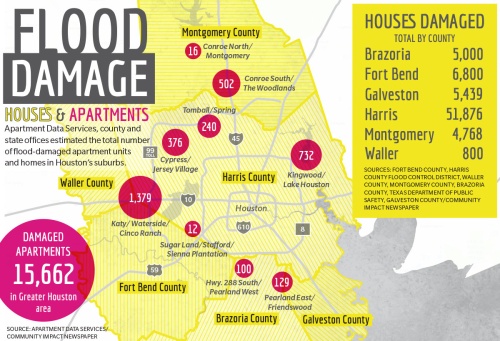 Floodwaters from Tropical Storm Harvey caused more damage to residential homes than any other property type in the Greater Houston area, experts said. Nearly 5 percent of homes in the area flooded, but only 0.1 percent of those were completely destroyed, according to the Texas Department of Public Safety.

However, despite an August decline in home sales before the storm, the region’s real estate market has showed gains in the two months since Harvey. The Houston Association of Realtors reported year-over-year single-family home sales in the Greater Houston area rose 4.2 percent in September and 7.5 percent in October.

By comparison, August sales were down 25.4 percent year over year, according to HAR.

“I don’t think anyone expected to see home sales in positive territory this soon after a natural disaster of Harvey’s magnitude, but the September report speaks volumes about the incredible resiliency of the Houston real estate market,” HAR Chairwoman Cindy Hamann said in a statement.

HAR’s September monthly report said rental activity also enjoyed its greatest boost of all time following the storm. Both HAR and Bruce McClenny, president of Apartment Data Services, said this was due to increased demand from residents displaced by flooding,  and McClenny anticipated it would persist while homes are repaired.

“It’s not going to be normal for a while,” he said.

The unprecedented rain event damaged between 80,000 and 100,000 structures in Harris County, 6,800 homes in Fort Bend County and 800 homes in Waller County, according to each locality. Many Katy-area homes flooded for the first time, particularly those behind the Barker Reservoir.

In addition, Katy had one of the highest rates of damaged apartments in the region, and occupancy rates increased as more families needed temporary housing. But despite their potential for a Harvey stigma, Katy-area Realtors Jennifer Wauhob and Stacy Jones said they were optimistic for Katy real estate’s long-term survival.

“I think the neighborhoods that had a lot going for them—those are going to be fine,” said Wauhob, of Better Homes and Gardens Gary Greene. “Not all flooded homes are created equal.”

Since the storm, Wauhob and Jones said people are still interested in moving to Katy, but one of the most common questions buyers have is whether a prospective home flooded. Clients are now more cognizant of the flood plain and both Realtors said they expect an increase in flood insurance policies.

“That is one of the first questions I get is, ‘Did [the home] flood?’” Wauhob said. “I think there’s going to be a stigma attached to those neighborhoods that flooded. For the next two to three years, that’s what buyers will be asking.”

Wauhob said she has told her clients selling homes that if their neighborhoods were desirable before Harvey, due to high-performing schools or amenities nearby, they will remain so. She predicted October would see upticks in year-over-year home sales.

“None of my [pre-Harvey] listings flooded, but I have since listed homes that flooded from people that decided … they’d really just rather sell it and be done with it,” she said. “The hardest pill to swallow for most sellers is how much it instantly diminished their value.”

“They just lost so much of their equity,” she said.

Homes that did not flood are expected to see an increase in value, said Mike Dishberger, owner of Sandcastle Homes and former president of the Greater Houston Builders Association.

But Jones, of Jones Team Realty, was skeptical. He said whether buyers are willing to pay inflated prices and whether lenders will approve such loans can act as  checks and balances to that effect.

Many residents in Jones’ service areas realized too late the downside of lacking flood insurance and had to navigate federal disaster assistance, he said.

“Unfortunately, everybody’s kind of learning things on the fly,” he said. “I think in terms of magnitude, this is definitely something that we haven’t come across before.”

Those with the cash to close on Katy area properties quickly and renovate them are expected to seek lower-priced flooded homes, Wauhob and Jones said. Some subdivisions, including Canyon Gate, were 100 percent affected, and now Realtors worry whether residents can come back to their old homes.

“I’m worried about that neighborhood coming back,” Wauhob said. “I would not be surprised at all if that ends up being heavily owned by investors.”

All 721 homes in the relatively less expensive subdivision behind the Barker Reservoir flooded. Many residents were renters and few had flood insurance, Wauhob said.

Jones said homeowners should guard agains scammers and those hoping to take advantage of desperate residents.

“You know, it’s not unlike any disaster,” he said. “There’s always a fringe out there in society that’s going to try to take advantage of a situation.”

Wauhob said she hopes that out of this disaster comes an increase in flood insurance policies. Affordable homes will be in even shorter supply than before the storm as well as leases, she said, listing Memorial Parkway and Cimarron as examples.

“Katy is getting less and less affordable, so for those families to stay in Katy, unfortunately, it’s hard for those people to find new homes,” she said.

Lawrence Dean, regional director of Metrostudy Houston, which provides real estate industry research, said housing prices have not significantly increased, and the biggest effect for homebuilding will be increased competition for materials—including drywall, plumbing and insulation—as homes are renovated, he said.

Real estate agents and analysts said it is tough to project how the real estate market will be affected long term. Meanwhile, occupancy rates and rents rose from August to September.

The Katy/Cinco Ranch/Waterside area had a 1.1-percent increase in occupancy rates from August to September, and an average monthly rent increase of $52, according to Apartment Data Services. Residents who could not find an apartment got creative.

“[It is] not the most unusual thing to see an RV in the driveway right now,” Jones said.

“A new segment of permanent renters could emerge out of the storm,” he said. “For example, older homeowners contemplating apartment living now have an additional motivation to shift from owning to renting.”

“The [damage from Harvey] doesn’t seem as devastating as we initially thought,” McClenny said. “We surveyed the damage [right after the storm], and we were able to get in contact with 98 percent of our members.”

Apartments up and down I-10 near the Barker and Addicks reservoirs near Katy were also a big source of flooded units, McClenny said of the data.

“Effectively, all those down units will come back fairly quickly,” he said. “There will be some kind of exodus from the single-family homeowners.”