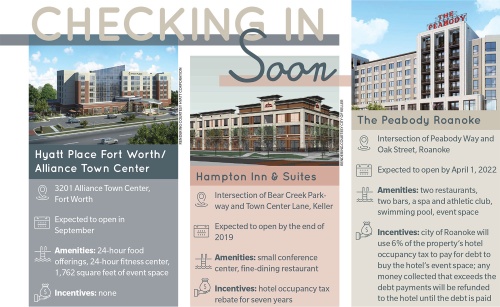 Business and leisure travelers are spurring more hotel development in Keller, Roanoke and northeast Fort Worth, bringing thousands of new rooms to the region.

From business-class to luxury lodgings, hotels are planned or under construction in all three areas. City officials hope new travelers will spark spending at retail, restaurants and other businesses.

The additional visitors could also bring new businesses to the cities.

“The more people you’re bringing in, even if it’s a tourist or someone staying at a hotel, it’s more likely to bring [a business] in to fill that additional need,” Keller Director of Administrative Services Aaron Rector said. “There’s that many more people to spend dollars, and you want to get in as many people as possible.”

More hotels will generate even more hotel occupancy taxes. These are the fees charged on the price of renting a hotel room. According to the Texas comptroller, cities can use those fees only to promote their local tourism and hotel industries.

City officials plan to use the taxes to fund events, transportation and visitor centers.

The city of Keller’s first hotel, a Hampton Inn & Suites, is under construction and expected to open by the end of the year.

The hotel will be located across Bear Creek Parkway from Keller Town Hall, next to Keller Town Center. It will include 110 rooms and a small conference center.

Once completed, the hotel is expected to be especially popular with guests attending events in the city, Keller officials said.

“It will improve the activities that we currently enjoy because people will be able to have overnight accommodations right here,” said Trina Zais, director of public services and economic development for the city of Keller.

Large corporations such as Charles Schwab, Fidelity Investments and Deloitte, which have hubs in nearby Westlake, have also expressed interest in renting blocks of rooms at the hotel for corporate travel, Zais added.

The city is offering to repay all hotel occupancy taxes generated by the Hampton Inn & Suites for seven years. The incentive is capped at $1.26 million over seven years, according to the city.

City officials are already working on ways the taxes could be spent once the incentive expires. One option could be a transportation system to move travelers around popular areas in the city, such as The Bowden and Old Town Keller.

Zais said the city is also working with developers who could open another hotel along North US 377. That lodging would likely be similar to the Hampton Inn & Suites in terms of size, scale and quality, Zais added.

Meanwhile, to the north, the city of Roanoke is preparing for construction of a luxury hotel.

The city and Peabody Hotels & Resorts announced in May final plans for The Peabody Roanoke. The hotel is set to begin construction by April 1, 2020, and be complete by April 1, 2022.

It will feature 300 rooms and 25,000 square feet of event space. Plans also call for restaurants, bars, a spa and athletic club, and an open rooftop with a swimming pool.

With the new hotel, the city of Roanoke is hoping to attract more leisure travelers to its dining and shopping options along Oak Street and to other popular spots, such as Hawaiian Falls water park, Roanoke City Manager Scott Campbell said.

The Peabody Roanoke will also be located about 10 miles from AllianceTexas, a development in northeast Fort Worth that is home to more than 500 companies.

“Having The Peabody and conference center is going to service those corporate partners because we just don’t have a lot of large conference space in this area,” said Vicki Rodriquez, director of fiscal and administrative services for the city of Roanoke.

The city will collect a 7% hotel occupancy tax from The Peabody once it opens. Of that revenue, 6% will be used to pay down debt the city issues to purchase the event space at the hotel. Any taxes that exceed the debt payment will be returned to The Peabody, according to an incentive awarded by the city.

Roanoke expects to finish paying off the debt within 30 years after the hotel is built. After that, it will no longer refund any of the hotel occupancy taxes to the property.

Roanoke currently collects hotel occupancy taxes from two hotels in the city. When The Peabody opens, Campbell estimates the tax will double.

Some of that money could be used to establish a visitors and convention bureau in the city, Campbell added.

Interest in building hotels in Roanoke is expected to continue. Plans have been approved for a SpringHill Suites that could be built at Roanoke Village, a mixed-use development planned at US 377 and Parish Lane.

Business travelers in Fort Worth

Northeast Fort Worth draws visitors based on nearby activity and leisure spots, such as Texas Motor Speedway and the Tanger Outlets.

However, business travelers make up most of the guests staying in the area’s hotels, said Robert Sturns, economic development director with the city of Fort Worth.

A Hyatt Place expected to open in September at 3201 Alliance Town Center in Fort Worth is aiming to accommodate those guests. The hotel will offer business-friendly amenities, such as 24-hour food offerings and 1,762 square feet of meeting space.

The AllianceTexas development in particular has driven a demand for hotel stays in the area.

“A lot of [the demand] is spurred by the fact that we’ve had ... so much business development in and around the [Fort Worth] Alliance Airport area in particular,” Sturns said.

The city does not break down its hotel occupancy tax revenue by region. However, Fort Worth is aiming to use the revenue to benefit the entire city, including the northeast area, Sturns said.

Some of the money goes toward paying off bonds for Dickies Arena and for future expansion of the city’s convention and visitors bureau.

“All of those things play into utilizing the hotel occupancy tax as a way to increase the attractiveness of Fort Worth as a community,” Sturns said.