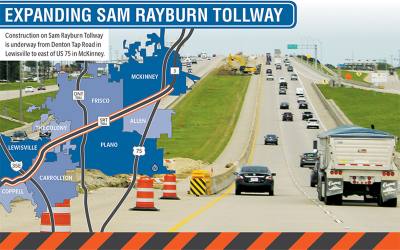 Construction on Sam Rayburn Tollway is underway from Denton Tap Road in Lewisville to east of US 75 in McKinney.

A Sam Rayburn Tollway widening project aims to improve regional mobility as the North Texas population is projected to exceed 11 million people in the coming decades.

The $200 million project will add a fourth lane in both directions of the tollway from Denton Tap Road in Lewisville to US 75 in McKinney.

Four Lewisville intersections along the SRT are affected by the construction as crews work to widen overpass bridges. The North Texas Tollway Authority owns and operates the SRT.

At least three more intersections west of I-35 are slated to undergo the same overpass widening construction this winter, according to NTTA’s construction timeline.

The SRT’s annual traffic counts are expected to increase by nearly 39 million transactions between 2015 and 2022, according to NTTA projections.

“[We] welcome the increased capacity on the tollway,” city of Lewisville spokesperson James Kunke said in an email. “It will be a benefit to commuters on the tollway and also to Lewisville businesses located along the tollway that will enjoy better customer access when the project is completed.”

The project’s anticipated completion in late 2021 will mark the end of construction along the tollway for the foreseeable future, NTTA spokesperson Michael Rey said.

Construction crews began working on the 26-mile project in January. They are adding the fourth lanes in either the median or on the outside edges of the tollway.

NTTA staff have since met with business groups along the tollway to keep them up to date on the status of the construction project.

Starting in the spring, crews began widening overpass bridges. Three Lewisville intersections east of I-35 are being affected by the overpass work. Those intersections are Josey Lane/Main Street, Standridge Drive/Castle Hills Drive, and Hebron Parkway.

Kunke said the city is not conducting any additional construction projects along the tollway.

“[There] are no ramps or bridges being significantly affected in Lewisville, so we’ve not been directly involved with NTTA on this project,” he said in the email.

However, he said the city has coordinated with the NTTA to ensure the correct names of streets and business complexes are used on the detour and construction signs.

Construction affecting the three Lewisville intersections east of I-35 will continue through the fall, according to NTTA. Crews will begin working on the bridges at Lake Vista Drive, MacArthur Boulevard and Denton Tap Road in the winter.

Michelle Raglon, Texas Department of Transportation spokesperson, said the project will not affect the interchange between I-35 and the SRT.

The added capacity will help with the area’s growth. North Central Texas Council of Governments projects the region’s population will increase from 7.4 million today to about 11.2 million in 2045. The NCTCOG works with cities, counties and transportation agencies to better coordinate regional planning.

Adding more than four lanes can have a degrading effect on traffic, said Kevin Feldt, an NCTCOG  program manager.

“Unlike most other projects, NTTA’s projects are: ‘You bring your own money, you get your own project’ kind of deal,” Feldt said. “We view the NTTA project as cost- and revenue-neutral, in that they have the money to construct, operate and maintain their projects.”

Cassidy Ritter contributed to this story.
SHARE THIS STORY

Flower Mound has had a 2.5% homestead exemption since 2018. The council's June 21 vote doubles the exemption to 5%.

Flower Mound to issue up to $10.25M in bonds to fund water, sewer system projects

The Flower Mound Town Council voted June 21 to issue up to $10.25 million in certificates of obligation bonds for water and sewer system projects.

The town purchased the land next to Helen & Leonard Johns Community Park and is considering whether to build a cultural arts center there.

The city of Lewisville will also be seeking a replacement for economic development director Jason Moore, who resigned.