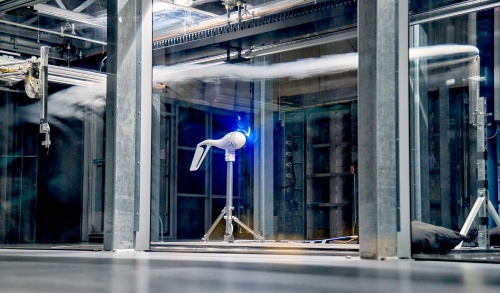 The BLAST wind tunnel at The University of Texas at Dallas creates wind speeds reaching between 80 and 115 mph.

A tunnel that mimics wind speeds up to 115 miles per hour was unveiled earlier this summer at the University of Texas at Dallas.

The Boundary Layer and Subsonic Tunnel, or BLAST, is shaped like an oblong doughnut and houses a 26,000 pound fan that creates wind conditions similar to those found in the atmosphere, according to information from the university. Its unique capabilities make it the only tunnel of its kind in the United States, said Mario A. Rotea, head of the university's Department of Mechanical Engineering, where the technology is housed.

The process to bring BLAST to UTD began in February 2014 when its aerodynamic design was created by Assistant Professor of Mechanical Engineering Giacomo Valerio Iungo. Construction began in 2016.

An official unveiling of BLAST was held July 9.

"Since then we tested an experimental wind turbine developed by a graduate student from the Technical University of Munich, with which we are developing an international collaboration," Rotea said.

UTD students will use BLAST to study the effects of wind exertion on objects, Rotea said.

“BLAST is just one of several investments made by UT Dallas in wind engineering,” University President Richard C. Benson said. “The time is right to leverage this existing investment to make Texas even a greater state for wind power in particular and wind engineering in general.”

The tunnel will also be open to use by the private sector, Rotea said. Car manufacturers could use BLAST to work on drag prevention and noise prevention; wind turbine builders could perform experiments on wind-farm blades; and airplane designers could study the effect of wind on aircrafts using scaled models.

While experiments would be conducted by UTD BLAST personnel, funding would be derived through the particular agency using the tunnel, Rotea said.

“Programs like UT Dallas wind engineering are needed now more than ever,” Jason Allen, chief operating officer at Leeward Renewable Energy, said in an interview with UTD. “I say this because I believe that the wind industry is at a pivotal time. We are experiencing unparalleled growth, but operating cost pressures are more challenging than ever.”

Rotea said the university is uniquely poised to offer affordable professional testing to regional, state and national agencies. Some corporations have already shown an interest in using BLAST, Rotea said, including companies in the defense industry that test antennas and helicopter components, architectural design firms, and wind energy owners and operators.

"A wind tunnel experiment has been proposed to a major funding agency for developing next generation smart blades for very large wind turbines," he said.

Accurate testing and observation is made possible by an anchored test object that sits in the middle of the tunnel. As air flows around it, a device in the tunnel takes a large volume of low-velocity air and reduces it to a high volume of high-velocity air without creating turbulence, the university said.

In two separate sections of the tunnel wind speeds reach between 80 and 115 mph, the speed of a Category 3 hurricane.

“There is nothing as thrilling as a real-world experiment,” Rotea said. “Actually seeing and experiencing everything happening in front of you is very exciting and necessary to test a theory or new concept.”