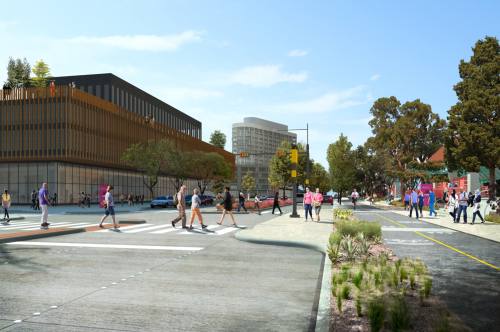 A rendering shows what a potential redesign of Greenville Avenue and the area surrounding the DART Arapaho Station could look like once the innovation district is complete.

City officials are requesting input from the public about mobility improvements made to Greenville Avenue.

The city has been testing the improvements since earlier this summer as part of a larger project to revitalize a 1,200-acre innovation district east of US 75. Additions include temporary bike lanes installed from Campbell Road to Jackson Street and a temporary crosswalk at the Dallas Area Rapid Transit light-rail station. The study is slated to continue until city staff reports the study's findings to council in early November.

Greenville is designed for three times the capacity it needs given current traffic counts, according to the city. Redesigning these types of streets could make it easier to get around the district without a car, the city added. The project is partially funded through an AARP Made To Move grant.

If the improvements are found to be effective, the installations could become permanent by July 2020, according to a city spokesperson.

Other event perks include free Kona Ice snow cones, partner giveaways and a DART bus bike loading demonstration. The public is encouraged to bring their bikes to test the improvements themselves.

For more information on the project, visit www.cor.net/greenville.