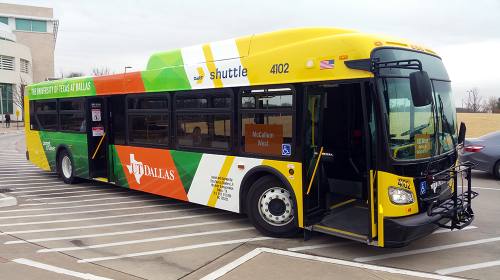 Three new Comet Cruisers will be added to the University of Texas at Dallas fleet.

Three additional buses will join the University of Texas at Dallas fleet after the Dallas Area Rapid Transit Board of Directors voted Aug. 27 to approve $1.5 million in funds for the purchase.

The 40-foot Comet Cruiser transports riders on Route 883 from campus to surrounding neighborhoods in Dallas and Richardson, a recent press release stated. It also stops at the CityLine/Bush station near the intersection of US 75 and the President George Bush Turnpike.

The Comet Cruisers, operational since 2008, are one of DART's top performers, according to an agency spokesperson. When school is in session, weekday ridership averages above 7,000, the spokesperson said. The fleet currently includes nine buses and will grow to 12 with this purchase, according to the release.