PHOTO GALLERY: Richardson City Council celebrates changing of the guard at May 13 meeting 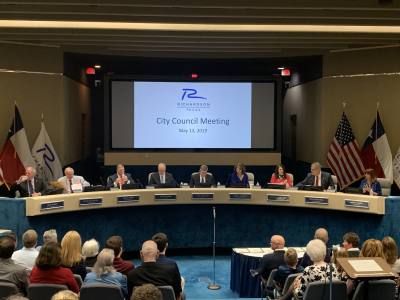 Former Richardson City Council members gathered for their final meeting together May 13.

There was an audible swell of bittersweet emotion May 13 as a crowded chamber watched city secretary Aimee Nemer affix new nameplates to the Richardson council dais.

Outgoing members Mabel Simpson and Marta Gomez Frey have served on council since 2015. Both announced plans to retire earlier this year.

During closing remarks, Simpson thanked her colleagues and city staff for allowing her the grace and time to ask questions. Simpson—a practicing attorney— was known by fellow council members as the "legal mind" of the group.

"When those tough questions were asked and discussed openly, I was never denied time for deeper dives," she said.

Bob Dubey, who ran a successful re-election campaign for Place 1, joked that Simpson's expansive vocabulary often left him searching for a dictionary by night's end.

"Mabel, I appreciate you raising my SAT standards with all the words and wisdom that you provide and the in-depth questions you've asked," he said. "I usually go home after every council meeting and look those words up, so I appreciate it."

In her tearful goodbye, Frey talked about the lifelong dedication to community service that was instilled in her as a child. As director of the Collin Small Business Development Council, Frey spent her council tenure advocating for the city's small business community. She is relinquishing her council seat but will continue to contribute to the city in other ways, she said.

"Richardson already has a strong foundation to build a successful, prosperous and vibrant future—this new council only strengthen that," Frey said of incoming members.

Oaths of office were then administered to all returning and new council members, including Kyle Kepner and Kenneth Hutchenrider, who were elected to replace Simpson and Frey, respectively.

Once they had taken their seats on the dais, all council members made introductory remarks, in which they thanked their families, fellow candidates and council members for support over the course of the campaign.

One additional new council member is yet to be named. The seat vacated by Council Member Scott Dunn will be filled by either Janet DePuy or Dan Barrios, the top two votegetters in the Place 3 race. A runoff election is scheduled for June 8.

Canvassing of the runoff results as well as the naming of the mayor pro tem will take place June 15.
SHARE THIS STORY

The facility is expected to have three to five retail spots that can be leased out for separate businesses underneath the self-storage units.

The Richardson ISD board of trustees approved a guaranteed maximum price of just over $6 million for the first phase of a planned expansion and renovation project at JJ Pearce High School during its June 7 meeting.