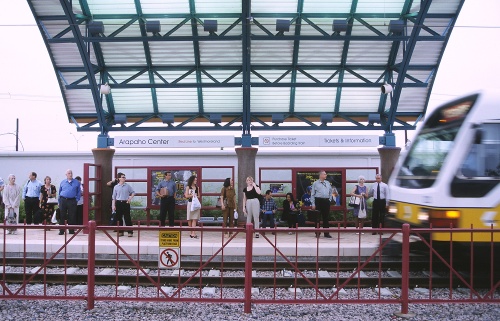 The Cotton Belt will add one DART rail station to the University of Texas at Dallas and will stop at the CityLine/Bush station on the Red Line.

Richardson city officials have not played down their excitement for a future east-west-running transit line—they said they envision greater mobility for commuters and a boon for future development in the President George Bush Turnpike corridor.

The 26-mile Cotton Belt line will offer rail service stretching from Shiloh Road in Plano to the Dallas/Fort Worth International Airport.

With two new Richardson rail stations on the future Cotton Belt line expected to begin servicing passengers in 2022, city officials have coordinated with Dallas Area Rapid Transit in advance to ensure their priorities for the line are met.

The DART board of directors green-lighted some of those priorities outlined in an interlocal agreement at its Aug. 14 meeting—sealing the deal for Richardson’s vision for the CityLine development and future development at the University of Texas at Dallas.

“Relative to commuting … we certainly believe [the Cotton Belt] will enhance [employment] and these other entertainment opportunities that come here, and it builds on this access rationale,” Richardson City Manager Dan Johnson said.

The city of Richardson is not the only entity that stands to benefit from the Cotton Belt. University of Texas at Dallas officials coordinated nearly a decade in advance of their station coming online to secure developable land in the areas immediately surrounding their future station.

In its interlocal agreement with DART the city of Richardson outlined some key priorities for its Cotton Belt stations, including aesthetic changes to a bridge that will pass over US 75 and the deviation of the line from the historic Cotton Belt railroad track to connect with the existing CityLine/Bush station on DART’s red line.

Johnson says perhaps the most exciting prospect of the Cotton Belt, among having direct rail access to the Dallas/Fort Worth International Airport, will be the one-seat ride option from Plano to Downtown Fort Worth.

That connectivity to Fort Worth and the airport, combined with the output of future employees graduating from UTD, is a bargaining chip that Bill Sproull, the president and CEO of the Richardson Economic Development Partnership, says gives the city   a competitive edge in attracting new
employers.

The city will also use revenue from two of its existing tax increment finance zones to reimburse DART for costs related to construction of the Cotton Belt and its stations in Richardson, according to the city’s interlocal agreement with DART. Tax increment finance zones, or TIFs, are an economic tool cities may use to generate money based on projected property tax revenue growth. Roughly 12 percent of the yearly property tax revenue growth from those TIF zones will be used to reimburse DART.

Barring changes to DART’s financing timeline, reimbursement by the city through the TIFs is expected to begin in tax year 2019 and expire in 2036.

But with multiple DART member cities pushing their own interests, the path to construction of the Cotton Belt has seen its share of political roadblocks.

The DART board of directors voted Aug. 28 to amend the Cotton Belt plan to delete two stations planned for Coit Road and Preston Road.

The Plano City Council passed a resolution in March that voiced concern over the city of Dallas’ request to remove the Coit Road station from the service plan.

City of Richardson spokesperson Greg Sowell said the city did not have a position on the location of the now-deleted Preston and Coit Road stations.

Deputy City Manager Cliff Miller said DART staff has quelled some of the board members’ previous concerns regarding the financial feasibility of simultaneously constructing the Cotton Belt line and a downtown Dallas subway project. Board members signaled their continued support after approving the resubmittal of a federal funding application for construction of both projects on Aug. 14. The board approved a similar application in September 2017 but had to reapply after not accessing funds within a year’s time, agency spokesperson Morgan Lyons confirmed.

With the amended Cotton Belt service plan in hand, the city of Richardson is not the only stakeholder eagerly awaiting the rail’s impending construction.

The prospect of Cotton Belt service at UTD led administrators to partner with the city of Richardson and DART in 2009 to create a transit-oriented development, or TOD, near the location of the future station, said Calvin Jamison, vice president of facilities and economic development.

Prior to creation of the TOD the UTD executed a land swap with Dallas International School that added 60 developable acres north of the university.

“We anticipated that having that continuous acreage adjacent to the Cotton Belt would have a positive economic impact on the university and the overall community,” he said.

Creating the TOD was envisioned as a “win-win” for all parties involved, Jamison said. By developing the area around the proposed station, the university would be seen as more than just a single-purpose destination and instead a “must-see” stop along the rail line.

In 2016, UTD opened mixed-use development Northside, a byproduct of the TOD and the university’s intent to transform the area around the future Cotton Belt station into a live-work-play destination.

“In most cases the rail station comes first and development follows,” Jamison said. “UTD grows so fast we needed that amenity.”

Since 2007 UTD has doubled its student population, Jamison said, with 28,000 students currently enrolled. Two phases of Northside are now open, adding 323 dwelling units and 26,600 square feet of retail. Plans for a third phase are in the works, Jamison said.

The Cotton Belt will not only supplement multimodal access to UTD from across the Metroplex—the university saw 1.5 million riders on its DART bus service in 2017—but will also encourage an uptick in nearby commercial activity, Jamison said.

“We are strategically located and perfect for any entity who wants to grow their business and have easy access to the next generation of brain trust—our students,” he said.
SHARE THIS STORY