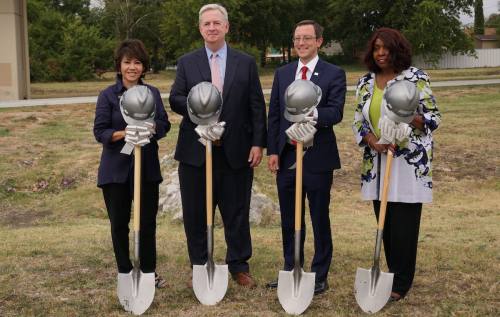 DART President Gary Thomas remarked, “Oftentimes, people will say, ‘Gary, you’ve got the longest light-rail system in North America, … but it all kind of goes in and out of downtown Dallas. When are you going to get that … east-west route done?’ Here it is. We’re ready.”

The Silver Line’s projected opening in December 2022 will mark the first time some DART-participating cities have ever had access to the transit agency’s rail network.

“The benefit this line will provide to Plano residents is enormous,” Plano Council Member Anthony Ricciardelli said. "Not only will the service be a fast an efficient way to get to and from the DFW airport, but it will also allow for easy access to major employment, education and entertainment centers not only in our city, but also throughout the region."

While the Silver Line will end at the DFW airport, it will link up with Trinity Metro’s TEXRail and continue service into downtown Fort Worth. That will provide passengers with 60 miles of transit spanning from Fort Worth to Plano, DART President Gary Thomas said.

Plano has been a DART-participating city since the agency’s inception in the 1980s. The construction of the Silver Line will include the addition of two new stations in Plano: one at Shiloh Road and another at 12th Street.

“Plano has been transformed from a quiet bedroom community into a diverse city known across the United States for its talented workforce, vibrant job market and quality of life,” said Paul Wageman, one of Plano’s representatives on the DART board of directors. "Today’s groundbreaking marks the addition to another element to the city’s mobility infrastructure and its economy."

The Silver Line had previously been called the Cotton Belt Line due to its location along the historic Cotton Belt railroad corridor.

The line will pass through seven cities, including Grapevine, Coppell, Dallas, Carrollton, Addison, Richardson and Plano.

Passengers will be serviced by diesel trains contracted to be built by manufacturer Stadler U.S. Each train will seat 230 passengers and measure 318 feet long, according to DART. The diesel motors used in the trains meet some of the strictest Environmental Protection Agency emissions regulations for non-road engines and vehicles.

The line’s schedule will provide service at 30-minute intervals during peak traffic hours. Off-peak hours will have 60-minute service intervals.

See the map below for a complete route of the Silver Line: