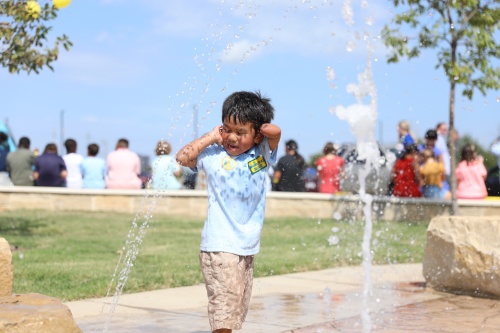 Tyler Nukor, age 3, reacts to one of the spray features of the water stream at the opening of Liberty Playground.

The water stream for Liberty Playground's splash pad has been turned off until safety concerns can be resolved by the city of Plano Parks and Recreation Department.

According to a press release from the city of Plano on Oct. 2, the surface becomes slippery when water is turned on. The city is now working with the designer of the facility to change the surface.

"We apologize for any inconvenience to those families who were enjoying the water feature or looking forward to playing on it," the statement said.

The playground was built as an all-inclusive space for children with and without disabilities through a partnership between Liberty Mutual Insurance and the city of Plano. Both entities gave $1 million to fund the development of the playground.
SHARE THIS STORY