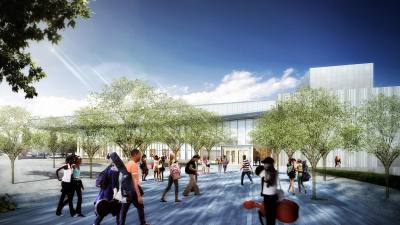 The facility will include a 1,500-seat performance hall, rehearsal space, black box theater and art gallery, according to a joint news release from Perkins+Will and Bora Architects.

“This facility serves a vision larger than the sum of its parts,” principal at Bora Stephen Weeks said in the news release. “Four state-of-the-art venues will showcase students’ hard work and talent. Our design is a celebration of these young learners, and reflects the district’s commitment to the transformative power of arts education that we find optimistic and inspiring. We want the building to be a bright, beautiful invitation to the whole community.”

The arts center will be located at the southeast quadrant of Park Boulevard and Alma Drive and is expected to be complete in August of 2020, according to the release.

“We are proud to share the collaborative design of this dynamic building supporting the broad spectrum of talented Plano ISD fine arts students,” regional education leader for Perkins+Will Vandana Nayak said in the news release. “A blend of elegance and functionality, the Fine Arts Center was designed to inspire creativity while cultivating an effective educational environment. It will be a crown jewel for the school district and the community.”

Planning for the facility began in February, as previously reported by Community Impact Newspaper. The need for the facility was originally discussed in December 2015 at public hearing, and the acquisition of the land was approved in October 2016.
SHARE THIS STORY