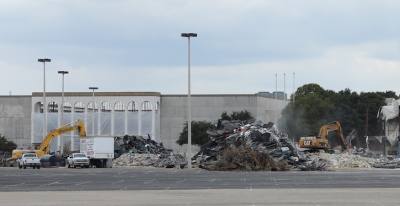 The Collin Creek Mall mural at Macy's appeared to be partially removed as of Sept. 30.

The developers of Collin Creek Mall have removed the historic mural at the entrance of Macy’s after discovering asbestos on the wall surface on which the tiles were laid.

“Last weekend, it was determined that asbestos mitigation is necessary on the wall surfaces to which the tiles had been adhered 40 years ago,” said Sean Terry, vice president of Centurion American, in an Oct. 5 statement. “The mitigation process has already begun, and because of the materials and methods used to create the murals, retaining them will not be possible,” Terry said.

The developers remain committed to paying tribute to the past of Collin Creek Mall, the statement said.

“Our architectural partners have located and will plan to secure matching tiles from the original purveyor so we can incorporate some of the nostalgic elements from the original structure as a design component within the future Collin Creek,” Terry said in a statement.

This decision to remove the mural came weeks after Centurian American Development announced their plans to preserve the mural.

Demolition at Collin Creek Mall began the weekend of Sept. 14. The $1 billion mixed-use development is being built in stages, with the first and largest phase set to include demolition of the mall's first anchor stores.
SHARE THIS STORY