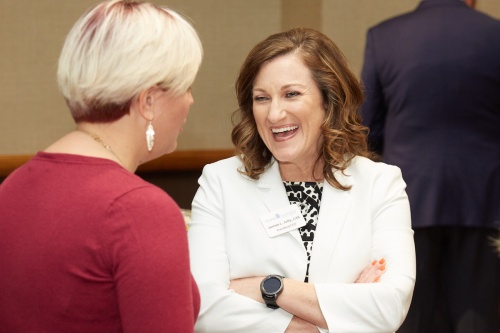 The Plano Chamber of Commerce announced May 21 Jamee Jolly, the chamber president, is stepping down to accept a new position in the Plano community. Jamee Jolly is stepping down from her position as president and CEO of the Plano Chamber of Commerce.

Jolly has accepted "another position in the Plano community," the chamber's executive committee told members May 21. That new position was expected to be announced later that evening but the timing of the announcement was not final, Jolly said.

Jolly has led the chamber since 2010. During her tenure, the city has undergone substantial changes that included the opening of large corporate office buildings for Toyota Motor North America, Liberty Mutual and JPMorgan Chase & Co., among others.

"It has been an honor to be on the team at the Plano Chamber during a transformational time for our local business community,” Jolly said in the news release. "I have had the pleasure of working in partnership with nine different Board Chairs, three city managers, four superintendents, and numerous business professionals in my role as president and CEO.

"I am most proud of the team members that worked alongside of me to deliver the best customer experience for our members and to create an award-winning organization that delivers on the mission."

The Plano Chamber received the 2018 Chamber of the Year Award last July from the Association of Chamber of Commerce Executives. In order to receive the recognition, the chamber underwent an in-person interview with a panel of leading chamber professionals from across the country.

"Jamee Jolly has been a superb leader who guided the Plano Chamber of Commerce on a path to excellence,” Plano chamber chair LaMonte Thomas said in the news release. "The entire board thanks her for her many contributions and wishes her well," said LaMonte Thomas, chair of the Plano Chamber's board, and president of Cigna's North Texas and Oklahoma markets.

Jolly will continue serving as president and CEO through mid-June, according to the news release. The chamber board will then appoint an interim president until they identify a permanent replacement.

Editor's note: This story has been updated to reflect additional comments from Jolly.