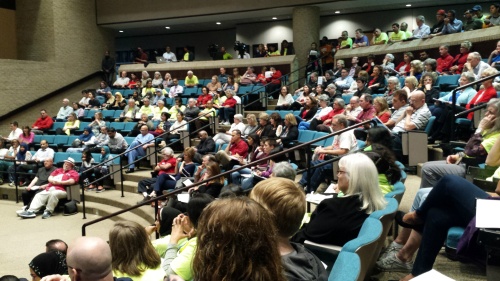 A public hearing on April 23 offered Plano City Council member Tom Harrison an opportunity to defend himself in advance of a recall election scheduled for Nov. 6, 2018.

Laying out his case to remain on the Plano City Council in advance of a Nov. 6 recall election, Tom Harrison on Monday denied having knowingly posted Facebook links to articles making politicized statements about black fatherhood and falsely asserting that all present-day slaveowners are Muslim.

Harrison also said that when he shared a Facebook video on Feb. 13 that called for a ban of Islam in American schools—the post that first sparked the controversy surrounding the embattled council member—he thought it was simply an image bearing the same message, not a video.

“Rest assured I intend to stay the course and resist resignation of my duly elected position on the Plano City Council,” Harrison said.

Harrison’s statements on Monday amounted to his most detailed public defense of his social media actions, some of which date back to Nov. 5, 2016. He designated Cindy Baccus, a social media and marketing consultant, to present an argument that some of his posts from 2016 could have been shared mistakenly by scrolling from the Facebook mobile site.

And while a group of dozens of residents reiterated their support for Harrison in the meeting on Monday night, the arguments he and his representatives made failed to satisfy others who condemned his Facebook activity and called on him to resign.

The other council members did not comment Monday on the Nov. 6 recall election, citing statutes that prevent officials from using public resources like Plano's live-streaming web video of the meeting to lobby for or against a ballot measure.

But all seven of Harrison’s council colleagues had previously voted on Feb. 18 to admonish him for the statements made on his personal Facebook page, which appeared to be made private or deleted later that day. Harrison’s fellow council members at the time each suggested he should resign or called for his resignation outright.

The city attorney’s office brought these posts and others to the council’s attention within days of Harrison sharing a Facebook video on Feb. 13 from another account that called for President Donald Trump to “ban Islam in American schools.” The video, first posted by the group "Joined Hands Across America for Trump," depicted students wearing hijabs at their classroom desks. The "ban Islam" text was visible throughout the video and in the still-image preview that appeared on Facebook news feeds.