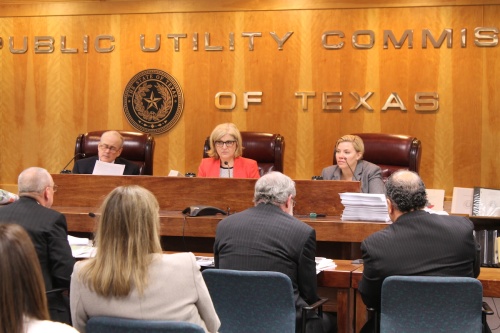 The Public Utility Commission of Texas once again delayed a decision on whether to bury power lines in West Frisco to allow the city and Brazos Electric time to file more evidence in the case.

The commission is now scheduled to make a decision during its May 19 meeting.

During the April 14 open meeting, the commission discussed with city and Brazos officials the possibility of changing one section of the proposed underground route into overhead lines. The proposed section extends along Main Street mostly in Little Elm, but a portion also extends into Frisco. No one at the meeting objected to the proposed change in the power lines route.

The commission also discussed other sections along the proposed underground route to change into overhead lines. However, City Manager George Purefoy said those sections, which are farther into Frisco, would pose a safety concern to drivers on Main Street if the lines were built overhead and would inhibit the city from making the lanes closer together during road widening.

The city has plans to widen the west portion of Main Street to six lanes, which Frisco Mayor Maher Maso said has been in the city’s master plan since 1984. City officials have argued that because the street would be widened from the median, the median would be too narrow to hold overhead lines with the proper safety rails, creating a hazard for drivers.

PUCT Chairwoman Donna Nelson said the safety issue with overhead power lines was the most compelling argument for burying the power lines. However, she said the PUCT’s decision still was not going to be easy because it is setting precedence.

“My concern is that we don’t want to be undergrounding every line that comes in front of us,” Nelson said.

The proposed power lines route stretches along Main Street in Frisco and partially into Little Elm. The city and Brazos entered into a stipulation agreement with PUCT staff and other parties earlier this year that calls for a majority of the proposed route to be underground. In the current agreement, the power lines route would be underground in Frisco and overhead in Little Elm. The city of Frisco has agreed to contribute more than $12 million toward the cost of burying the lines.