The Texas Department of Transportation held a presentation Oct. 21 to consider two possible alignments for an extension to Spur 399 in McKinney. (Courtesy Adobe Stock)

The extension project stems from a larger project for US 380. According to TxDOT’s presentation, a feasibility study for Collin County was conducted from 2017 to 2020 to better meet the traffic needs of US 380. A recommended alignment for US 380 was chosen, and the project was divided into five independent project segments. One of these proposed segments is an extension to Spur 399 from US 75 to US 380. The goal of developing these segments is to address the growth occurring in the area and draw traffic away from US 380, the presentation stated.

The two options for this extension being considered are within the southeastern portion of McKinney. The project would stretch the existing Spur 399 roadway and create a six- to eight-lane freeway on a new location alignment. The goal of creating this extension is to improve traffic heading north and south and overall connectivity. The project also needs to provide capacity to support the growth occurring in the region, the presentation stated. 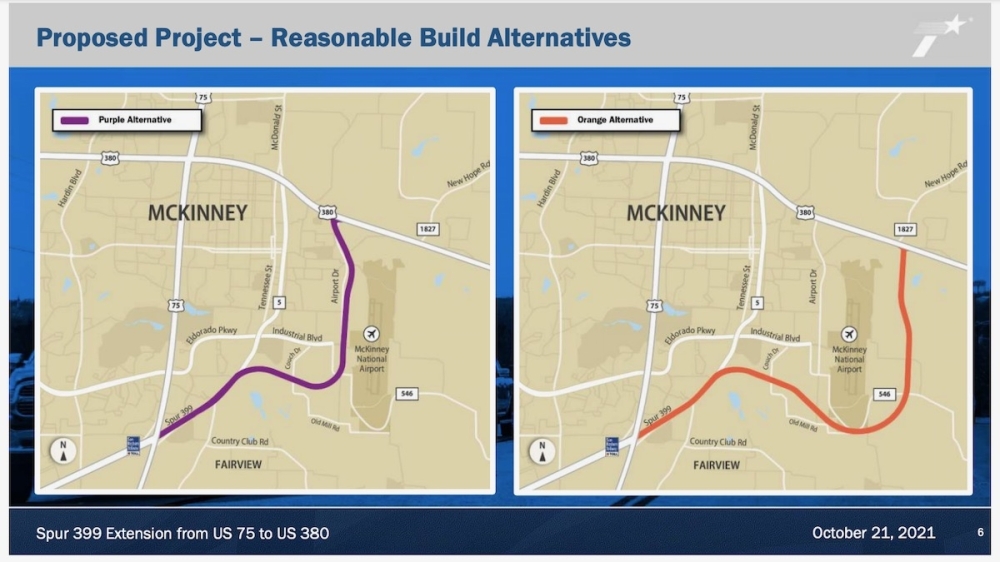 TxDOT also pointed out that the purple route would affect the Amazon Delivery Station in this area, while the orange route would displace the McKinney Airport Center. The Amazon facility is newly in operation, and Amazon representatives noted its location was chosen for its access to major roadways. It is possible that if it were displaced, it would not relocate inside McKinney, the presentation stated. The McKinney Airport Center, on the other hand, comprises two 230,000 square-foot buildings that house office and warehouse spaces. The building features multiple suites and hundreds of parking spaces, the presentation noted.

During the feasibility study period, McKinney officials voiced support for an eastward extension of Spur 399 as a freeway and strongly opposed a freeway west of the airport. The TxDOT presentation stated project managers will continue to consider comments provided by local governments, agencies, stakeholders and the public.

TxDOT is seeking public feedback on these two route options through Nov. 5. Comments can be submitted online at www.keepitmovingdallas.com/spur399publicmeeting. Questions about the project can be sent to Project Manager Stephen Endres at [email protected]

TxDOT is working on identifying a preferred route option for the Spur 399 extension and developing a schematic design. The preferred route will be available at a public hearing expected next summer, the presentation stated. Once all funding is identified and the final design phase is completed, construction is expected to last three to four years, per the presentation.