The McKinney National Airport terminal is expected to be completed by July 2021. (Rendering courtesy CaCo Architecture)

Construction has resumed on a nearly $7 million terminal at McKinney National Airport following a yearlong delay.

In 2018, crews broke ground on a new terminal and hangar as part of what is now a $16.8 million expansion project. The effort was the first public-private partnership at the city-owned airport, which provides general aviation services, such as corporate flights, flight training and medical air transport.

The hangar finished on time in 2019. But shortly after that, Western LLC—the original development firm leading the project—filed for bankruptcy, stalling construction of the terminal for about a year.

“They left a partially completed project out there,” McKinney Assistant City Manager Barry Shelton said. “We decided that we would just complete the project ourselves.”

In 2013, McKinney purchased the airport’s fixed-base operator, or FBO, which includes the terminal that provides services, including fuel and hangar rentals, and buildings located at the site. The airport, which originally opened in 1979, serves corporate and private planes, and according to the airport’s website, it supports all civilian flights except for scheduled commercial passenger airlines. A 2017 study from the Texas Department of Transportation estimated the economic impact of the airport to be about $213 million.

The new 17,000-square-foot FBO terminal will be located east of Hwy. 5 off of Industrial Boulevard. It will include a flight planning room, a pilot lounge, a media room, two conference rooms, on-site car rentals and a new parking lot.

The project provides an amenity that encourages development and growth not only in McKinney, but in the region, Shelton said.

“When you have someone ... flying through McKinney, that front door will be the new terminal,” he said. “It’s going to offer a great image as people arrive in McKinney. We think that helps with business retention and expansion, but also with recruitment of business to the region.”

The new air terminal will serve as a gateway to the city and will help the overall visual appearance of the airport to match the level of service provided, McKinney National Airport Director Ken Carley said.

Leasing the office space allows the airport to generate more revenue to offset the cost of operations, Shelton said. Since 2017, the airport has been weaned off the city’s coffers each year. Fiscal year 2019-20 was the first in which the airport took no monies from the city’s general fund.

Instead, the airport has been generating enough revenue not only to cover its own expenses but also to boost the city’s bottom line. The city is able to collect taxes on aircraft that are based in McKinney the same way it collects taxes on homes or businesses in McKinney.

“Not only do we not take any general fund support from the city in terms of finances, we’re completely self-sufficient. But we’re generating $2.9 million in tax revenue for the city, the school district, the county and Collin College,” Carley said.

The airport does not usually rank high on the average citizen’s priority list, McKinney Mayor George Fuller said. That is likely because they are unaware that the airport helps lower property taxes without using many city services, such as roads, police and fire, he said in a September interview.

McKinney National Airport serves to relieve traffic at major airports, such as the Dallas Fort Worth International Airport, said Ernest Huffman, program manager for aviation planning and education at the North Central Texas Council of Governments.

The airport continues to see demand in the aviation industry, Huffman said.

“It’s primarily due to the corporate headquarters that are located in that area,” he said. “Every time a business that I know of is thinking about relocating here, they are always asking about McKinney.”

The original public-private partnership for the terminal and the new 40,000-square-foot hangar split the costs among the entities involved. The $16 million came from multiple sources, including the city’s airport budget, which contributed $2 million; the McKinney Economic Development Corp., $4 million; the McKinney Community Development Corp., $4 million; and Western LLC, $6 million.

As part of the deal, Western LLC was to be reimbursed by the city in rent payments for its $6 million with future funds collected from terminal revenue, including hangar rentals, officials said. Once paid off, the hangar and terminal would belong to the airport.

The terminal was about 50% completed when Western LLC told the city it needed more money, Shelton said. The city, however, insisted on sticking to the deal, he said.

Western LLC defaulted on the agreement and filed for bankruptcy earlier this year, which left the project unfinished. Rather than trying to find another private partner, the city decided to complete the project itself and own it outright.

“[The structure] has been sitting there for probably somewhere near a year now as we regrouped and decided how we were going to finish the project,” Shelton said.

In November, the city contracted with McRight-Smith Construction under an emergency procurement process to finish the project for an amount not to exceed $6.8 million, Carley said. The company was the runner-up under the original bidding process used to select Western LLC.

“Our goal is to deliver ... a beautiful facility they’re happy in for a long time,” McRight-Smith President Andrew Smith said.

The $10 million the city invested into the project has primarily funded the construction and completion of the hangar and the parking facilities, officials said. While the city has not lost money as a result of the delay, additional funds were needed to correct the incomplete terminal project and the vacated construction site.

The city plans to use bond funds to complete the terminal. The airport’s operating revenue will pay the debt. The original architectural firm for the terminal has been retained, so the project should follow its intended vision, Shelton said.

“We’re essentially back to where we started,” he said.

Construction on the terminal resumed in November and is expected to be completed in July 2021, Smith said. The company is also currently constructing 10 more hangars that are on a ground lease at the north end of the airport. Each hangar will provide an additional 4,000 square feet of space, but all of them have already been sold by the developer, Carley said. 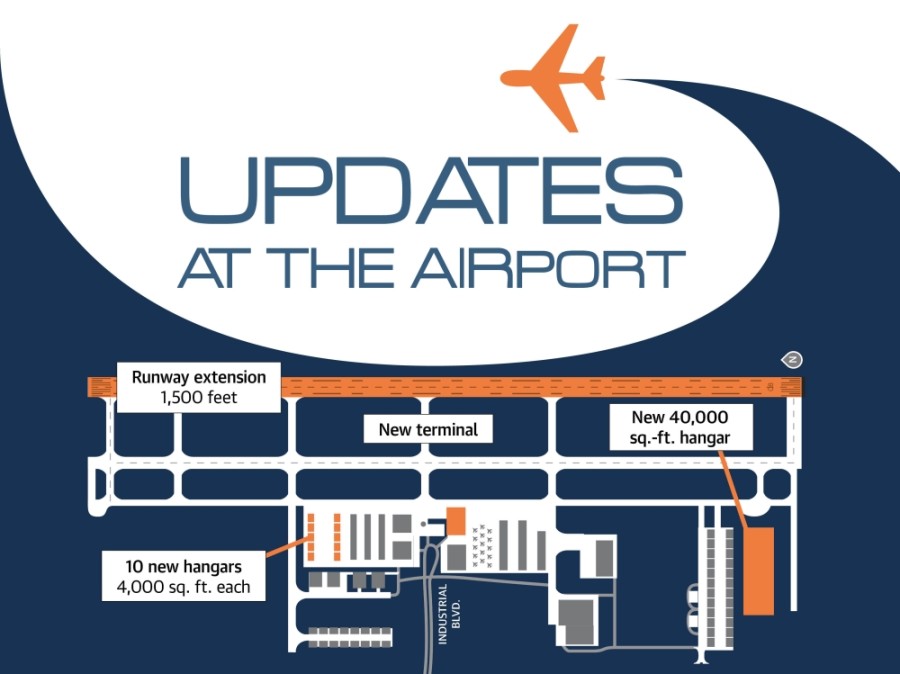 The airport is also working on expanding its runway. This project is in the design and permitting phase but will add 1,500 more feet of length to the runway when complete, Carley said.

A longer runway will allow airport operators with heavy loads to fly on longer international trips without having to account for an extra fuel stop, he said.

“It’ll enhance us in that role as a reliever, in the sense that we can serve people that may not be coming here today that otherwise would,” Carley said.

While the industry of passenger air travel has been affected by the coronavirus pandemic, Carley said the business model at the McKinney National Airport has allowed the facility to continue to grow. The airport saw only a 10% dip in operations and a 20% decline in fuel sales. It ended FY 2019-20 with about $600,000 in revenue, Carley said.

“That really speaks loudly to the resilience of the industry and the business model that we have here—that even in a time like this, we’re still able to close out the last fiscal year in the black, and that’s with no general funds from the city,” Carley said. “We’re standing on our own.”