Construction on the Sam Rayburn Tollway and its intersections is expected to ramp up in the coming months as part of a $200 million expansion.

The North Texas Tollway Authority’s Sam Rayburn Tollway widening project began in January 2019 and will add a fourth lane in both directions from Denton Tap Road in Coppell to US 75 in McKinney. The project also calls for ramp improvements in Frisco between the Dallas North Tollway and Preston Road.

The Sam Rayburn Tollway widening project aims to improve regional mobility, as the North Texas population is projected to exceed 11 million people in the coming decades.

The entire 26-mile corridor is under construction at once so crews can get ahead on project progress, NTTA spokesperson Michael Rey said.

“The work is being done in the center median for safety reasons and to lessen the impact to drivers,” Rey said. 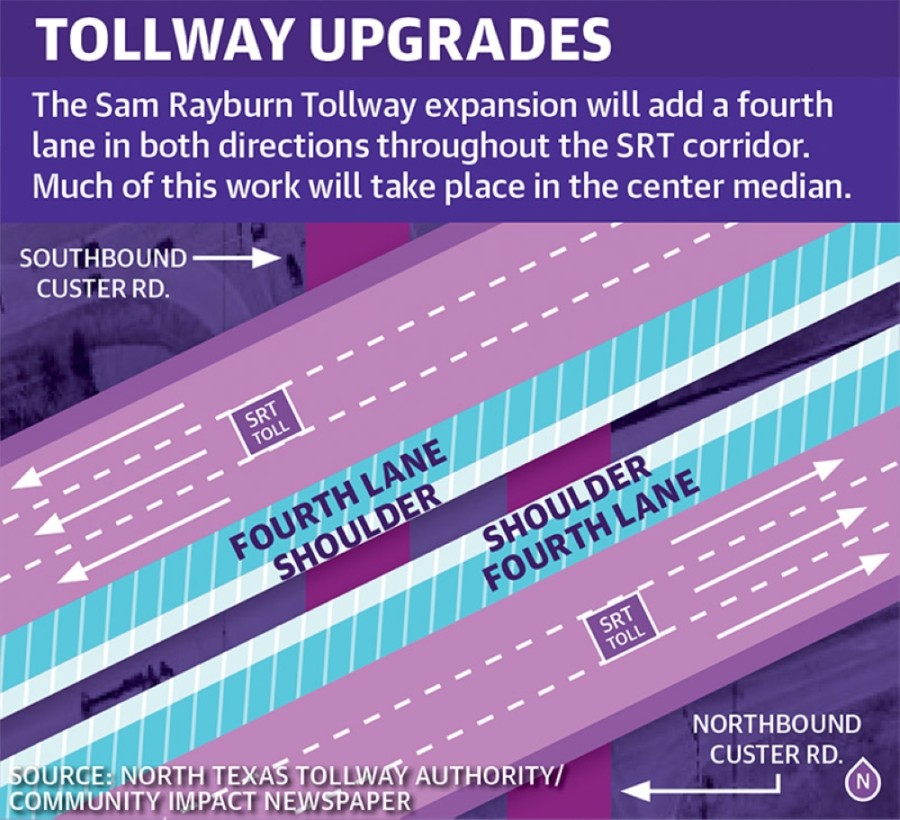 Rey said decreased traffic on the tollway due to the COVID-19 pandemic allowed construction crews to begin work sooner and extend work later into the day.

“From March through May, NTTA traffic engineers extended the times of permissible lane and ramp closures on the [Dallas North Tollway], [the President George Bush Turnpike] and [the Sam Rayburn Tollway] to advance key construction and maintenance projects while traffic counts were low,” Rey said in his email. “Those extended lane closure hours were discontinued in June.”

That toll revenue is used to finance road improvements. Toll road projects do not receive federal funding, said Kevin Feldt, program manager for the North Central Texas Council of Governments, which oversees mobility in the region. Rey said funding for the SRT expansion will not be affected by revenue dips, and the project is still on track to be completed in December 2021.

From January to April, crews excavated in the tollway’s median, began asphalt and concrete paving, worked on intersection bridges and continued building a new ramp on Parkwood Boulevard in Frisco, per the report.

Part of the SRT expansion involves adding lanes to existing bridges at several intersections. The process for this includes demolitions and adding foundation, columns, beams and a bridge deck, Rey said.

As businesses and residents return to work and traffic increases, Rey said NTTA’s project and traffic engineers will evaluate tollway and intersection closures on a weekly basis. 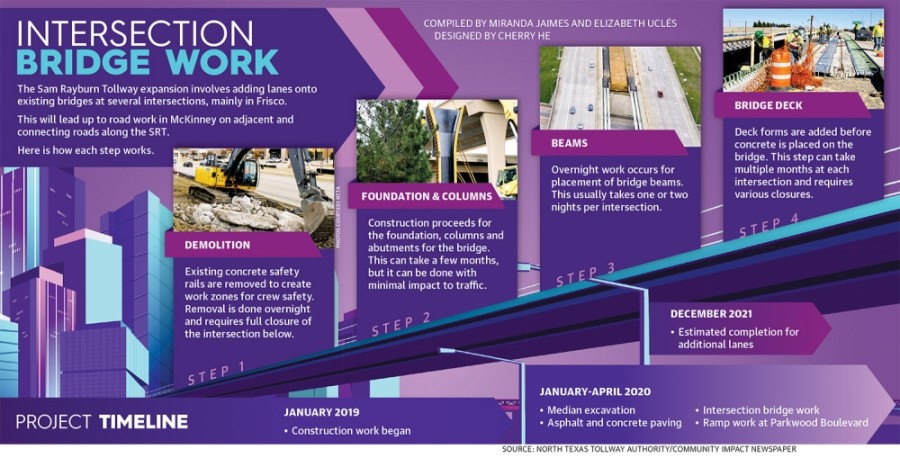 Work is continuing on the 26-mile tollway, according to a spring 2020 progress report by NTTA.

“In McKinney and Allen, concrete paving for the additional east- and westbound lanes is complete,” Rey said in an email.

The majority of the intersection work at present is between Parkwood Boulevard and Coit Road in Frisco, where crews are preparing for beam placement, placing deck forms and placing concrete at various intersections, Rey said.

In McKinney, crews are expected to continue the installation of landscaping and erosion control; replacing existing striping, starting at the entrance and exit ramps; and installing overhead sign structure. This work is expected to continue until the end of 2021, Rey said.

The tollway project is expected to provide some relief to heavily trafficked areas along the project corridor, Feldt said.

Traffic increases as the population goes up, and the McKinney population is expected to break 200,000 people this year, Feldt said.

There are no plans to expand the tollway beyond four lanes, officials said. Feldt said adding more than four lanes on a highway can have a negative effect on traffic.

“We don’t want to get bigger than that because the problem we run into is there’s too much ... merging and weaving, with people changing lanes and too much going on,” Feldt said.

Transportation planners should explore more solutions to improving mobility other than expanding highways, Feldt said. Cities should also keep an eye on the future and try to get ahead of transportation needs before they happen.

“It’s much better to be proactive than reactive,” Feldt said.

In addition to work on the Sam Rayburn Tollway, the Texas Department of Transportation and the city of McKinney have future plans to improve traffic capacity along Hwy. 5. This project will add additional lanes to reduce congestion so drivers will not have to merge from a four-lane highway to a one- or two-lane roadway.

Proposed improvements on Hwy. 5 include widening the existing two-lane road to a four-lane divided highway from FM 1378 to Spur 399 and from Power House Street to SH 121.

TxDOT recently held a virtual public meeting to receive feedback on the project; the link for that information is www.keepitmovingdallas.com/sh5.

While there are currently no major local transportation improvements planned for McKinney roadways directly at their connections to the Sam Rayburn Tollway, Nicholas Ataie, capital improvements manager for the city of McKinney•, said the city does have some projects in the works to improve local roadways that connect to or run adjacent to the tollway.

One of these projects involves adding a travel lane in each direction of Stacy Road between Custer and Ridge Road in McKinney, he said. Construction is expected to start in the fall.

“There is going to be a bridge structure, and Collin McKinney will actually be able to take you all the way to the McKinney ISD Stadium,” Ataie said.

This project is still in the design phase, with construction expected to start in early 2021.

“That area is kind of ripe for development, and to have that connection makes sense,” Ataie said.

Many of the developments in the area depend on the tollway to spur more growth and provide access to businesses, Feldt said.

One such sign of growth is The Farm, a new development coming soon near the tollway and the Alma Drive intersection in Allen. This 135-acre project will include a combination of office, retail and residential space, according to a news release from JaRyCo Development.

An existing development that thrives on its proximity to the tollway is Craig Ranch, said James Craig, president of Craig International, a real estate brokerage, development and consulting company located in McKinney. Its CEO, David Craig, was the master developer of Craig Ranch.

“The Sam Rayburn Tollway has been an integral component of our success,” James Craig said. “It put us within a 20- to 25-minute drive time to DFW Airport, which is something corporate America wants to see. So when corporations are considering the McKinney Corporate Center at Craig Ranch, that’s an important box that they can check. As far as I’m concerned, the more mobility the better.”
Sam Rayburn Tollway McKinney Michael Rey McKinney Transportation Nicholas Ataie North Texas Tollway Authority North Central Texas Council of Governments Kevin Feldt The Farm at Allen Craig Ranch James Craig David Craig
SHARE THIS STORY