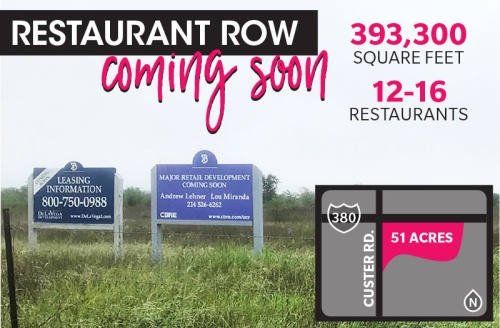 A restaurant row concept was approved by McKinney Planning and Zoning during a meeting in September.

McKinney’s long-awaited restaurant row is gaining momentum even as the city as a whole has seen an uptick in the number of dining establishments in the past year.

Years of efforts to bring more dining, retail and entertainment options to McKinney are beginning to pay off, according to a recent market study that shows that for the first time, McKinney is keeping more sales tax dollars in the city than it is losing to surrounding areas.

More options have begun to trickle into the area of late, including Firo Fire-Kissed Pizza, Dillas Quesadillas, Henderson’s Kitchen and Tap, Costco and a future Cinemark Theatres. All are businesses actively recruited by the McKinney Community Development Corp. and The Retail Coach, a retail economic development company hired by the city.

The next major project for the city is to flesh out what has been referred to in the past as restaurant row. The concept plan, which was approved by the McKinney Planning and Zoning Commission in mid-September, features 12-13 restaurants, 10-12 retail spaces and entertainment space totaling 393,300 square feet on 51 acres at the southeast corner of Custer Road and US 380. However, site plans from the developer show 15-16 restaurants coming to the area.

Renamed The Avenue at McKinney, the restaurant row is the result of a 2015 initiative McKinney City Council adopted as part of its strategic plan to begin actively recruiting businesses to McKinney.

“I know from the developer’s standpoint that what they are looking to create is a destination that would have entertainment, restaurants, and it may even have some sort of park-like amenities to make it a quality-of-life destination for people to spend their time,” said Cindy Schneible, McKinney Community Development Corp. president.

Before the developer De La Vega Development begins construction, City Council must approve the concept plan. A vote on this plan is expected to take place during a council meeting Oct. 2, after Community Impact Newspaper’s print deadline.

The city is currently negotiating with the property owner on a potential sales tax incentive that will go before council to be considered at a later date, Denise Lessard, McKinney communication and media manager, said in an email.

According to a 2018 study, McKinney residents are traveling to nearby cities to find more variety of restaurants, retail and entertainment. Assistant City Manager Barry Shelton said The Avenue at McKinney aims to provide a local source for the high-quality shopping and dining that residents are looking for.

The Retail Coach has completed two retail studies for McKinney—the first in 2015, and the second, which was recently released.

The 2015 study showed the city was losing 53 percent of its potential sales revenue to surrounding cities because of a lack of options for area residents. However, from January 2017-January 2018, McKinney saw a surplus in sales. The city brought in $2.8 billion in sales, compared to a loss of an estimated $2.6 billion in potential sales that was spent in other cities, according to the 2018 study.

After initiating a business recruiting program in 2015, Schneible and Shelton have since attended trade conferences and events, such as Retail Live in Austin and the International Council of Shopping Center.

“We’ve been working on this for three or four years, and you can definitely see a change in the environment,” Schneible said. “You can see that there is enough critical mass and enough demand for those restaurant, retail and entertainment opportunities that people are interested in.”

Aaron Farmer, The Retail Coach senior vice president, said that McKinney has the ideal demographics for a thriving business market.

According to The Retail Coach reports, McKinney residents have an average household income of $128,242, and 28 percent of the population has a bachelor’s degree-level education or higher—both of which are aspects that lead to a higher demand for more quality businesses, Farmer said.

“What’s really important to retailers is they pay attention to average household income, and McKinney is very strong,” he said. “The average person in McKinney also spends more on retail than the typical consumer.”

Shelton and Schneible present these demographics to retailers and brokers at trade shows in order for them to consider McKinney as a possible location.

“We will sit down with them and say, ‘Okay, look, we have 180,000 people, we have great demographics … and people like to eat out in this community, and a lot of people are leaving this community to do so because we have a shortage of high-quality restaurants,’” Shelton said. “We do have great restaurants, but people are clamoring for more variety. ...”

While several new restaurants and retail businesses have opened recently or are opening soon throughout the city, there is still more to look forward to in the next few years in addition to a restaurant row, city officials said.

Farmer said that The Retail Coach is currently negotiating with about 50 retailers and restaurants for McKinney.

The Retail Coach reports identified several submarkets in McKinney for future development, including Hardin Boulevard and US 380, Custer Road and US 380, and Hub 121 located at Alma Road and SH 121, among others.