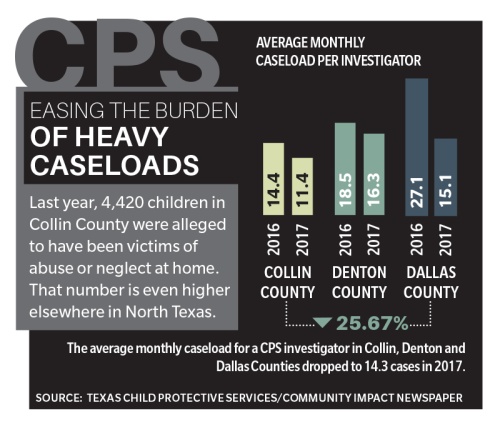 Last year, 4,420 children in Collin County were alleged to have been victims of abuse or neglect at home. That number is even higher elsewhere in North Texas.

The state of Texas last year approved funding and undertook other legislative measures to address a series of critical problems in the Child Protective Services system. Caseworkers were leaving their jobs at excessive rates, and caseloads were so high that it made it difficult to check on some vulnerable children in a timely manner.

Since then, conditions for CPS investigators, who look into abuse and neglect of children, have improved across the board—a fact acknowledged by children’s advocacy groups that have been pushing for reform and supported by data tracked by the state. Salaries are one-third higher, turnover rates are down, and caseworker responses to reports of abuse or neglect are timelier than their recent lows in 2016.

Last year in Collin County, 4,420 children were reported to Texas CPS as alleged victims of abuse or neglect. Investigators were able to confirm abuse or neglect occurred in more than one-quarter of those cases, according to the agency’s numbers.

In 2016, when turnover was highest, each CPS investigator in Collin County was asked to work on an average of 14.4 cases per day, state data shows.

“That doesn’t seem like a lot, but a few cases makes a big difference, particularly when the children need to be seen regularly,” said Katherine Howard, program director for CPS investigations in Collin County.

In 2017, after staff turnover rates improved, Collin County investigators averaged 11.4 cases per month—a 21 percent decline, according to Texas CPS. The percentage of Collin County children who were checked on in what the state considers a timely manner improved to 92 percent in 2017, up from 83 percent the previous year.

But challenges still exist to alleviate pressure on the state and local foster care system, according to local child welfare advocates who have shifted their focus to addressing those issues in Collin County and beyond.

The funding for additional caseworkers, higher salaries and other measures to strengthen the foster care system were viewed approvingly by TexProtects, a Dallas-based advocacy group which lobbies Texas lawmakers. The organization had been a vocal proponent of increasing state funding for salaries to improve caseworker retention.

“For 2017 we are incredibly encouraged by the $12,000 salary increase, for which we have been advocating for several years, and finally it came to fruition,” said Pamela McPeters, vice president of public affairs for TexProtects.

The statewide numbers showed an almost immediate improvement in employee retention. In fiscal year 2015-16, 25 percent of CPS employees left the agency. By August 2017, turnover had dropped to 18 percent. Investigative caseloads declined statewide by one-third in the same time, according to the CPS annual report from that year.

“Of course, their morale gets affected when people leave,” Howard said. “They each have more work to do.”

For the upcoming legislative session in 2019, advocates at TexProtects are turning their attention to other matters like further bolstering the state’s foster care system.

The county’s network of foster care families exceeds the number of Collin County children who are in foster care, according to the state’s numbers. However, Collin County foster families are often called upon to house children from other parts of the state.

“If there are no homes in Collin County that have vacancies for the age child that you need a home for, then you have to look elsewhere,” said Susan Etheridge, board member at Foster Friends, a nonprofit that supports Collin County foster children. “And so that creates a lot of problems.”

If a Collin County child is placed in a home in Tyler County, for example, the CPS worker is responsible for driving to Tyler to visit the child, Etheridge said.

As a whole, the state’s foster care system is strained at times to meet the needs of all the children who are deemed too at-risk to stay in their homes, according to the Children’s Advocacy Center of Collin County.

“That separation has very serious consequences on that child’s life, and placing them with somebody they know and someone familiar to them hopefully would decrease the trauma they experience,” Powers said. “And so definitely the first choice I know for any professional would be placing that child in some kind of family home.”

Advocates at TexProtects are now turning their attention to improving the foster care system, primarily by prompting the state to take advantage of provisions in a new federal law. The Family First Prevention Services Act, signed into law in February, offers resources to states that further incentivize relatives taking in children and alleviating pressure on the foster system, among other measures.

But the state will need to tighten up aspects of its foster care system to reap the benefits of the law, a major focus of TexProtects’ lobbying efforts in the 2019 legislative session, McPeters said.

Some of the funding for services in the bill is contingent on the state meeting standards for congregate care facilities, where children are sometimes placed in groups under supervision when they do not have a home to go to.

Another challenge for investigators and advocates alike will be keeping up with the rapid population growth in Collin County. As the population grows, Powers said, more will be asked of existing caseworkers and providers of counseling and other family services like those offered at the CACCC.

“Affluence, I don’t think, makes much of a difference in this world, unfortunately,” said Powers, who is also a former child-protection caseworker. “Child abuse affects every economic group, every ethnicity. We’re not immune to it here in Collin County.”