Faced with the reality that wages have not kept up with home values in McKinney, local leaders and community members are working to try to help with the city’s significant lack of affordable housing.

On Sept. 15 McKinney City Council accepted the findings of a housing needs assessment conducted by Root Policy Research, which showed that almost half the renters in McKinney use more than 30% of their income to cover housing costs. Among those renters, nearly half use 50% or more of their income for housing expenses.

“We knew that there was an issue,” said Janay Tieken, McKinney’s housing and community development manager. “Nationwide, you’d look at homelessness and affordability, so we know that there’s an issue. But it was really nice to get the data.” 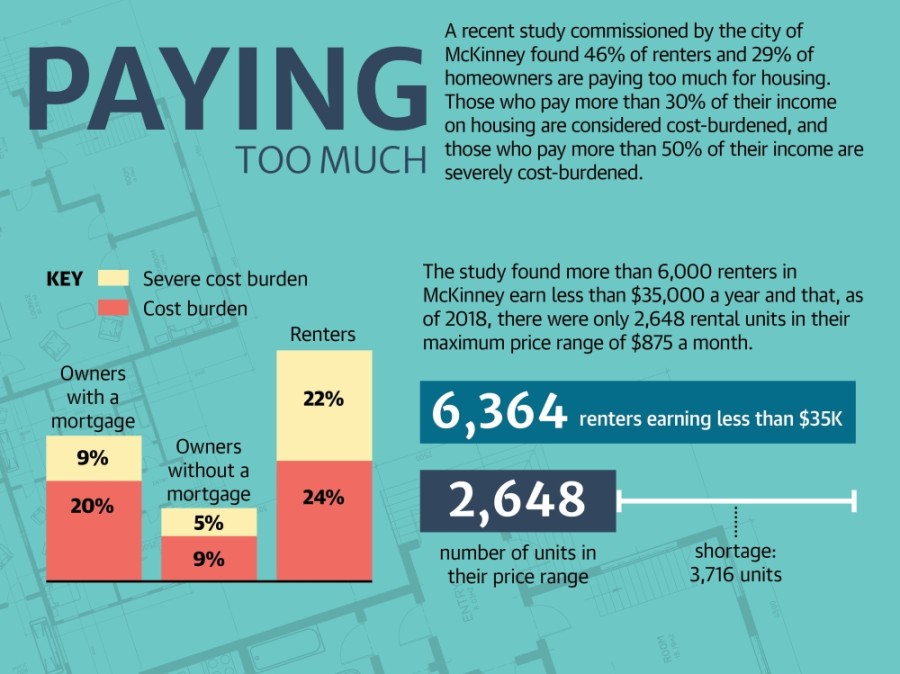 The study, which was conducted after March, considers how COVID-19 has affected residents in McKinney. Tieken said her department has distributed $1.83 million in federal funds to mortgage, rent and utility assistance since June 1 to residents who need help.

In addition to the effects of the virus, McKinney has experienced sharp home sharp home price increases since 2011, which can make it difficult for people to find places to live where they pay no more than 30% of their income on housing. Any more than that is considered a “cost burden” financially.

According to the latest five-year data from the U.S. Census Bureau, the median household income in McKinney is about $90,000. But nearly half of McKinney’s households make less than $50,000, and about 10% make less than $25,000 a year.

The McKinney Economic Development Corp. has of late been focused on attracting higher-paying jobs, MEDC President Peter Tokar said. But the service industry is one of those most affected by the lack of affordable housing.

Local businesses have told the city that they need more employees who can work at restaurants, nail salons, hotels, manufacturing facilities or other such workplaces, Tieken said. Those positions are difficult to fill and keep filled because the people who work those jobs often have to look outside of McKinney to find affordable housing, she said.

Back in February 2019, following a goal-setting workshop, McKinney City Council set aside almost $50,000 from the fiscal year 2019-20 budget to perform a strategic housing assessment, officials said.

“When there’s housing options for each stage of life—from career starts all the way through the aging adults—that really, in turn, helps support a vibrant economy by providing both workforce housing opportunities as well as retail opportunities and sales tax revenue as well,” she said.

One way cities can bolster their housing stock is by offering more affordable options not just for renters, but for homeowners, too, she said.

While single-family houses and apartments comprise the bulk of living options in McKinney, cities can help by supplying “the missing middle,” Fitzgerald said.

“A lot of times, we think about housing as either detached single-family homes or large apartment buildings, but there’s quite a bit in between that, particularly in the ownership market, can serve as a gateway to ownership for renters who would like to become owners,” she said.

These types of housing models include townhomes, duplexes, triplexes and condos, Tieken said. However, Root Policy Research’s survey found that McKinney residents, especially homeowners, were not inclined to agree that housing types other than single-family homes are appropriate for their neighborhoods.

“As the City considers efforts to increase ownership product diversity and affordability, it will be essential to help convey the benefits of these products and mitigate existing neighborhood concerns,” the assessment said.

“Every time we open up our applications [for Habitat homes], and we usually only open it up for about 30 days, we typically get 300 to 500 applications,” she said.

For every 100 people who apply, only about 10 end up being approved for a home, she said. Besides The Samaritan Inn or the McKinney Housing Authority, there is nowhere else Habitat can refer these people to, Cox said.

In addition, a realistic starting price for affordable housing is about $150,000, she said. 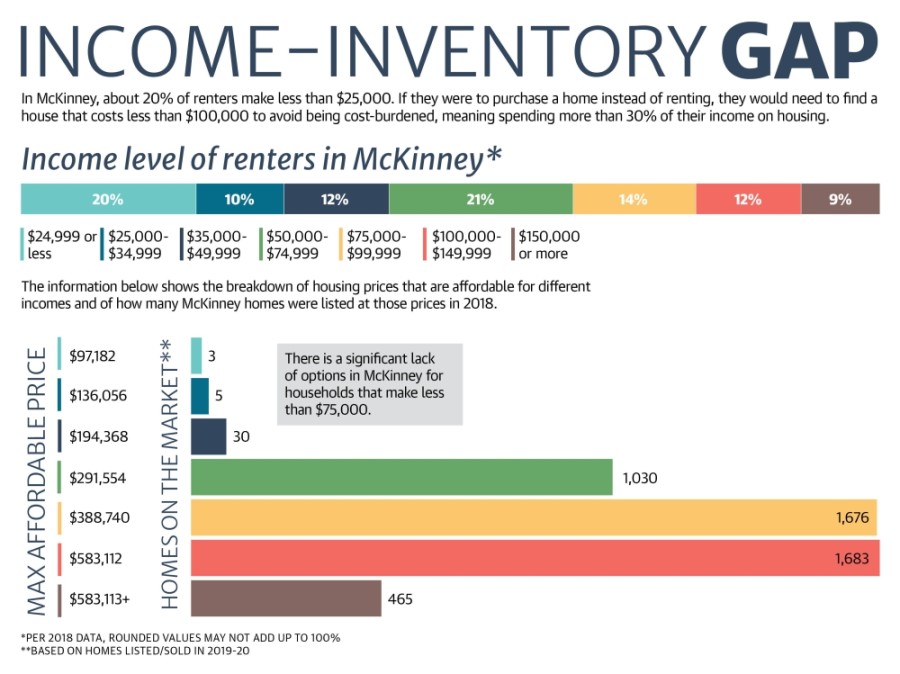 “That’s what we need for our families to be able to afford [a home], and there’s nothing out there in the market,” Cox said.

The scarcity of available land is not helping the issue, she said. Property is becoming less available as the area continues to grow, driving up land prices and building prices, she said.

The city offers programs targeting affordable housing issues, Tieken said, such as the Low-Income Housing Tax Credit program, which encourages developers to come in and make rents affordable in exchange for equity in the project.

Another program is tenant-based rental assistance, which provides housing for people for 18-24 months.

The state also provides certain resources. One project, the McKinney Flats apartment complex, is being funded with the help of Low-Income Housing Tax Credits issued by the state, in partnership with a development company and the city of McKinney. This project is expected to provide about 320 units when it opens next year at the corner of Collin McKinney Parkway and Test Drive.

However, these programs are imperfect. Scott C. Hudman, a public affairs specialist for the U.S. Department of Housing and Urban Development, said many HUD partners have waiting lists that “are literally years long.”

Tieken said she and her team are examining these recommendations and will present next steps to City Council later this year.

At their Sept. 15 meeting, McKinney council members agreed with the need for affordable housing but had concerns regarding the best way to solve the issue. Mayor Pro Tem Rainey Rogers was concerned that offering low-cost houses would invite others to purchase them and rent them out.

There are challenges that come with managing diverse housing stock, Fitzpatrick said in response.

“As we think about policy solutions to affordability, there’s no silver bullet to this,” she said. “[Policy solutions] are about creating opportunity for a wide variety of housing types to help solve some of that need, and it’s not going to be a perfect solution.”