McKinney ISD has four propositions in the May 1 election. They include $275 million in bond projects, adjustments to the tax rate and a decision on the district’s method for recapture payments. MISD leaders have said these measures are necessary for its 24,000-plus students.

A community committee helped the district review projects and needs for the next five years. At a January meeting, MISD’s school board voted to hold the election.

Because of a state law change, McKinney ISD must ask voters to approve the process it uses to make recapture payments to the state each year. 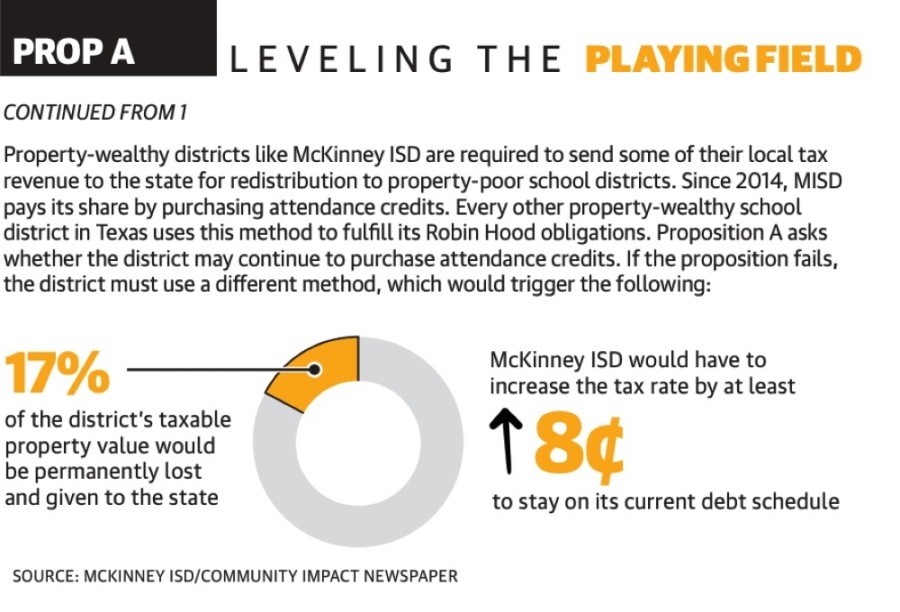 The recapture program, also known as Robin Hood, requires property-wealthy school districts to send some of their local tax revenue to the state to be redistributed to property-poor districts. The goal, according to state officials, is an attempt to create financial equity among schools.

Since the 2014-15 school year, MISD has paid more than $13.6 million in recapture payments by purchasing attendance credits from the Texas Education Agency. The revenue from these attendance credits gets redistributed to other property-poor districts.

Jason Bird, deputy superintendent of business, operations, accountability and technology, said that while the terminology is not straightforward, purchasing attendance credits is a simple concept.

“[The] Legislature doesn’t like using the term ... but it is writing a check,” he said.

Per Texas House Bill 3, which passed in the 2019 legislative session, all property-wealthy school districts are obligated to hold a one-time election to give voters the opportunity to approve or reject a district’s decision to purchase attendance credits. MISD’s attendance credit election was originally slated for May 2020 but was postponed due to the pandemic.

If voters approve Proposition A on the May 1 ballot, the district will continue to make payments as it has done for the past seven years.

“What I will tell you is this [would be] catastrophic to the district,” Bird said in a March 5 McKinney Chamber of Commerce meeting.

Superintendent Rick McDaniel said MISD would permanently lose about 17% of its taxable territory. That would require the district to increase its tax rate by at least $0.08 so it could make its debt service payments, officials said.

“It’s a one-shot only,” Bird said. “We are asking the voters to give us the authority to continue to pay our recapture payment in the most cost-effective manner that every single school district that is subject to recapture has used from the beginning [of Robin Hood].” 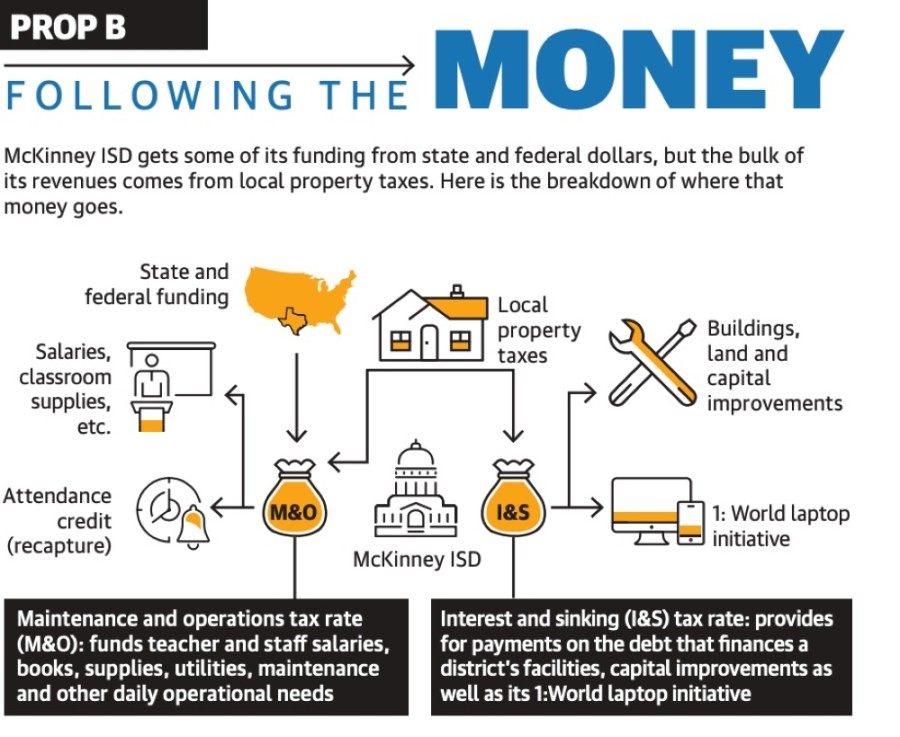 The owner of an average single-family home in McKinney ISD valued at $354,159 would see an annual tax break of about $112, according to the district’s website.

The language that voters see on the ballot is set by state law and addresses only the estimated $0.02 increase to the maintenance and operations portion of the tax rate. It does not mention the $0.05 decrease to the interest and sinking tax rate because districts do not need permission to lower their tax rate.

“We are definitely still on a mission to reduce the MISD tax rate as much as humanly possible,” MISD Chief Financial Officer Jason Bird said.

Superintendent Rick McDaniel said the goal of adjusting the maintenance and operations tax rate is to secure adequate funding for district essentials in the event that the Texas Education Agency does not reasonably furnish MISD with all its financial needs. The proposed tax rate would enable the district to legally max out its maintenance budget, bringing in an additional $3.1 million annually.

“[M&O] is the budget that school districts use for teachers, staff salaries, books, supplies, utilities, resources, custodial [services], insurance–all of those operational types of things that we have in the district,” McDaniel said.

Having more flexibility on the “M&O side of the house” will help the district continue to provide competitive teacher salaries and guarantee high quality programs and smaller class sizes, McDaniel said.

“If it fails ... we could be required to increase our class sizes. [We might] be limited in our ability to continue to provide the quality ... programs that our students and parents have come to expect,” McDaniel said.

Areas affected could include fine arts programs, athletics, gifted and talented and career and technical programs, district officials have said.

Even though the overall tax rate would decrease by about $0.03, homeowners may not see a lower tax bill because property values continue to increase in McKinney. 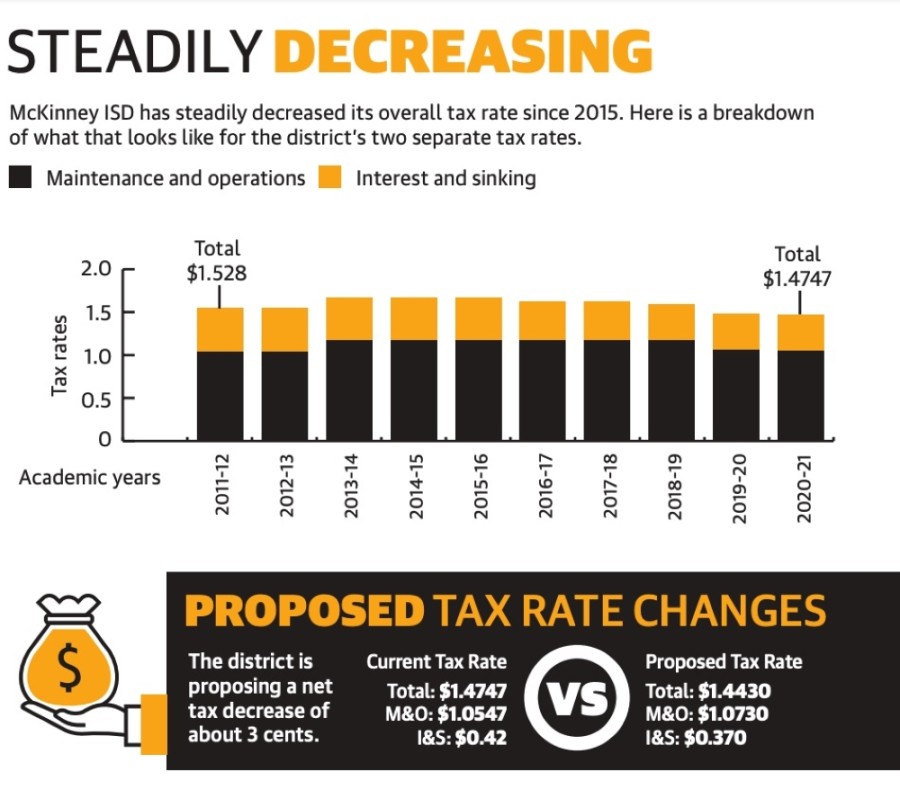 In the last five years, the median home value in McKinney has increased by 59.54%, per the US Census Bureau.

Local property values are set by the Collin Central Appraisal District—not by MISD.

Because of the way school finance works, MISD does not benefit as much from that increased tax base.

State law caps what MISD is legally permitted to keep in its own wallet. Robin Hood requires the property-wealthy district to send any excess revenue back to the state to be redistributed to other districts.

McKinney ISD has proposed a $245 million bond to address a host of capital improvements, from an athletics and fine arts program refresh to a new campus in the growing northern portion of the district.

A committee of McKinney residents—called Project Kids—collaborated with the district to analyze campus needs. The committee ultimately recommended a $245 million bond that, if supported by voters, would provide MISD with expansion and renovation projects that would affect every district campus.

One of the top items includes a new school in the growing Trinity Falls area. Since 2016, Press Elementary has seen a 21% increase in enrollment. The bond measure would include $35 million to build Elementary School No. 22 to accommodate projected growth there.

The bond also includes the addition of more security cameras, lock-down buttons and safety-related infrastructure; playground improvements at all elementary schools and other investments the district considers key for continuing a high-quality education.

Proposition C also includes funding for tech purchases that deal with infrastructural needs, but not the “actual computers themselves,” Superintendent Rick McDaniel said. These infrastructural items include everything from audio-visual equipment to data storage security systems.

These plans are contingent upon the measure passing. If Proposition C fails, students might see larger class sizes and lower-quality extracurricular experiences, district officials have said.

MISD is taking a more fiscally conservative approach by asking for less money in five-year increments instead of trying to predict 10 or more years’ worth of needs, according to Cody Cunningham, MISD’s chief communications officer.

Jim Robertson, the head of the Project Kids citizen committee, said he believes the bond program is “critical” to ensure McKinney flourishes in the future.

“It just makes good sense whether you have kids in school in McKinney ISD or you don’t,” said Robertson, who has worked or consulted on eight school bond programs for various North Texas districts during his career.

Angie Bado, who served on Project Kids and is involved in the pro-bond political action committee, Vote For MISD Kids, said she supports the proposed $245 million investment in district buildings and programs.

Without campus updates, small class sizes, competitive salaries and state of the art programs and facilities, McKinney could experience economic stagnation in the future and miss out on growth opportunities, Bado said.

“Our economic success is partly dependent on our great schools,” Bado said. “If we’re not able to bring business in because our schools aren’t wonderful, that hurts everyone in the entire community and also devalues our property.” 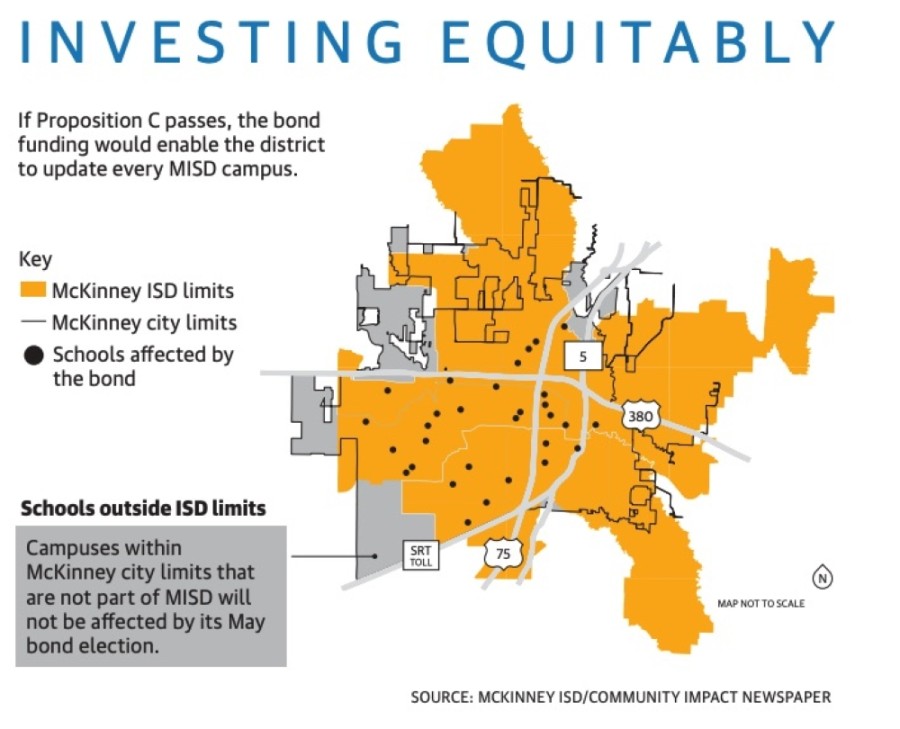 District staff have also said they worry about the possibility of the district not being able to offer competitive teacher salaries.

Since the 2015-16 school year, MISD has increased its average teacher base pay from $53,456 to $60,642 to stay competitive with other North Texas area school districts. Proposition C would allow MISD to make purchases using bond funding rather than its maintenance and operations budget—which also pays teacher salaries.

If Proposition C passes, the district will also purchase a fleet of school buses instead of outsourcing and funding transportation using maintenance and operations money.

McDaniel said more funding for buildings and program improvements could prove crucial for the city’s future.

“McKinney ISD has established over the past decade an extremely high standard in terms of education, in terms of our facilities, in terms of the type of teachers that we have and the expectations for faculty and staff members,” McDaniel said. “In order for our community to continue to enjoy the highest standard which we’ve already set ... it is essential that we continue to improve our facilities [and] that we are able to pay the highest quality staff members available.”

To make good on its commitment to expand its 2014 1:World technology initiative, McKinney ISD is asking voters to approve a $30 million technology bond. 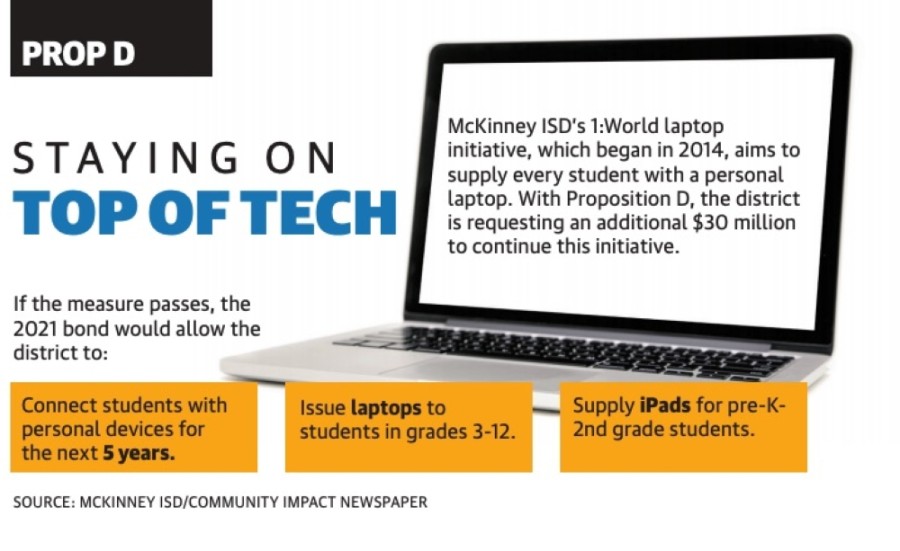 The funding would allow the district to continue providing a laptop for every MISD student in grades 3-12 and an iPad for all learners in second grade and below for the next five years as well as allow for the replacement of old computers, officials said.

Chief Communications Officer Cody Cunningham said one of the goals of the 2014 initiative was to improve equitable access to education across the district.

“One of the big reasons that we were looking at doing that was really to level the playing field so every student would have access to the same type of technology [and] to the same programs,” Cunningham said.

While the initiative targeted only high school freshmen in 2014, the district accelerated the scope during the COVID-19 pandemic due to the demands of virtual learning. Trustees voted in May 2020 to provide laptops to every student in the district starting in the third grade.

Cunningham said expanding the program even more by trying to purchase MacBooks out of MISD’s operations budget could create unnecessary financial strain—especially since that is where most Texas school districts find themselves strapped for cash.

The operations budget furnishes needs such as teacher salaries, books, supplies and costs relating to maintaining school buildings. Buying computers with these funds might take away money needed in other areas, such as competitive teacher salaries and top-funded extracurricular and educational programs, among other things.

The investment in devices is separate from the school building bond because of a recent state requirement—not because staying on top of the district’s tech needs is less important than upgrading buildings, Cunningham said.

If this bond fails, there could be a shortage of functional computers for MISD students and staff.

McDaniel said the devices MISD owns were “not designed for current usage or enrollment”—much less the district’s projected growth. Updated, accurate enrollment projections are not available due to COVID-19.

Because the pandemic expedited advances in virtual learning, MISD wants to be forward thinking, according to staff.

More information, including 2021 election FAQs, videos and presentations are available at the district website, www.mckinneyisd.net/about-misd/2021-election.