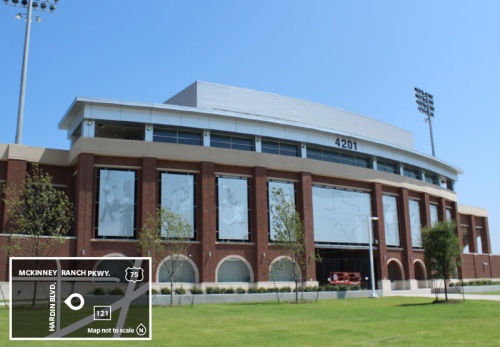 As the saying goes, football is king in Texas, and the nearly $70 million McKinney ISD stadium and community event center is one way the district is embracing the sport and community draw. However, MISD Superintendent Rick McDaniel said the stadium is more than a place for sports.

“We want this to be a family-friendly environment, so that it doesn’t become a one [time] go see the stadium and [be] done,” McDaniel said. “We’d like it to be something that our community embraces and it becomes a part of their weekly routine and that they’re proud to say that they get to go to the finest stadium in the nation.”

The first football game, held Aug. 30 at the stadium located at the southeast corner of Hardin Boulevard and McKinney Ranch Parkway, comes more than two years after voters approved a $220 million bond package that included money for the new stadium and event center.

During the 2018-19 school year the CEC will be used to host student and teacher events, districtwide training and other school events. In addition to football McDaniel said the stadium will be used for soccer and band competitions and likely be used for club lacrosse and professional concerts.

It has been a long road of construction delays and cost increases, but the stadium is officially open for the 2018-19 football and soccer seasons. However, the stadium will close in the spring for necessary concrete repairs, and the CEC usage will be limited.


How did we get here?

Voters approved a bond in May 2016 that was intended to help fund the then-$62.8 million stadium and event center; however, in August 2016, MISD district officials announced a $7.1 million price increase due to an increase in the price of concrete, labor, road construction and market inflation.

In December 2016 construction on the stadium began with an expected opening in February 2018. After delays in sewer construction near the stadium the opening date was pushed back to May or June 2018, according to a presentation during an August 2017 board meeting.

More problems were found in January 2018 causing the stadium opening date to be placed on hold while district officials, Manhattan Construction and architect Stantec investigated concrete cracking found throughout the stadium. Cracking was found at the visitor concourse, home concourse and visitor and home concourse lower bowl wall, according to a report from Nelson Forensics, an investigative and forensics engineering company hired by MISD to review cracking at the stadium.

The two of three reports from Nelson Forensics show cracking in the stadium’s concrete does not pose a life-safety concern, meaning the stadium could be used now and repaired at a later date.

According to the reports, “excessive” cracking at the stadium was caused by excess water added to the concrete mixture during construction, a reduction in the concrete cross section due to the inclusion of drag reinforcement at the east-west pier lines and insufficient steel reinforcing to control shrinkage in cracking.

Any financial costs associated with the areas of concern will be paid for by Manhattan and Stantec, MISD Chief Financial Officer Jason Bird said during a June 26 board meeting.

Although the stadium will be at full usage during the 2018-19 football and soccer seasons, repairs to the concrete will still need to take place, and the community events center usage will be limited until repairs are completed.

McDaniel said repairs will be made in mid-April 2019 after a regional soccer tournament held at the stadium.

“There are different degrees of repair that we need to take place,” he said. “It would be extremely hard for me to say they will do this here and this there.”

Manhattan and Stantec declined to comment, saying the companies would defer comments to MISD.

“Everyone understands the expectation that we will play there this year and we will play there next year,” said Cody Cunningham, MISD’s chief communications and support services officer. “I think that obviously there is a goal to finish [construction] earlier in the summer. … But the No. 1 goal is to make sure that it’s ready for the next season but also that [repairs] are done right. So if it takes a little longer, I think that’s less of a concern to us as long as it’s done when we need it done and it’s all done right and we don’t have to go back and do anything later.”

Depending on spring weather, repairs are anticipated to be complete by July 1, 2019, McDaniel said.

As of Aug. 29, which was Community Impact Newspaper’s print date, the district had received two of three reports from Nelson Forensics.

Cunningham said the district does not have any indication as to when the third report will be released, but said he expects it to be “relatively soon.”

Once repairs are complete, the district will open the community event center to the public.

“Even though we’re going to receive a temporary certificate of occupancy to use the stadium this year, we’re not going to start using the community event center citywide ... until we receive our final certificate of occupancy,” McDaniel said. “However, McKinney ISD activities, professional development activities and the city of McKinney [will be able] to use it during that time frame that they’re fixing [the concrete cracking].”

When the center is open to the public, individuals and groups may rent the space for a fee. McDaniel said those interested could contact the stadium and CEC manager and assistant athletic director Corey Homer.

“I think the majority of use of [the] CEC will be the district anyway just because of the need, but we really don’t have a large professional development space right now so we have to pull teachers together,” he said. “We’re always scrambling. We go to Collin College; sometimes we will find local venues we can meet at. So [the CEC] will give us that opportunity.”

Due to anticipated ongoing repairs during the time of graduation, McDaniel said graduation for the class of 2019 will take place at the Allen Event Center rather than the stadium or CEC.
SHARE THIS STORY