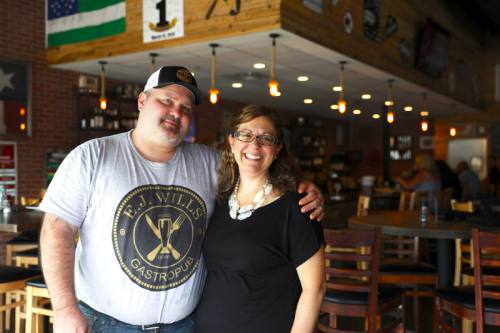 Greg and Joy Booth named their McKinney restaurant by combining their daughtersu2019 initialsu2014u201cEu201d and u201cJu201du2014and adding in a reference to their strong wills.

Joy and Greg Booth saw a gap they could help fill in the McKinney community when they began planning for E.J. Wills Gastropub. The restaurant moved to McKinney from its two-year-old Dallas location in March 2018.

“We always wanted it to be in McKinney,” Joy said. “We knew it was going to be quite a while before we could build this from the ground up, so we opened in Dallas while we were waiting.”

E.J. Wills serves the need for food that appeals to a wide array of people’s appetites, especially on the west side of McKinney, where there are fewer novel food options, Joy said. The restaurant also strives to support the neighborhood, she said.

In an effort to encourage that community, E.J. Wills hosts guest bartenders every week from local organizations. The restaurant had more than 30 guest bartenders in the last year and has raised thousands of dollars, Joy said.

“They don’t really have to know anything about bartending,” she said. “They just have to want to support their charity.”

E.J. Wills hosts spirit nights for local organizations and sets up food tents at as many local festivals as possible, including a recent local food and wine festival. Trivia nights and live music are also frequently featured.

In the kitchen, changes to the menu come roughly every three months to match the food options with the season. The restaurant has recently developed a vegan menu, which is certified by the Plant Pure Community.

Written on the wall of the restaurant in large script is the motto of the E.J. Wills Gastropub: “Where friends and flavor come together.” Joy calls this message the kernel that the restaurant has grown on.

Editor's note: This article has been updated to clarify that Greg and Joy Booth are the owners of E.J. Wills Gastropub.