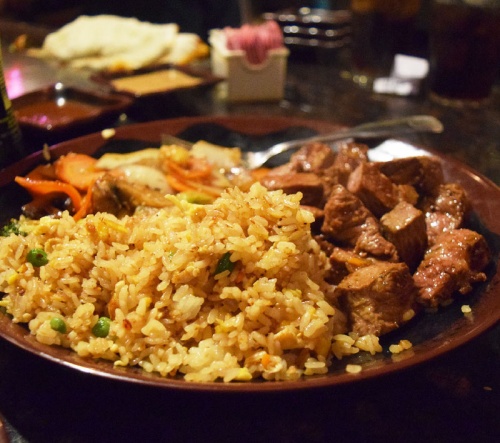 Editor's note: This article has been updated to include Shogun Hibachi & Sushi Japanese Steak House's address in McKinney.

At Shogun Hibachi & Sushi Japanese Steak House customers can choose to sit at a regular table or a hibachi table, which is a Japanese-style stovetop that guests sit around and watch chefs prepare the food.

Co-owner Joe Chow said customers enjoy watching the hibachi chefs prepare their food while doing tricks and being interactive, which makes the restaurant a great place for family outings and special occasions.

“McKinney is booming … and good for families, so our restaurant is a family restaurant,” he said. “It’s good for birthday parties or all kinds of parties. It’s always a big celebration here.”

Chow, who is originally from China, said he has been in the hibachi business for more than 20 years and opened Shogun in 2005 at 1230 N. Central Expressway, McKinney. Chow owns and operates Shogun with co-owners Michael Nguyen and Chef Michael Basha.

Aside from the entertainment, food quality is a top priority at Shogun, Chow said, which is why the restaurant uses fresh ingredients and makes everything from scratch, including the sauces and dressings. Chow also said customers love the Shogun fried rice, which comes complimentary with hibachi dinners.

While food and entertainment are important, Chow said customer service is also important, so the owners put employees first. When a business has happy employees, it makes the experience better for the customers, Chow said. Of the 13 chefs working at Shogun, Chow said most of them have worked there since the restaurant first opened.

Shogun currently has eight operating hibachi tables, but Chow said he plans to eventually add more and install a second bar in the back room of the restaurant.
SHARE THIS STORY