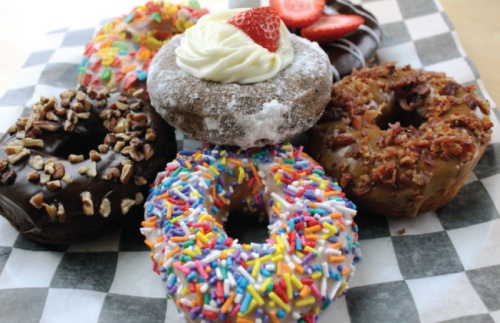 The Donut Kitchen opened its McKinney location in November.

Editor's note: The headline and description of dishes served at The Donut Kitchen have been updated.

When Michael Davis and his family opened The Donut Kitchen in the summer of 2014 in McKinney, it was one of the few eateries in the Stonebridge Ranch community.

Davis comes from a construction background and had always been self-employed, but he said the restaurant business interested him.

“All I was going to do was doughnuts. I’m a doughnut guy, and I was not a big fan of the doughnuts around town,” Davis said.

When Davis told his wife, Leslie, about his plan, she told him to serve breakfast and lunch items as well.

Davis said he was not nervous about setting out on a new venture with his family because he believes McKinney is a good community, and if there was something patrons did not like, the business would make adjustments. However, he said business has never slowed.

“People loved that we were a family-owned restaurant and not a chain. ... We gave people in the area a place to enjoy a great family meal,” Leslie said.

Now, after four years in business, The Donut Kitchen is getting ready to expand with two additional locations­­—one in downtown McKinney and one at The Star in Frisco.

Davis said part of the expansion is to also provide more opportunity for his son, Riley, and his girlfriend, Montanna Christoffersen, because they are now part of the business.

Davis said as they plan for the expansion, they hope to continue to serve doughnuts and "creatively simple" dishes in a family atmosphere.

“We want the customers to have food they’ll come back again for, and we want them to feel right at home here at The Donut Kitchen,” Davis said.