The city wrapped up its Light Up Louisiana project in September 2021. The project included improved infrastructure and additional lighting along Louisiana Street in downtown McKinney. (Brooklynn Cooper/Community Impact Newspaper)

Childs-Wiley and other business owners in historic downtown McKinney have said the variety of attractions—a record store, a fusion plant and coffee shop, a retro arcade—make the cultural district unlike any other in the nation.

But the very qualities that make downtown a destination are what led to challenges during the COVID-19 pandemic, Downtown Development Manager Andrew Jones said.

Many businesses in the city’s historic district were not considered essential, so they were forced to shut down at the height of one of the country’s most devastating economic crises.

“That was very scary initially and led to a lot of anxiety within our business owners,” Jones said.
RELATED STORIES

• Christmas concerts, festivals and more things to do in McKinney this holiday season

Today, sales tax data show that downtown has more than recovered from the setbacks brought on by the pandemic.

“We don't really use [last year] as a baseline just because everything should be better than 2020,” Jones said. “We look back to 2019 because that was a great year for downtown, and we've consistently had double-digit growth in sales tax since March.”

Jones said that part of that success is attributed to the resiliency of business owners.

Recovering from the pandemic

Like other parts of McKinney, and the country as a whole, downtown saw stores and restaurants permanently close their doors. However, many more pivoted in an effort to keep their businesses alive.

Restaurants relied on alternative methods to dining in, such as delivery apps and to-go orders, while other merchants focused on e-commerce, said Amy Rosenthal, director of McKinney Main Street.

The city led workshops for business owners to learn how to creatively stay open, such as social media marketing techniques and online sales. People slowly made their way back to downtown during the rise of socially distanced events, such as wine walks and outdoor music events, Jones said.

In the midst of this resurgence, the city completed its multimillion dollar Light Up Louisiana project, which added lights, improved infrastructure and created wider sidewalks along Louisiana Street.

And while business owners and the city of McKinney worked to keep patrons engaged during the pandemic, new eateries and shops arrived, adding more variety to the downtown area. Mad for Chicken, McKinney Hat Company and Red Zeppelin Records are a few of the more than a dozen new businesses that landed downtown in the past year. 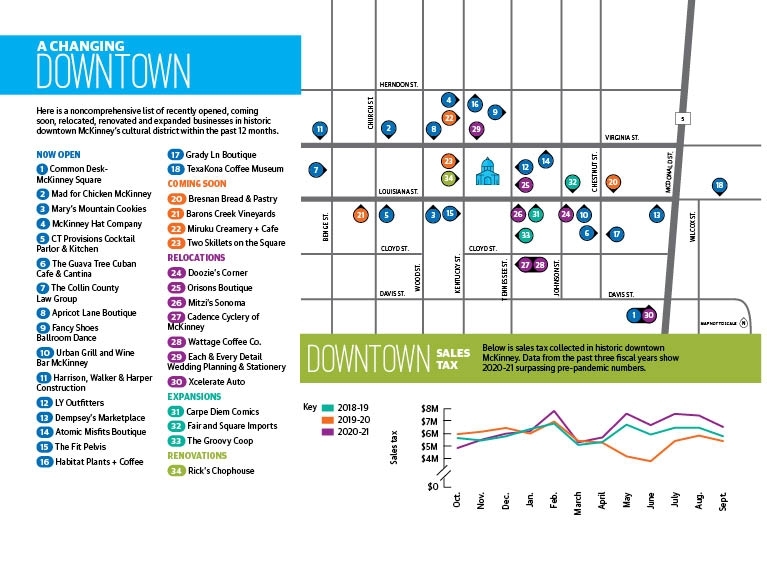 In addition to novel businesses, existing downtown owners experienced success within the past 12 months.

The closures that the area saw led to what Shadow Wiley calls the “downtown shuffle,” or the relocation of merchants from one part of downtown to another.

Wiley and his wife, Melyssa Childs-Wiley, are co-owners of Carpe Diem Comics. The comic book shop moved in April from Virginia Street to a larger space on Louisiana Street after Doozie’s Corner relocated to a smaller space on Louisiana. Doozie’s move was prompted by the previous tenant retiring.

The Canine Cookie Company moved three doors down into a bigger space on Louisiana Street in September of 2020. Originally, the pet boutique shared the space with Kitchenwares on the Square, but that business has since shifted to primarily online sales, leaving the store space for co-owners Stephanie and Craig Farrar.

Stephanie said the relocation provided multiple benefits. It allowed customers to shop while social distancing, which they were not able to do in the previous store. The move also gave dogs room to roam with their owners.

“When you put dogs into a tiny space, you run the risk of them feeling cramped and having a dog fight,” she said. “Luckily, we never had anything like that in our old place... Now, they come in, they lay down, they're comfortable, they're relaxed. It's really a dream come true.”

Although the Farrars eventually became the sole tenants of 213 E. Louisiana St., shared spaces are growing in popularity among other owners downtown.

The Pantry, a restaurant that specializes in Southern comfort food, opened its doors to Cocktail Creamery in May of 2020. The business serves both alcohol-infused and regular homemade ice cream from a freezer chest on one side of the eatery.

Sharyn Lindblad, co-owner of Cocktail Creamery, said one of the benefits to sharing a space is the absence of construction expenses. Another is what she calls “crossover business.”

“You can have people that are coming in who've found us on ice cream, but then they realize, 'Oh, there's food here,' and they may come back another time to eat food from The Pantry,” Lindblad said. “But then people will be at The Pantry and then they want dessert from us.”

Workplace Hospitality, the company that owns the building partly occupied by Common Desk, is still searching for tenants for the third floor.

Daniel Doyon, senior managing principal at Workplace Hospitality, said that shared office spaces have existed for years, but the pandemic exacerbated the need for them. He added that downtown McKinney is an ideal spot for a coworking space because of the proximity to other daily essentials.

“You've got all these urban amenities within walking distance,” Doyon said. “You've got restaurants, bars, coffee shops, all kinds of things to do, which you actually don't find very often... it's a rare combination of being well-located in the suburbs and being close to decision makers and white collar workers.”

Staff proposed the city of McKinney allows one miniature swine under 150 pounds per single-family residence. These pets would not be allowed in multifamily residences, however, and other restrictions could be applied.

New furniture store to open off University Drive in McKinney

The store will offer living room, bedroom, dining room and children’s furniture, as well as home decor and accessories.

The restaurant is going through its inspections before it can get its certificate of occupancy from the city, the general manager said.

The pizza eatery features a pizza theater store design, meaning it has an open concept that allows customers to view how their pizza is being made.