With Tupps Brewery relocation, McKinney readies for east side redevelopment

McKinney is teaming up with Tupps Brewery on a multimillion-dollar project meant to jumpstart revitalization east of Hwy. 5 and potentially turn that area into a second downtown.

As part of the deal, Tupps will renovate and move into the city’s historic grain site. Not only will this provide some much-needed room for the brewery to expand, but it will also complement other developments planned for the area known as The Mill District, such as the upcoming City Hall, officials said.

Tupps intends to create a “world-class cultural and entertainment destination” that will serve as a “catalyst for economic development east of Hwy. 5 in McKinney,” Tupps President Keith Lewis told the McKinney Economic Development Corp. board in May. He expects to open the brewery at its new location by early 2022.

The grain site is located at the corner of Greenville Road and Dungan Street across from The Mill at East McKinney event venue. With the relocation, Tupps Brewery would be one of the first major developments on the east side of downtown.

“We thought something like [Tupps] would bring that activity and would really jumpstart the district over there,” Assistant City Manager Barry Shelton said. “Hopefully it will lead to other restaurants and retail and users that could fill in some of our historic buildings.”

Long before Tupps, McKinney City Council and staff knew they needed to head east for development. A new City Hall on the east side of McKinney has been in the books since about 2006, Shelton said.

“We accomplish a lot more with the same dollars than we would have if we built it right here next to where we are,” he said.

In addition to City Hall and Tupps, some additional projects are being looked at. Across from the former McKinney grain site is the Flour Mill, which functions as a wedding venue and has some offices leased on the ground floor, Shelton said. 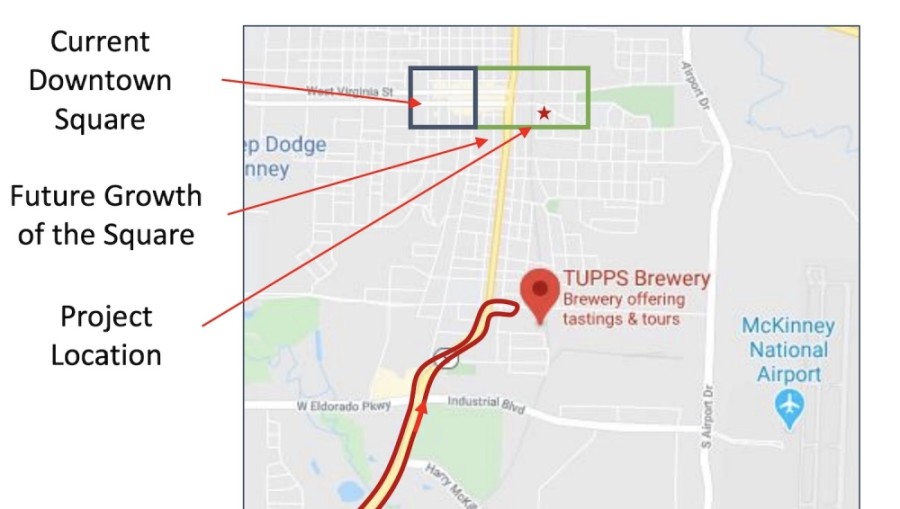 Eventually, the upper floors would be renovated and could become unique office space or loft apartments, he said.

“I know [the owners] have some big plans for that. I don't know exactly which direction they're going to go, but I know as the district takes off, they're more likely to get those investment dollars,” Shelton said.

The former owners of Patina Green have also purchased some buildings near the upcoming Tupps location, which will probably be turned into antique stores, officials said.

The city has also made progress on a few other projects in downtown, including expanding the availability of shared parking spaces for businesses not just in downtown McKinney, but on the east side of Hwy. 5 as well.

Another move forward happened Sept. 1, when McKinney City Council members approved a resolution that would grant staff the ability to begin eminent domain proceedings for a new public parking lot east of Hwy. 5 between East Louisiana Street and Anthony Street. The property serves as a home to some trailers and mobile homes, and if the eminent domain does become needed, the city would assist with the relocation of these uses, Fuller said at the meeting.

Some residents on the city’s east side have told City Council they feel pushed aside or forgotten as much of the growth has occurred to the west over the past few decades, according to Shelton. He said rejuvenating the east side’s older industrial properties will help address that.

“The idea was really to give [the east side] a shot in the arm with some activity,” Shelton said. “If we locate our City Hall where we have something like Tupps next to Local Yocal [restaurant], then it becomes a district where people go to hang out.”

However, some residents are concerned about what east side redevelopment might do to their property values. During an early August virtual town hall with people who live on the east side, some residents voiced concerns that they would not be able to afford higher property taxes that come with rising values.

“I’d love to be a city that for the first time watches existing owners be able to ride that wave of economic growth and development and not be a victim of it,” Mayor George Fuller told the McKinney Community Development Corp. board at its May 28 meeting in response to the expected development Tupps will bring.

Fuller said the city is actively investigating how to ensure residents are not priced out of their homes but are allowed to be part of the area’s growth and development.

“Our job as a city is how can we protect the residents that currently live there when those things happen because they will happen,” Fuller said. “Inevitably it’s going to happen, whether Tupps is there or not.”