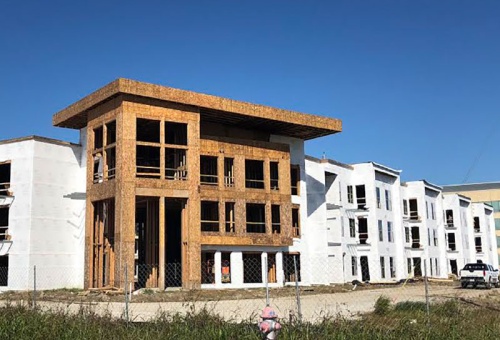 At least13 apartment developments are under construction in McKinney.

Even as 13 apartment complexes totaling 3,200 units are under construction, the city of McKinney recently made a change to a zoning ordinance that limits where multifamily units can be built in the future.

Up until the adoption of the ordinance change in late August, developers could construct apartments on any commercially zoned land without city approval.

“We went in and closed that loophole, and now you can’t [build apartments on any land zoned commercial]—you can only build multifamily where multifamily is zoned specifically,” Mayor George Fuller said. “We want to protect our commercial districts; for example along [SH] 121, there have been apartments built all along there, and that’s one of our main commercial districts. So we want it to be planned and our commercial business corridors to be something that’s balanced in the community.”

Changing the ordinance aligns the zoning with the One McKinney 2040 comprehensive plan approved in October, Assistant City Manager Barry Shelton said. The adoption of the comprehensive plan speaks to city officials’ desire to create destination districts throughout McKinney in order to attract businesses and residents of all types, according to the plan.

“A good, balanced community should have a mix of single-family and a mix of different levels of multifamily, and it should have some density because that density helps us to build places,” Shelton said.

“Certainly I don’t want to be painted as someone that says, ‘Let’s build apartments as fast as we can’—no not all—but [apartments] are an important component of every community,” Fuller said.

Although the zoning requirements for apartment construction have been tightened, Shelton said the change will not have an impact on the frequency of apartment development.

The ordinance was amended to allow city officials more control in the development process by having a say in where apartments should be built and in some cases what types of apartments work best in certain areas, Shelton said.

“[This change] will now give the planning and zoning commission and the City Council the opportunity to look at the zoning request and determine whether or not the location is appropriate for a flip to residential uses or should it remain commercially zoned,” he said.

Some areas in McKinney, particularly in the southwest corner, include planned development zoning districts requiring urban residential standards, Shelton said in an email.

Urban residential-style apartments are typically a single, four-story or taller building with close proximity to the streets and large sidewalks. The development also includes a parking garage or parking structure and may contain retail and commercial uses on the first floor.

Renting has become appealing to individuals of different socioeconomic statuses and demographics for many reasons, and according to Shelton, it is important to have a variety of apartment types to provide living options to a variety of people.

Nolte said she also enjoys the low-maintenance lifestyle of apartment life, including no lawn care, cheaper utility bills, valet trash pickup and amenities, such as a pool.

Another trend the city is seeing is the concept of apartments being the “live” component for “live, work, play” developments. For example, Davis at the Square, owned by Columbus Realty Partners, is seeing tenants who want to live close to downtown, and many of their rents are comparable to a mortgage on a home, Fuller said.

“There are millennials; there are professionals who all want to live downtown and be able to walk out their door, go get coffee on The Square, get meals on The Square, go to the [McKinney Performing Arts Center] or the comedy [arena], and it’s just a lifestyle thing,” Fuller said. “… They choose to live there because it’s a place to enjoy.”

A large portion of apartment dwellers include teachers as well as fire and police personnel who do not necessarily qualify for rental assistance but might not have means to afford a home, Fuller said.

Compared to surrounding cities McKinney apartment rent, on average, is more affordable. As of Sept. 30 the average rental rate in McKinney and Allen is $1,191 per month, while East Plano and Richardson average at $1,245 per month. West Plano, Frisco and East Lewisville average at $1,275 per month, according to ApartmentData.com.

“Affordable housing is a need for our workforce,” Fuller said. “We need to have a rent option for a huge part of our population, and as values of our homes go up, it more and more accentuates the problem.”