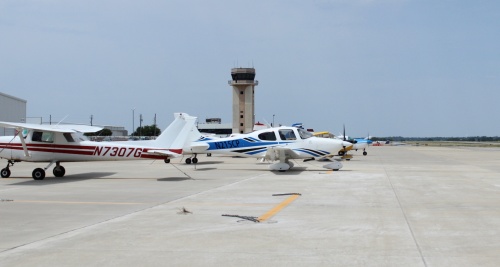 Since December the McKinney National Airport has opened a new hangar, purchased 190 acres of land and broken ground on a new terminal.

As usage continues to grow, McKinney National Airport is relying less and less on city funds, despite major financial investments at the airport, including land purchase and the construction of a new terminal.

After voters in 2015 turned down a $50 million bond proposition to fund the airport, city officials have found others ways to continue airport expansion, including using property tax and sales tax dollars, and generating revenue from fuel sales in addition to hangar and office leases. The city is now also venturing into a public-private partnership.

Due to the airport’s profitability, it has begun decreasing the amount of money received from the city. The airport will receive $200,000 in FY 2018-19 from the city, and McKinney National Airport Director Ken Carley said the airport is on track to receive no funding from the general fund in FY 2019-20.

“[City Council] didn’t want debt to be issued at the airport,” said Jose Madrigal, McKinney deputy city manager. “So we have listened to [council’s direction] and abided by that and found other resources through cash that we had on-hand to build and [develop] the airport.”

Since December the McKinney National Airport has opened a new hangar, purchased 190 acres of land and broken ground on a new terminal and hangar. The airport is also in the final stages of completing its master plan, which will serve as a roadmap for the future of the airport for at least the next 20 years.

In 2013 the city purchased the airport’s fixed-base operator, or FBO, which provides services at the airport, including fuel and hangar rentals, and buildings located at the airport. The city now owns 965 acres of land comprising the airport. The airport serves corporate and private planes, including AirFlite, Playful Corp., Encore Wire, Monarch Air and Dallas Jet International, and has created more than 320 jobs.

“The demand is there, and we’re in conversations pretty much continuously with people interested in projects here,” Carley said. “[The airport is in] discussions with a couple different groups on different types of projects on the land that we have now. And I don’t see that changing anytime soon.”

From fiscal year 2016-17 the airport has seen a more than 11 percent increase in operations, according to data from the McKinney National Airport. During the same time frame, fuel use at the airport increased 2.15 percent.

“[McKinney National Airport] has been seeing growth in their operations since 2010 or so annually,” said Ernest Huffman, principal transportation planner for the North Central Texas Council of Government. “… Those operations tend to be derivatives of what’s going on at other airports [in the region].”

There are about 170 people on the waiting list for T-hangars, Carley said, and the airport often receives inquiries about temporary and overnight shelter for flights flying in and out of the airport.

In response to the growing need, the city has developed a public-private partnership with Western LLC to build a new FBO terminal and a new 39,900-square-foot transient hangar.

The airport will pay Western LLC back for the $6 million contributed to the two projects with funds collected from FBO revenue, including renting out the hangar, Madrigal said. Once paid off, the hangar and terminal will belong to the airport.

“As you look at that shifting of all these corporations coming here, we are now the closest airport to [these companies],” Madrigal said. “So, a lot of the stuff that you used to have to get down in downtown Dallas has already moved up here to Collin County; we’re the closest airport. … We are now getting [more of] that demand [than] we can possibly handle because everybody’s looking now like, ‘Oh, I can come to [McKinney National Airport] and do a 10-minute drive on a 70-mile-an hour road to get to Plano … instead of having to go down to Addison and fight the [Dallas] North Tollway traffic. So as long as that continues to grow, we are going to be booming and then able to develop with it.”

While some residents hope to one day see commercial flights offered at the McKinney National Airport, Huffman said it is possible but unlikely due to runway length and other constraints.

“[The McKinney National Airport’s] main business model is the corporate aviation sector as well as recreational users and the school [with] LeTourneau [University] and their operations out of McKinney,” Huffman said. “… I don’t think McKinney becoming a commercial service airport would serve the region well.”
SHARE THIS STORY