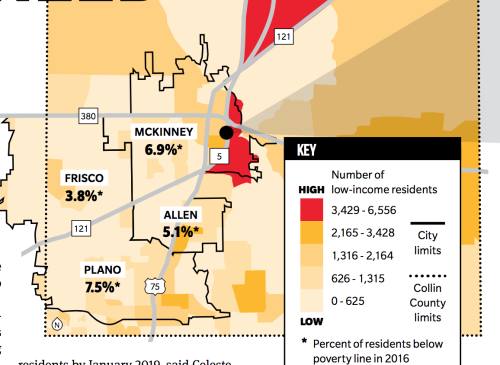 Editor's note: A graphic with this article has been updated to remove St. Mark Baptist Church from the list of food pantries in McKinney.

Following a divorce and a difficult family situation, former Frisco resident Faron Marion found himself in a tough position. After rehabilitation for a drinking problem, Marion had no job and no home. He found his way to the Samaritan Inn in December where he has since found a job and begun training for a managerial position at a local restaurant.

Marion is one of many who find themselves in McKinney because of the numerous services available for low-income, homeless and otherwise struggling individuals. He said he was looking for a hand up rather than a hand out, which is what he found.

“They helped me out in a time where I needed help,” he said. “… I’m not a bad person, I just did bad things, and now I’m on the other side of that.”

The Samaritan Inn is one of many services available for low-income and homeless individuals and families in McKinney. There are at least 17 services in the city ranging from community services to food pantries, according to the Collin County Homeless Coalition.

“When you look at the number of initiatives here in McKinney and the people not only who lead them but support them, it might be a barometer on the heartbeat and the culture of that community,” CEO of The Samaritan Inn Rick Crocker said.

Location, need and community support are among the reasons many of these businesses locate in McKinney, according to local nonprofit officials, and more services are on the way.

A portion of the 75069 ZIP code in McKinney has between 3,429 and 6,556 low-income individuals, according to the 2011 American Community Survey from the U.S. Census Bureau. This area runs east of SH 5 from McKinney’s southern border north to Weston Road encompassing areas around the McKinney National Airport. The only other portion of Collin County with the same concentration of low-income individuals is seen in part of Melissa and Anna along SH 5, according to Census data.

Part of the 75069 ZIP code is also home to a handful of nonprofits and services, including Community Food Pantry and the soon-to-be Community Garden Kitchen, a nonprofit serving daily meals to those in need.

Community Garden Kitchen’s facility will be shared with Holy Family School on Throckmorton Street and used by the kitchen in the evening as a place to prepare and serve meals.

Community Garden Kitchen is raising money to build its space and hopes to start construction at the beginning of 2019, President Angela Poen said.

Family Health Center at Virginia Parkway is also hoping to serve more residents by building a larger facility on the east side of SH 5 by the end of 2019.

The health center, currently at 120 S. Central Expressway, Ste. 103 and Ste. 105, provides children and families medical care and dental service to uninsured individuals and those with Medicaid and Medicare.

Allen Patterson, CEO of Community Healthcare Center, which manages Family Health Center, said expanding in McKinney is needed due to the sheer number of residents living in the county at or below the poverty level.

Residential facilities and programs, such as The Samaritan Inn, are also planning to expand. The Samaritan Inn, located in the area of high need along SH 5, is building a new space, which is expected to be complete in late May or early June. The space will serve 226 people each night as compared to the 160 people served now, Crocker said.

The North Collin County Habitat for Humanity also plans to build 35 affordable townhomes out of repurposed shipping containers on land at the southeast corner of Fitzhugh and Bumpas streets.

Habitat will build a prototype of the Cotton Groves development in May or June with the first units open to residents by January 2019, said Celeste Cox, CEO of North Collin County Habitat for Humanity.

According to the 2016 American Community Survey, there are approximately 62,600 people in Collin County living below the poverty line, which for a family of four is an annual income of $25,100 as of 2018.

As the county seat, many county services are located in McKinney, said Stephanie Tyson, co-founder of Bridges that Unite, a McKinney nonprofit that advocates for and educates those experiencing poverty or instability. With county health care and human services located nearby, other services and nonprofits choose to locate in McKinney, which causes people in need to navigate toward the city.

Other services, such as Community Garden Kitchen, locate in McKinney to be close to the area of highest need.

Community Garden Kitchen will be located within 3 miles of the area of highest need, which will allow people to walk to the facility, Poen said.

When it comes to developments and services catering to low-income individuals, McKinney City Council takes the projects on a case-by-case basis, council members Chuck Branch and La’Shadion Shemwell said.

The city of McKinney has no policy or strategic plan in place for addressing issues pertaining to homeless and impoverished individuals, Shemwell said, but many of the nonprofits and projects receive funding, city support or council approval.

Various projects, such as Habitat for Humanity, Bridges that Unite and The Samaritan Inn, have received community development block grants and, in some cases, municipal grants from the cities of McKinney, Frisco and Plano.

Branch said it can be easier for such services to come to McKinney because other nearby cities have more strict master-planning for development in place.

In 2010 The Samaritan Inn looked to open a new facility in east Plano. After council and residents raised concerns about the impact the facility would have on the surrounding area, the inn rescinded its request, said Steve Stoler, spokesperson for the city of Plano.

The Plano community’s response is not unusual, Crocker said, because people have the idea that a development like this would negatively impact real estate value or increase crime in the area.

“It’s called NIMB—not in my backyard,” he said. “We had served so many people from Plano. … We thought that it made sense to have a place in Plano, but again, because of the reaction, the negative response and reaction to the idea [the inn withdrew its request].”

After withdrawing from Plano, the inn found property in McKinney near its current location.