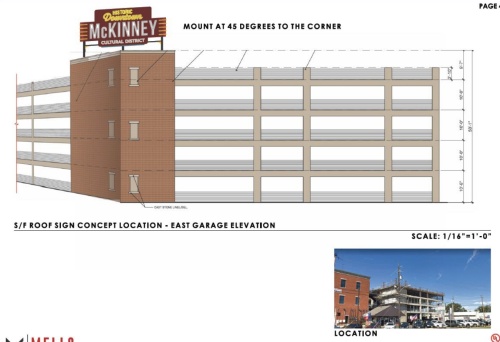 McKinney City Council made an exception to a city ordinance, allowing three neon signs to be installed in downtown McKinney.

These signs are being installed to promote downtown, which received a Cultural District Designation from the Texas Commission on the Arts last year.

With this designation, McKinney is eligible for funding from the commission to enhance and promote downtown through signage. The McKinney Community Development Corp. has also approved grant funding for this project.

One sign stating "Historic Downtown McKinney Cultural District" will be placed on a pole near Mitchell Park, according to concept plans submitted to the city. This sign will be visible to traffic coming into downtown.

Another sign will be attached to the side of the new Chestnut Commons Parking Garage, located at 202 S. Chestnut St. This sign will be facing Chestnut, and will direct traffic into the garage for parking.

A third sign will be placed on the rooftop on the east side of the garage, facing SH 5.

"The sign would be angled to help capture a lot of traffic," said Amy Rosenthal, McKinney Main Street program director, at a Sept. 3 City Council meeting. "There are 50,000 cars that travel on highway 5 each day, so [it is] really a visible sign to say, ‘Hey, we are open, and here we are.’”

Prior to the Sept. 3 meeting, neon signs were prohibited in downtown McKinney, due to a city ordinance. However, the council made an exception to permit these signs and unanimously approved the request during the meeting.

Last year, a similar request for an electronic business sign was denied at an Aug. 21 City Council meeting. At the meeting, more than a dozen citizens voiced their opposition against the sign during a public hearing saying the sign would take away from the historic feel of downtown, according to previous Community Impact Newspaper coverage.

However, no one spoke in opposition of the new signs during the Sept. 3 meeting.

The new sign near Mitchell Park is expected to be complete by Nov. 25 in time for the Home For the Holidays event, which is set for Nov. 29-Dec. 1 in downtown McKinney.

The other signs are expected to be complete at a later date.