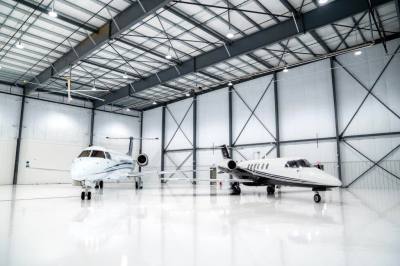 The McKinney National Airport opened at 40,000-square-foot hangar in May.

A new hangar opened at the McKinney National Airport in April. The 40,000-square-foot facility is the largest hangar at the airport and is fully leased, according to a news release.

The hangar, built through a public-private partnership with Western LLC, will store up to four Gulfstream G-550 aircraft, eight enclosed parking spaces for car storage and office spaces, according to the release.

“Everything you can measure at the airport is trending up, from operations to fuel sales," Airport Director Ken Carley said in the release. "This public-private partnership with Western LLC allowed the city to capitalize on their expertise and reputation as a well-respected developer in the aviation industry while helping us meet the demands of new businesses pouring into Collin County and the larger Dallas area."

This is the second hangar the McKinney National Airport has opened in less than two years. A 10,000-square-foot hangar opened in December 2017.