Some McKinney businesses slower to open as number of permits, inspections increase 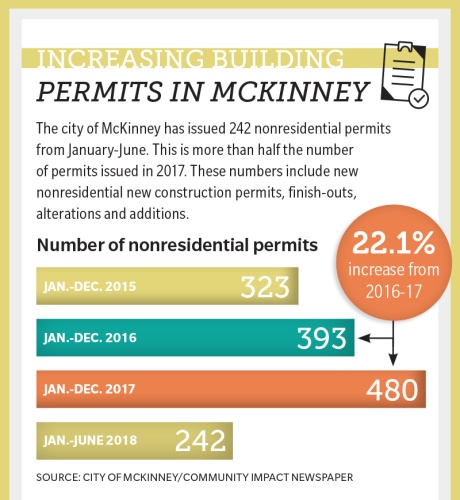 The city of McKinney has issued 242 nonresidential permits from January-June. This is more than half the number of permits issued in 2017. These numbers include new nonresidential new construction permits, finish-outs, alterations and additions.

Business owner Haley Kirk opened 31ten Boutique in downtown McKinney on May 6. Kirk originally anticipated an opening date in April but said she experienced delays in receiving a building permit.

“It took, to get the [building] permit just looked over, it took a month, which we hadn’t planned on,” Kirk said. “… And then from there it was quick and easy. I know some people did run into issues scheduling their inspections with [the fire department].”

According to city documents, Kirk requested her permit on March 17. By April 20 the permit was approved pending Kirk adding the name of a subcontractor to her documents. Kirk received the permit April 24.

“The nonresidential growth that we’ve seen over the last year is kind of unprecedented in McKinney,” said Michael Quint, executive director of Development Services for the city. “… I think it’s a bunch of pent-up demand, that we’ve kind of been kind of underserved on the nonresidential front for a long time and folks are finally taking note here in McKinney.”

When requesting a permit, the applicant or business owner must go through a variety of steps and work with a handful of different city departments, some of which are conducting next-day inspections and others that are weeks behind, Quint said.

The building inspections department, for example, conducts next-day inspections for all businesses if the necessary paperwork and people are on-site during the inspection, Quint said. However, the fire inspection department has seen significant delays.

“In my 35 years, I haven’t seen anything like this,” said Mike Smith, fire marshal with the McKinney Fire Department. “... At any given time we may have 400 submittals. It makes it tough because we’d like to get those done in a timely manner, but they’re coming in so fast we get backed up and people are having to wait.”

From January 2016-December 2017, the city saw a 22.14 percent increase in the number of nonresidential permits requested.

“When you get so many, upwards of 400 requests [in the queue at one time], people are going to have to wait sometimes up to four weeks to get an inspection,” Smith said. “… The ideal time that I would love to see it down to [is] seven days [from when] they made the request.”

“All staff members can do inspections as well [as] plan reviews, but [we] also serve as fire and arson investigators and we do all the background for all the new hires,” Smith said.

The administrative assistant handles all scheduling for the fire inspections, helps process permits and is making 150 phone calls in a given day, Smith said.

Some business owners, such as Lys Childs-Wiley and Shado Wiley, who recently opened Carpe Diem Comics in downtown McKinney, said city staff warned them to expect delays in scheduling a fire inspection.

“The city originally told me [the fire department was] like a month behind,” Shado said.

He said he was pleasantly surprised when it only took a week from requesting the inspection to completion.

Kirk said she was also warned about the delay.

“I know some people did run into issues scheduling their inspections with fire,” Kirk said. “... But we were really hoping as soon as possible. So, luckily when I called they had an appointment next week. But even the lady at permits was like, ‘Sometimes it takes them up to six weeks [for them] just to come around.’”

During budget approval in October, the fire department plans to ask City Council for additional funding to hire four new inspectors and a permit technician to help with the increasing work-load, Smith said.

In January the McKinney Fire Department adopted a new fee schedule for inspections, plan reviews and permits. Fees include $100 for the department to review revised plans, and at least $50 if a reinspection is needed.

Smith said the fee increases change the city’s revenue drastically, which will help offset the department’s growth and allow the department to add additional staff members.

Quint said he and city staff are committed to exceeding the expectation of business owners, developers and anyone who is looking to do business in McKinney.

To accommodate for growth, the city launched a new land-management software system called EnerGov in October. The online system is intended to streamline the process for developers, improve the data quality and increase public access to information provided by the development services division.

The software also offers a citizen self-service portal that will allow the community and developers to apply for permits, request inspections, create new development cases and view real-time data on their respective projects.

Since October, Quint has given multiple presentations to council about the program and addressed the majority of the issues, he said.

One issue Quint and Smith are hoping to address is the communication between EnerGov and the fire department’s software, Firehouse, because the two are not compatible.

Smith and development services staff conducted a five-week process study about how the two departments and softwares work together.

Currently, the fire department is using EnerGov for all inspections and certificate of occupancies then copying the document over to Firehouse so emergency services can have access to the necessary documents when they are out in the field, Smith said.

“The next update we provide [to council] will either ask for more resources to expedite even more fixes to EnerGov or to close the loop with the City Council by letting them know that we will not be asking for additional resources,” Quint said in an email. “I’m working with our [Information Technology] department on all of this.”
SHARE THIS STORY