The McKinney Economic Development Corp.'s new Innovation Fund looks to incentivize companies of all sizes to do business in McKinney. (Courtesy Adobe Stock)

From the development of health care software to an artificial intelligence for land and title transactions, the McKinney Economic Development Corp. Innovation Fund is attracting businesses to the city that are creating a new kind of economy, one designed to catch the eye of larger technology companies.

MEDC President and CEO Peter Tokar said the grant program is changing the perception of the city. Where it was previously seen as a rural, industrial community, he said, McKinney should now be viewed as a city that supports innovative technology companies.

Introduced at the beginning of 2020, MEDC’s Innovation Fund has attracted a flurry of technology startups that would not necessarily have qualified for traditional economic incentives. In less than 12 months, the fund has drawn and assisted in the expansion of 13 technology businesses. It has also brought McKinney the promise of 300 new jobs so far with an average salary of $86,000.

“The Innovation Fund is the snowball that’s going to create this avalanche, hopefully, that comes in the future from the tech world and building that innovation economy,” Tokar said. 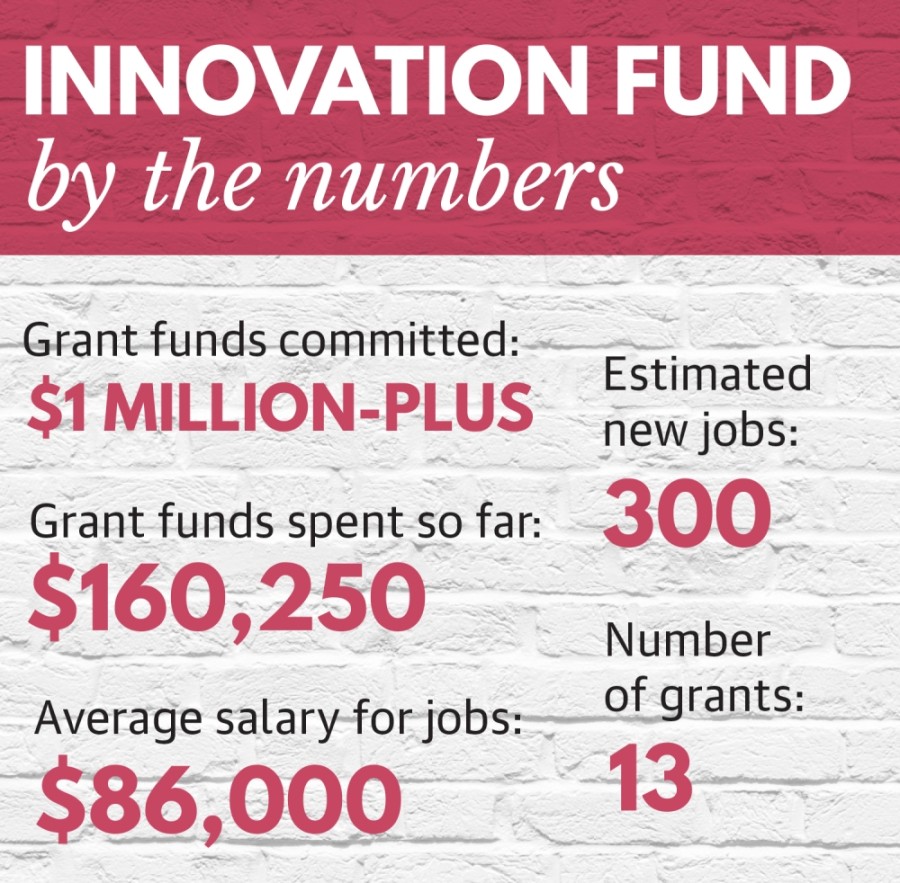 As part of its October financial document for the MEDC board of directors, the corporation reported it has approved a little more than $1 million in grants for seven of the eight companies that have been announced as qualifying through the Innovation Fund. Per the October financial report, $160,250 has been spent on six companies. In order to receive the full amount allocated to them, companies have to fulfill all requirements of the MEDC agreements, and grants are generally distributed over the terms of the agreements.
RELATED STORIES

Once a “critical mass” of technology startups is reached, as Tokar said, the hope is that bigger tech companies will look at moving to McKinney.

“We’re now providing job opportunities that the growing residential population, the citizens of McKinney, can potentially take advantage of,” Tokar said. “Those employers can come in and take advantage of that skilled workforce that we have here in droves.”

While MEDC’s primary task is to promote economic development by creating incentives for new and existing businesses to grow locally, the Innovation Fund is designed to attract different types of companies and create job opportunities.

“We look to get companies that are at the ideation stage, or ‘pre-seed,’” Chavez said.

A list of eligibility requirements and an application form for the Innovation Fund are available on the MEDC website. Among the requirements, Chavez explained, is that applicants must offer an average salary of over $60,000 per year.

MEDC has received applications from companies in various industries, such as software-as-a-service, artificial intelligence, data analytics, digital arts and more, he said.

Chavez said workforce analytics show most of the existing technology employees in the metroplex already live in Collin County. Plus, McKinney’s proximity to other cities, such as Frisco and Plano, that have numerous corporate headquarters already, make it a desirable location for new businesses interested in expanding.

“There’s all those decision-makers right down the road [so] that if you want to create a product that’s scalable, you can go talk to them directly,” Chavez said. “What’s good for Allen, Plano [and] Frisco is good for McKinney.”

Alanna.ai, an artificial intelligence and software-as-a-service startup, was already in McKinney when it received its grant from the Innovation Fund in October. The startup is using the funds to expand the company’s headquarters and hire 20 new employees.

“It’s phenomenal to be able to have a little bit of extra support from the local community,” Alanna.ai President Hoyt Mann said.

As a software company that draws business from the entire nation, startups like his are not always a priority for cities, he said.

“As a startup company, you’re just always on that shoestring-tight budget, and every dollar matters,” Mann said. “[The Innovation Fund] has really helped us to find and attract some talent that, normally, we just wouldn’t be able to hire.”

Invene CEO James Griffin, who grew up in McKinney, said he was surprised to learn about the MEDC’s initiative aimed at startups. His health care software development company received an Innovation Fund grant in July to move its headquarters to McKinney. It had previously been set at The University of Texas at Dallas Venture Development Center in Dallas.

“It never occurred for me to come back and headquarter my business in the city,” Griffin said via email. “However, once the MEDC approached me and told me their vision of making this area a center of innovation excellence, it was exciting and seemed like a perfect fit.”

Griffin said he believes the MEDC’s vision for making the city a technology hub will benefit his company as the local industry grows.

Tokar said MEDC officials see the Innovation Fund as one of the first steps of reshaping the business community of McKinney to more closely match the city’s demographics. Going forward, the MEDC is targeting businesses that can help shift McKinney’s economic makeup and allow its employees to reinvest in the city.

“We will continue to help any business that wants assistance, but we just may not be able to financially participate in the recruitment or the expansion of a business that doesn’t meet that target industry perspective,” Tokar said.

McKinney City Manager Paul Grimes said the city is excited about the Innovation Fund because of its relatively modest cost for fostering startup innovation in the city.

“The engine of American economic growth has always been innovation and [entrepreneurship],” he said. “We want to foster that environment here because that’s where the creativity and the innovation comes from.”

The fund is also expected to better position McKinney for the future of the digital economy, Grimes said.

“That’s important because that’s where the economic growth is going to be,” he said. “Texas should be positioning itself as much as possible for the digital era, and [we are going to do] everything we can do to try to preserve the ability to innovate.”

Applications and eligibility information for the Innovation Fund can be found on the MEDC's website, here.

Jagours, Hassler, Green, Oaxaca to take seats on McKinney ISD board of trustees

See election results for McKinney ISD board of trustees positions.

Unofficial election results on May 1 show the incumbent candidates defeated their challengers in the races for Collin College board of trustees seats.

On the ballot, voters were asked to ratify the ad valorem tax rate of $1.5064 per $100 valuation for the current school year.

McKinney voters decide how district pays recapture in May election

Because of a state law change, MISD had to ask voters to approve the process it uses to make recapture payments to the state each year.