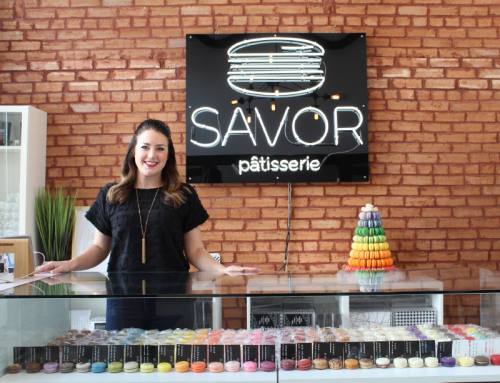 A patisserie is a French bakery, Watts said. Macarons, which date back to the 1700s, consist of light and brightly colored sandwich pastry shells filled with a sweet, creamy center, she said.

Watts said she started baking macarons at home in her spare time, learning from a cookbook as well as through trial and error. Once she perfected her own unique recipe, she began selling her macarons at the Dallas farmers market. She said she soon realized it was time to open her own shop.

“It’s been an adventure,” Watts said. “I didn’t have any sort of culinary background. I never went to culinary school. I just liked to bake for fun for my whole life.”

Then, she said, she “became completely obsessed” with macarons.

Now Watts owns four Savor Patisseries. The first opened in Dallas in 2016. A second shop opened in Fort Worth in 2017, and that was followed shortly by the opening of the McKinney location. A second Dallas location launched earlier this year.

Macaron shells are made from a batter of egg whites, sugar and almond flour, Watts said, and all are naturally gluten free. The insides are often filled with flavored buttercream, fruit curd, jam, Nutella, ganache or other fillings.

Savor offers 27 core flavors that are available year-round in all stores and online, including classics such as raspberry, pistachio, vanilla, salted caramel and chocolate as well as more creative flavors, such as s’mores, rosé, honey and matcha.

Savor rolls out special collections multiple times a year. The most recent was themed after movie theater snacks and included buttered popcorn, Sour Patch Kids and Hot Tamales. In October, a collection of Halloween candy flavors will be available, Watts said.

Customers can stop by the shop to get macarons to-go. Savor also offers macarons made-to-order with custom colors, flavors and designs, including pictures and monograms. Dye-free and dairy-free options are also available.