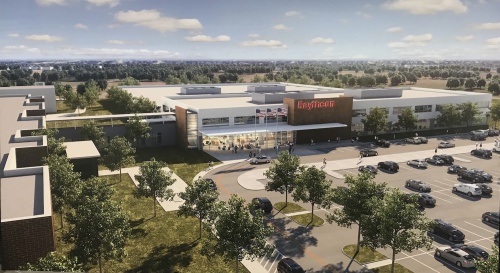 Raytheon will build a new facility at its Space and Airborne Systems headquarters in McKinney.

A new 200,000-square-foot facility will be built at Raytheon’s Space and Airborne Systems headquarters in McKinney. The new facility, which is expected to be complete in late 2020, will support 500 new high-tech jobs, according to an Aug. 22 release.

“This is an investment in the talented McKinney workforce,” Raytheon SAS President Roy Azevedo said in the release. “It shows we are serious about our presence in Texas and that we are here to stay.”

The headquarters, located at 2501 W. University Drive, McKinney, specializes in surveillance, intelligence and recon systems, according to the release.

The McKinney Economic Development Corp. has approved a support package for Raytheon. The two organizations are finalizing details on a $6 million-$7.5 million incentive agreement, MEDC president and CEO Peter Tokar said in an email.

Raytheon’s North Texas operations contribute $4.8 billion to the Texas economy, according to the University of North Texas Economic Research Group. This group was commissioned by Raytheon.

In 2018, the company employed approximately 3,600 workers in Collin County and brings in $41.2 million in state and local tax revenues annually, according to UNT.

“Raytheon’s North Texas operations are a powerful economic engine,” said Michael Carroll, the director of the Economic Research Group at UNT, in the release.

Raytheon is McKinney’s largest employer. The SAS headquarters has been in McKinney since 2013, Azevedo said at the announcement Aug. 22.

“McKinney has always been proud to have the prominent presence of Raytheon … and we are excited at the opportunity for new corporate expansion in McKinney,” McKinney Mayor George Fuller said in the release.

Founded in 1922, Raytheon specializes in defense, government and cybersecurity systems throughout the world, Azevedo said. Raytheon's SAS division also has locations in Plano and Dallas.

Editor's note: Raytheon was founded in 1922, not 1972 as previously reported. This article has been updated to include information from the McKinney Economic Development Corp.
SHARE THIS STORY