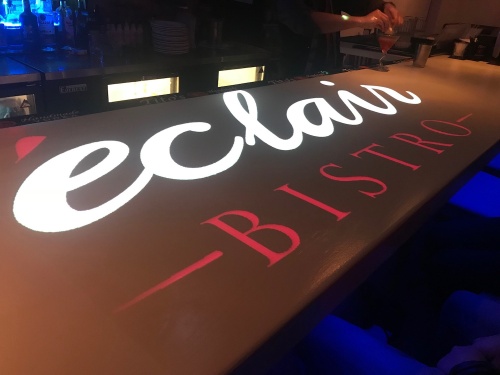 Éclair Bistro is now offering projection mapping dining and an interactive lounge experience at its restaurant in downtown McKinney, which is located at 216 E. Virginia St.

Projection mapping uses projectors set above tables to showcase a variety of visual displays on the table and plates.

This new concept is offered through a partnership with Texas Instruments and Optoma Technologies to "transform a seemingly average restaurant table into an entertainment center," according to a press release from Éclair Bistro.

Projection mapping is offered every night at Éclair Bistro and can be used on large tables with up to six guests or for smaller tables for up to two guests. However, there are a few tables with no projection for those who are not interested, owner and chef Aaron Thomas said.

During a seven-course Chef's Choice tasting menu, projections will be displayed on the table and plates with calm animations shown when food is presented and a more elaborate presentation in between courses.

The projections can also be customized for events and special occasions, Thomas said.

"This is kind of us now," Thomas said.

Éclair Bistro combines traditional French cuisine with the contemporary influences of New Orleans. The restaurant also offers live jazz music on Friday and Saturday nights and opened a martini bar above the restaurant in December 2016.

More information about the restaurant can be found in Community Impact Newspaper's previous coverage here.