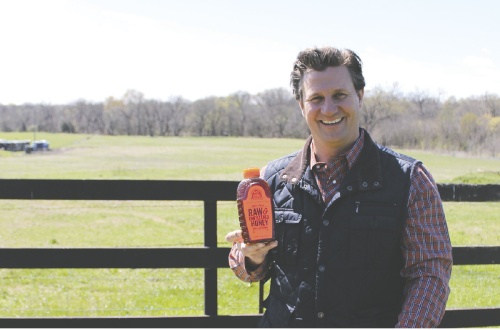 As the owner of a honey company, Nathan Sheets put his title as president on his business card. But Sheets also has a second title on his card: chief steward.

“I don’t view myself as a CEO,” Sheets said. “I think God is the CEO. I view my responsibility as stewarding the resources and the people in the company that God has given to us for his purposes and not mine.”

Sheets said he credits his faith for the success of his honey company, Nature Nate’s Honey. The company began in 1972 and was originally called North Dallas Honey Co. Sheets did not become involved in the company until 1996 when his wife suggested the two of them find a hobby together.

Sheets got the idea to try beekeeping after seeing a TV commercial that showed a woman wearing a bee suit. He researched beekeeping and found North Dallas Honey Co.

Sheets contacted the owner at the time, Fred Richardson, and asked if he could buy a beehive from him.

“So I bought it, but we lived in this little apartment,” Sheets said. “So I asked my parents if I could put a beehive in their backyard.”

Sheets’ parents allowed him to move the hive to their backyard. By 1997, Sheets started helping Richardson keep up with all of his beehives.

One day Richardson proposed that Sheets buy the honey company. Sheets was already working full time at a design agency, but he still decided to buy the company in September 1997.

A few months later Sheets went into full-time ministry. But the stress of the ministry started getting in the way of his family, he said. By June 2010, his only job was the honey company.

The company wasn’t financially stable enough to support his family, Sheets said. Sheets and his wife agreed to pray about it for two weeks, and one morning the two were reading Psalm 81 in the Bible.

A week after reading that verse, a buyer for Wal-Mart called Sheets and asked if he could supply honey for the stores. The total for Wal-Mart’s first order came to $107,000.

“We have just been incredibly blessed with God giving us increased sales and growth of the company and always bringing in the right people at the right time,” he said.

Sheets said he prides his honey on being raw because it is heated to 120 degrees and contains pollen. Other companies heat honey to 140 degrees or more to remove the pollen, Sheets said.

“The honey is a carbohydrate, and the pollen is protein,” he said. “So it’s actually the only food you can eat that has both carbs and protein.”

Sheets said he aims for his honey products to be as pure as possible.

“We want to make it as real as coming out of the beehive as we’re able,” he said.

Sheets said he wants to provide a high-quality product that offers health benefits and points back to his faith.