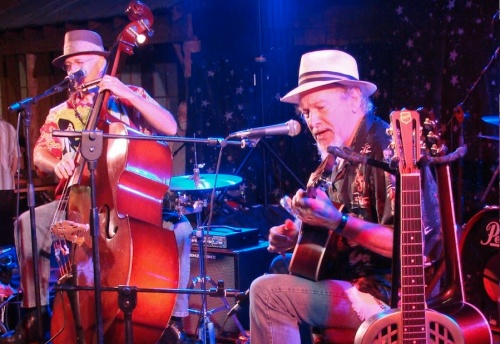 The E-Flat Porch Band of McKinney has made the biennial roster for Texas Commission of the Arts tour continuously since 2001.

The E-Flat Porch Band of McKinney is on the Texas Commission on Arts tour roster for 2018-20. The band has been on the roster continuously since 2001 and is the only musical group on the roster from Collin County, according to a TCA press release.

Guitarist Duane Brown and bass player Rudy Littrell form the core of the band and have been playing together for 20 years. They named the band for the porch in McKinney where the members first practiced, which resonates to the key of E flat, according to the band’s website. The act plays a blend of acoustic porch music, including folk, blues, early country, jazz and original tunes.

“There’s an amazing variety of talent represented on the roster, and we are honored to be included on it,” Brown said. “It allows us to share our blues music by traveling to communities all over the state, from Canadian to Clute to Claude.”

The E-Flat Porch Band is among 125 Texas artists and art companies approved to be on the TCA roster. Inclusion on the Texas Touring Roster is for two years, and it includes artists who have been deemed the best in their field by a panel of statewide experts, according to the release.

TCA does not provide any funds directly to the artists on the tour roster but instead provides grants to arts presenters, schools, libraries, theaters and other nonprofits and government units throughout Texas to help with the cost of bringing in companies and artists from the roster, the release said.

“In addition to performances, they may also conduct workshops, master classes, residencies, lecture-demonstrations or arts education components as a way to engage community residents,” TCA Executive Director Gary Gibbs said in the release. “We are proud to offer the citizens of Texas access to such high-quality artistic talent.”