The Denton County Transportation Authority board voted July 22 to launch a new GoZone on-demand service through Via using vans and a mobile app. (Courtesy Andy Ambrosius of Via)

The service will launch Sept. 7 with 32 vans operated by an agreement through a private company called Via. The service would be available 365 days a year. Fares approved for the first six months of operation range from $0.75 in cash for a single ride to $3 for a day pass with monthly and annual passes available.

Board members also voted to continue the fixed route bus services in Lewisville and Denton for 90 days beyond Via’s start date to educate riders about the changes. That extension also allows time for troubleshooting any issues, according to board discussion with staff. That vote came after some concerns from the public as well as the Denton City Council about the change in services and the effects on riders.

DCTA plans to have someone aboard each fixed bus route every day for six weeks beginning Sept. 7 to help educate riders about the changes, per the board's vote of approval.

Lewisville Mayor TJ Gilmore, who is also a DCTA board member, said the new service will expand public transit options in his city.

“When you look at Lewisville’s numbers, we’re serving less than a 10th of a percent of our population,” Gilmore said of the current bus system. “Transit should be for everybody. And Via gets us there in Lewisville.”

He said when comparing the number of people living within a quarter-mile of the fixed bus routes and the number covered by the new GoZones, it’s a 50% increase in availability for Lewisville. Riders would have more options with Via to get to more places, which means access to more jobs, he said.

“When I talk to my business community and they see some of the options available with the Via, it’s amazing,” Gilmore said.

DCTA board member Dianne Costa, who represents Highland Village, said her city also supports the changes. “We feel like it is a win-win,” she said.

The board also voted to end DCTA’s on-demand services on Sept. 6. Those include the Highland Village and Lewisville to Flower Mound Lyft programs. Both of those services have had low ridership, according to DCTA staff. Also ending are the Downtown Denton Transit Center Evening On-Demand Zone and the Lewisville Lakeway On-Demand Zone. Those who use those services will be notified of the switch to the new Via service.

The Via on-demand service allows people to request rides through a mobile app. Trips can also be booked over the phone or in-person at the Downtown Denton Transit Center. Via trips are allowed within specific zones within Denton, Lewisville and Highland Village. Trips are not allowed between the different zones.

Flower Mound is not a member of the Denton County Transportation Authority and is not included in the new services.

Editor's note: This story has been updated to correct an error. It should have said monthly and annual passes are available. 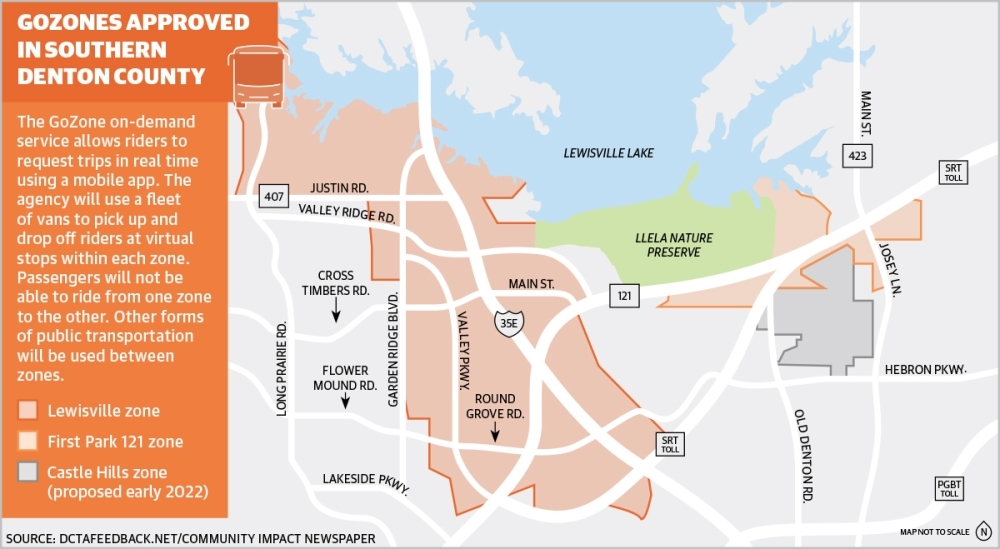