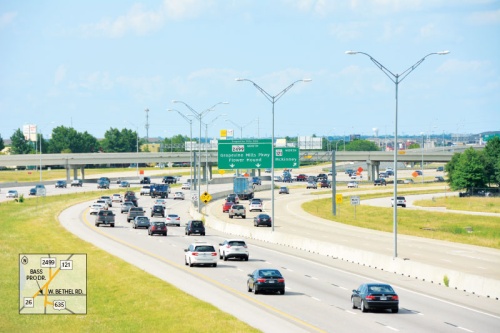 A new SH 121 interchange at FM 2499 will be constructed as part of the upcoming $370 million project.

The $370 million Texas Department of Transportation project includes rebuilding and widening SH 121 north of the Dallas-Fort Worth International Airport to accommodate new interchanges for SH 121 at I-635 and FM 2499. The Bass Pro Drive bridge in Grapevine will also be widened to six lanes and reconstructed along with the frontage roads. The project is expected to be complete in 2022.

Texas Transportation Commission Chair J. Bruce Bugg Jr. said the project will improve mobility for drivers who travel through the SH 121 bottleneck between I-635 and FM 2499.

The upcoming interchange project and several other unaddressed projects were originally part of the DFW Connector, which overhauled and widened SH 114 and SH 121. The projects were delayed when only $1 billion was made available for the $1.6 billion Connector.

Although the project limits fall within Grapevine, Flower Mound-bound drivers will benefit from the FM 2499 interchange as the new interchange, which leads drivers into Flower Mound, will be widened, according to TxDOT spokesperson Michael Peters.

Flower Mound resident and former Council Member Don McDaniel said this project is beneficial as traffic will continue to increase on FM 2499 in the coming years.

“As the number of cars on 2499 increases with the connection to 35E at the north end and the continued growth of our northern neighbors, the throughput of this roadway will become increasingly important,” he said. “Removing the restriction at 121 and at the eastbound connection to 635 are critical aspects of this plan.”

Many area residents told Community Impact Newspaper they are unhappy about having to endure four more years of construction after continuous work since 2010 on SH 121, which many motorists use to reach Dallas.

Lewisville resident Michael Daly said he was hoping TxDOT would wait a little longer before work began in the area as it wasn’t too long ago that FM 2499 main lanes were reconfigured. The FM 2499 project, which also included adding frontage roads and rebuilding intersections, started in 2013 and ended in 2016.

SH 121 between Star and Stripes Way in Grapevine and the Business SH 121 split in Lewisville was recently widened to 10 lanes. The project began in March 2014 and was substantially completed in January of this year.

With 119,000 vehicles per day traveling on this segment of SH 121, Peters said drivers will more than likely be looking for alternative routes.

But TxDOT does not have any suggested alternative routes to avoid construction, Peters said, however, the state agency will limit its impact as much as possible on drivers.

“There will be lane closures necessary for construction,” he said. “To minimize the impact to the traveling public, lane closures will not be scheduled during commute times, but instead will be scheduled at night or off-peak travel times. When necessary, traffic will be detoured to an alternate route.”

For Flower Mound residents seeking some relief from FM 2499, there may be hope in the future.

Flower Mound Public Works Executive Director Tiffany Bruce said the town’s thoroughfare plan includes proposals to widen Lakeside Parkway so it can be used as an alternative route and direct connection to SH 121.