Q&A: Russ Kerbow retires after 40 years of service in the Lewisville Police Department 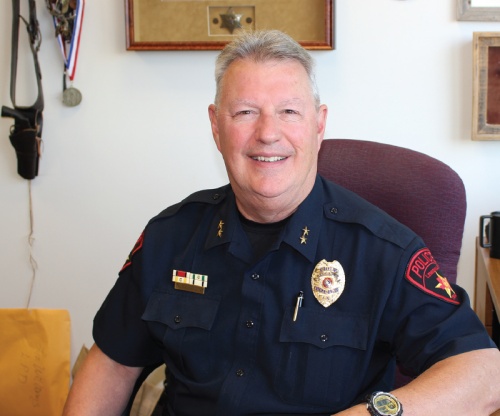 How did you get started in law enforcement?
It’s kind of funny actually. I grew up in Lewisville, and I had local jobs. My last job before working here was at 7-Eleven, and I was the store manager there. I knew a couple of guys that were working for the police department at the time—that I knew from high school—and they would come in to get a soft drink or whatever and take a break, and we would talk. I was kind of an outdoors guy anyways, and they said, ‘You’d really probably enjoy being a reserve police officer.’ So I did that, and I went to the reserve academy, got sworn in like September of 1977 or something like that, and continued to work for 7-Eleven. I’d [go and] volunteer for the PD, and I really just fell in love with the service aspect of it. It’s really a chance to be there for people whenever they are having a bad day, and I just fell in love with it. They had an opening the following spring and I put in for it, and they gave me a shot, and I haven’t regretted it since.

What has been your favorite part of the job?
It’s really just helping people—that’s the most important thing—and the camaraderie that you kind of build with your coworkers. It’s a little bit like the military in that we have ranked structure, but you’re serving long hours with people doing the same kind of job, and you build that bond with the people that you’re counting on to back you up and protect you and vice versa. That mutual trust is really important, so you build a lot of really great friendships along the way.

What has been the most challenging part of your job?
The most challenging part is having to keep up with the current trends. There is always new technology and techniques available, and we just have to keep up with not only the best technology, but equipment and the best practices. In fact, that’s one of the things I am probably most proud about my legacy here as chief, is we got involved in the Texas Police Chief Best Practices Recognition Program. It’s a series of 104 separate standards that you have to meet in order to be recognized. Our first recognition was in 2008, and ... we just got recognized for the third time this year.  It just kind of helps to keep us on our toes. We always thought we were a good department, but we knew with something like that it ensures that we can meet those standards, and it gives the public a kind of insurance that it’s not just us saying that we are good, or any one citizen that we serve saying that we’re good; it’s some third party out there judging us.

Are you ready for retirement?
I think so. I knew when I got the appointment as chief that I probably would want to do about 10 years anyway, and that’s the goal I had set. You know it’s been 40 years, and it’s time to let somebody else take the baton and run with it from here. One of our assistant chiefs, Kevin Deaver, has already been named as the next chief, and he’ll take over on Aug. 22, and that’s my last workday, so it’s a real smooth transition.

What are you going to do in retirement?
I am going to be traveling. My wife retires at the end of this year also. She’s the Justice of the Peace for Lewisville and Highland Village, and this is her 20th year in that job, so when she finishes this term she is done at the end of December and then she’ll be off come Jan. 1, so we are really looking forward to traveling together. We already have a cruise planned in August, and then we have a trip planned to Santa Fe, New Mexico.

What do you think you’ll miss the most about being police chief?
I think the people more than anything. You know, it can be one of those jobs that can appear thankless from time to time, but I always tell people, especially with all the events going on around the country in regards to other communities and their police departments, the support from our community here is just unbelievable. So, the people that we work with and the people that we serve is probably what I am going to miss the most.