This photo illustration shows the position of the log cabin hidden behind the walls of the renovated house in Flower Mound. (Photo by Samantha Van Dyke, illustration by Michelle Degard/Community Impact Newspaper)

Developer Curtis Grant said he had every intention of demolishing the old yellow house on Quail Run Road in 2015 to make way for a new subdivision in Flower Mound.

But when he knocked a hole in the living room wall and saw the old, stacked logs, he said he knew he had made a once-in-a-lifetime discovery.

Buried behind the walls was a log house erected more than 150 years earlier. Officials now believe it is the oldest structure in Denton County still standing in its original location. The town’s master plan describes it as being of “exceptional historical significance” with ties to Peters Colony, the earliest settlement in Denton County. Grant eventually donated the house to the town of Flower Mound.

Six years and nearly $2 million later, the house has been restored to an earlier design. The historical house museum is set to open to the public on Dec. 11.

The museum will feature several different rooms where visitors can be immersed in the history of early Denton County settlers. There is a living room, where the original log cabin stood, as well as two bedrooms, a kitchen/dining room and a work room in the back for staff, according to blueprints. There will also be an accessible bathroom on the property but outside of the home for visitors to use.
RELATED STORIES

• Take in a concert, join a holiday festival or plan a date night with these events in Lewisville, Flower Mound and Highland Village

“Visiting the cabin will be such a cool experience,” Flower Mound Mayor Derek France said. “It’s not every day that we’re given a chance to revitalize a structure so that we can use it to learn about the history of our area and how early settlers here lived.”

Grant’s decision to preserve the cabin rather than tear it down ultimately shaped the entire project.

“It just felt like it was the right thing to do for generations to come,” he said.

But back in 2015, standing in the living room with a hole in the wall, Grant said he had no idea the cabin held such historical significance. A friend connected him with Peggy Riddle, museum director for the Denton County Office of History and Culture.

Based on research Riddle had been doing on cabins from the 1800s, she said it was common for land grants in Texas to require owners to build a structure that was, at minimum, 16 feet by 16 feet, Riddle said. The living room was 16x16 feet, Grant said.

Research done by the Denton Office of History and Culture and McCoy Collaborative Preservation Architecture revealed the home’s original owner as William Gibson.

Gibson and his family moved to Texas in 1844, a year before Texas was admitted into the union and two years before Denton County was established. Gibson is believed to have built the one-room, post oak log cabin between 1860 and 1861, according to historical documents.

The house was sold roughly nine more times before being purchased by Grant, according to master plan documents. The log cabin was built over, with more rooms, a garage and a bathroom added later.

With the ownership from the deed records, Grant and Riddle then consulted with David Stahle from the University of Arkansas to help determine when the cabin had been built.

Stahle is a distinguished professor of geography who has done extensive dendrochronology research.

“Trees have annual rings,” Stahle said, “So you can just count the rings to see how old the tree is. But that’s not really the question, especially when you’re trying to date a cabin.”

To figure out what years the trees were alive and when they were chopped down to create the cabin, Stahle said he compared core samples that were taken from the cabin’s logs with a master chronology of post oak trees in the area.

“We have about 20 tree-ring chronologies of post oak in central and north central Texas,” Stahle said. “They’re all about 300 years long, and they’re all exactly dated, so this is a very robust history of tree growth and climate.”

“That’s dendrochronology—the most accurate and precise dating method in the world,” Stahle said. “It’s exact to the calendar year in which the rings were formed.”

Once the cabin’s age was confirmed, Grant decided to donate the structure and the land it sits on to the town. He also sold two plots surrounding the cabin for $454,098 to the town to allow room to convert it into a historical site. A $1.5 million grant from the state of Texas funded the master plan, design and construction work.

McCoy Collaborative Preservation Architecture was hired in 2017 and developed a master plan to restore the third phase of the home, now deemed the Gibson-Grant Cabin in honor of its first and final owners.

“The previous two periods [of the house], too much had been destroyed by the subsequent additions for us to bring it back to that,” said Andreea Hamilton, a senior associate with McCoy Collaborative. “We thought, and the Texas Historical Commission agreed, that the third period was where most of the existing historic elements were.”

Hamilton said the logs on their own are not structurally sound enough to stand alone, but the walls of the house will have glass cutouts so visitors can see the preserved wood.

The third period of the house was estimated to have been created between 1890-1910, and both the interior and exterior elements of the house are designed to match that era, Hamilton said. Some of the existing windows and porches were no longer in their original places, but Hamilton said crews were able to peel back layers of renovations to see where they originally stood so that they could be restored accurately.

“If certain historic elements are lost and we have no evidence as to what they look like, we’re not going to try to replicate [that],” Hamilton said.

She said McCoy is responsible for the home’s restoration, and the Denton County Office of History and Culture will provide the interior furnishings, artifacts and light fixtures.

“Everything is going to be original from the period,” Riddle said. “We have quilts and coverlets. The kitchen will feature kitchen utensils and a wood burning stove appropriate to that time period.”

Riddle said her office also has many donated pieces. A Flower Mound resident donated an antique brass oil chandelier that will be retrofitted to operate by electricity.

Opening to the public

Grant eventually sold the rest of the land to another developer, who built the neighborhood on the cul-de-sac behind the Gibson-Grant cabin. The newly renovated museum house is surrounded by modern brick houses ranging from $600,000-$750,000.

With its historic white siding and original red sandstone chimney, the old stands out among the new.

The house’s restoration is in its final stages, Flower Mound Communications Director Melissa Demmitt said. It will be open to the public for certain hours and may be booked for tours. Admission will be free.

“We are excited to get it open,” Parks and Recreation Director Chuck Jennings said. “We look forward to seeing our community members have the opportunity to visit, explore and learn something new.” 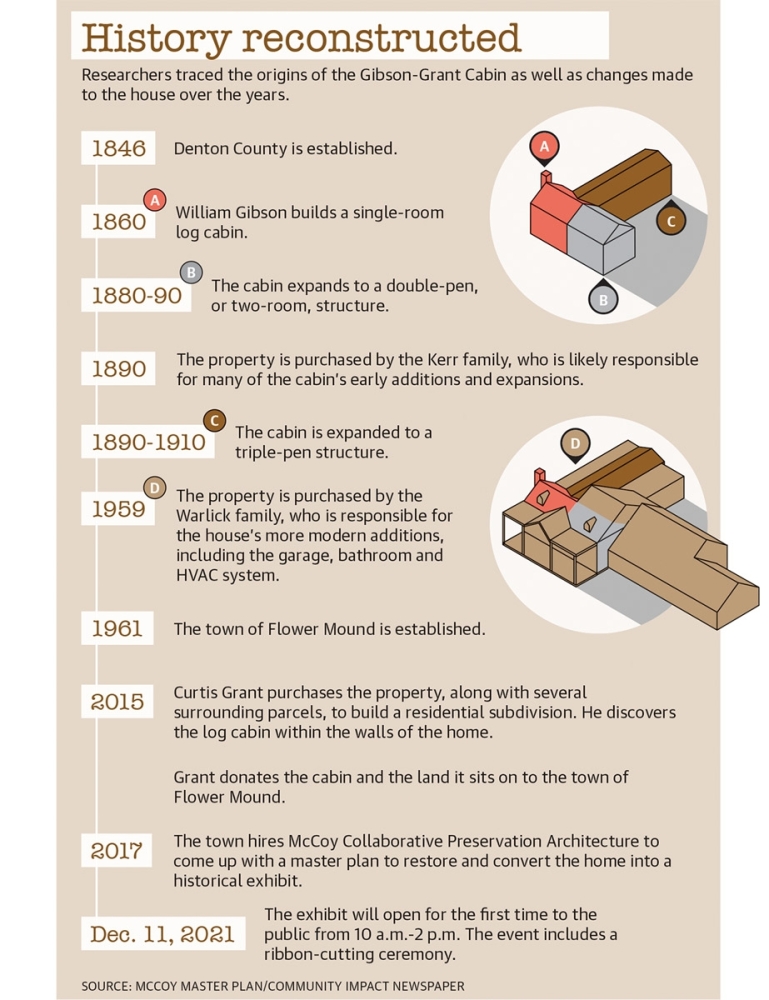 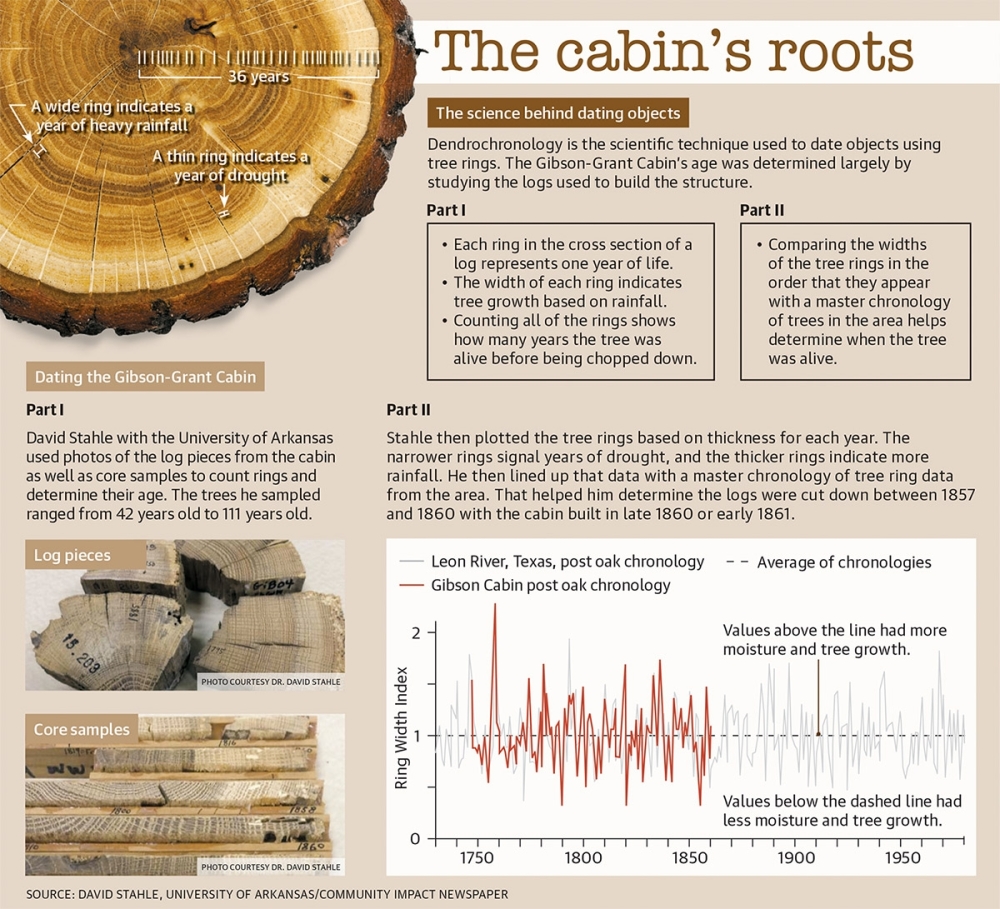 Sherwood Bedding to come to Lewisville

The mattress store signed a 10-year lease agreement to be housed at Austin Ranch.

City officials rely on public comments and suggestions to determine needs of residents and decide how to best use grant funds.

The Connect bus will stop running in Lewisville starting Dec. 24 as public transit service there shifts solely to the on-demand ride service GoZone.

New speed limit signs will be posted in neighborhoods over the next 18 months. The new speed limit will go into effect once a new sign is in place.

Robbie Cox has announced he will be running for Flower Mound Town Council Place 3 next year.